Oman's rich linguistic diversity is dwindling after fifty years of domination by Arabic as the language of education, trade and official correspondence. 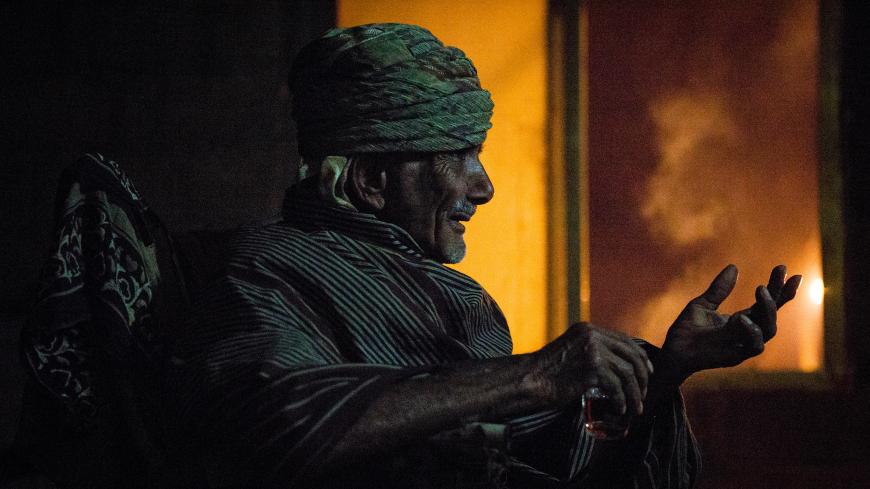 A portrait of Mabroot Al Mashali, a Jabali speaker who was an insurgent during Oman’s Dhofar Rebellion. - Sebastian Castelier

Language death is neither new nor rare — a language disappears every fortnight. Often, the loss of a language undermines a vivid local identity, its traditions and history, subsumed by a broader identity characterized by dominant languages.

In Oman, the Gulf Cooperation Council country with the greatest linguistic diversity, eight of the country’s 10 languages are threatened or dying, according to UNESCO’s Atlas of Endangered Languages. They range from Jabbali, a South Arabic language spoken in the country’s Dhofar mountain range, to Kumzari, a severely endangered Southwestern Iranian language spoken by 5,000 people.

Since July, Omani linguist Said Al Jahdhami, an assistant professor at Sultan Qaboos University, has stepped up his calls to the Omani authorities to save these eight languages from extinction. According to his research in 2015, the minority languages in Oman belong to three families: the Indo-Iranian Kumzari, Lawati (also known as Khojki), Zadjali and Balochi; the Modern South Arabian Harsusi, Bathari, Hobyot, Mehri and Jabbali; and the Bantu language Swahili. Only Balochi and Swahili have enough world speakers to be considered safe from extinction.

UNESCO estimates the speakers of Oman’s endangered languages to number about 138,000 to 144,000. However, the local authorities have yet to conduct an official census.

Some of the risks these languages face are due to the structural reforms — mainly in the field of education — instigated by Sultan Qaboos bin Said for the last five decades to promote national unity over a constellation of identities scattered across the state, with an emphasis on language. Ever since a coup orchestrated by British intelligence in July 1970 overthrew Sultan Qaboos’s father, Sultan Said bin Taimur, the state's official language, Arabic, has been a key element of this newly crafted Omani identity.

Houchang Hassan-Yari, head of the political science department at Sultan Qaboos University, said Oman has evolved in a complex geostrategic context. “It has no choice but to reinforce a common point around which everyone rallies. That is why nationalism is strong," he told Al-Monitor.

The Arabic language is a major part of this identity. Worldwide, it is the mother tongue of more than 290 million people and the liturgical language of around 1.5 billion Muslims, according to UNESCO.

Oman's efforts to increase literacy rates have further strengthened the use of Arabic as the language of education. Other mother tongues were not included in the curricula, even as secondary languages, in the regions where they were widely used. It hastened the decline of local languages, as their use became limited to the family and local community. As the number of public schools has grown steadily from one in 1951 to more than 1,100 in 2017, Al Jahdhami reports an "intense exposure to Arabic" among the youth and a shift toward the language.

“The sultanate perceived [the other languages] as a threat to national identity,” Al Jahdhami told Al-Monitor, claiming that some official sources and reports refer to them as "dialects" rather than languages to undermine their cultural importance.

But others think the languages are worth saving. In an email forwarded to Al-Monitor, an employee of the Ministry of Education laments the slow death of Omani languages and says that "some of them should be taught at school."

But this idea is not mainstream in the sultanate. On the contrary, the policy of Sultan Qaboos, the longest-serving monarch in the Arab world, is to strengthen the Arab language and protect it both locally and internationally. In April 2019, the State Council acknowledged the need for a law to promote, protect and empower the Arabic language and ensure its correct use in state and private institutions. At the same meeting, the chairman of the language committee, Rayya Salim Said al Mantheri, echoed the official line that Arabic is a symbol of national unity.

Across Oman's Dhofar mountain range, between 25,000 and 50,000 people who belong to different tribes and clans speak Jabbali (or Shehri), which literally means "the language of the mountain." However, although the youth are proud of having a language of their own, with its colorful vocabulary for nature and the mountains, their language proficiency is much lower than that of the older generations.

This is partly because the young generation, educated in Arabic, employs a mixture of Jabbali and Arabic. Furthermore, the internet and TV — whose content is predominantly if not exclusively in Arabic — are aggravating the loss of linguistic skills among young Omanis.

“I [regret] our youth no longer speak pure Jabbali. They mix Arabic words in it,” 85-year-old Ali Kshob Al Ahakli told Al-Monitor, pointing out that weak local identity can be a downside of political stability. “Oman has become one big pocket of national identity, with Arabic at its heart," he added.

Yet the old man believes that “many Omanis” would return to their tribal identities if the government falls — a reference to a rebellion that threatened Oman’s unity in the 1960s and 1970s as Dhofari separatists took up arms against Said bin Taimur to gain independence.

Seated next to him, his son Kanim expressed no regret for the loss. He has no idea what some of the words used by his father mean — particularly those that describe a traditional lifestyle that no longer exists. “I do not care if we speak Jabbali-Arabic," he told Al-Monitor.

To save ancestral traditions and reach out to Kanim’s tech-savvy generation, a Dhofar-born singer has chosen to broadcast his Jabbali music on YouTube. “It showcases my people’s identity and a culture that I inherited from my ancestors,” Said Al Mashani told Al-Monitor. 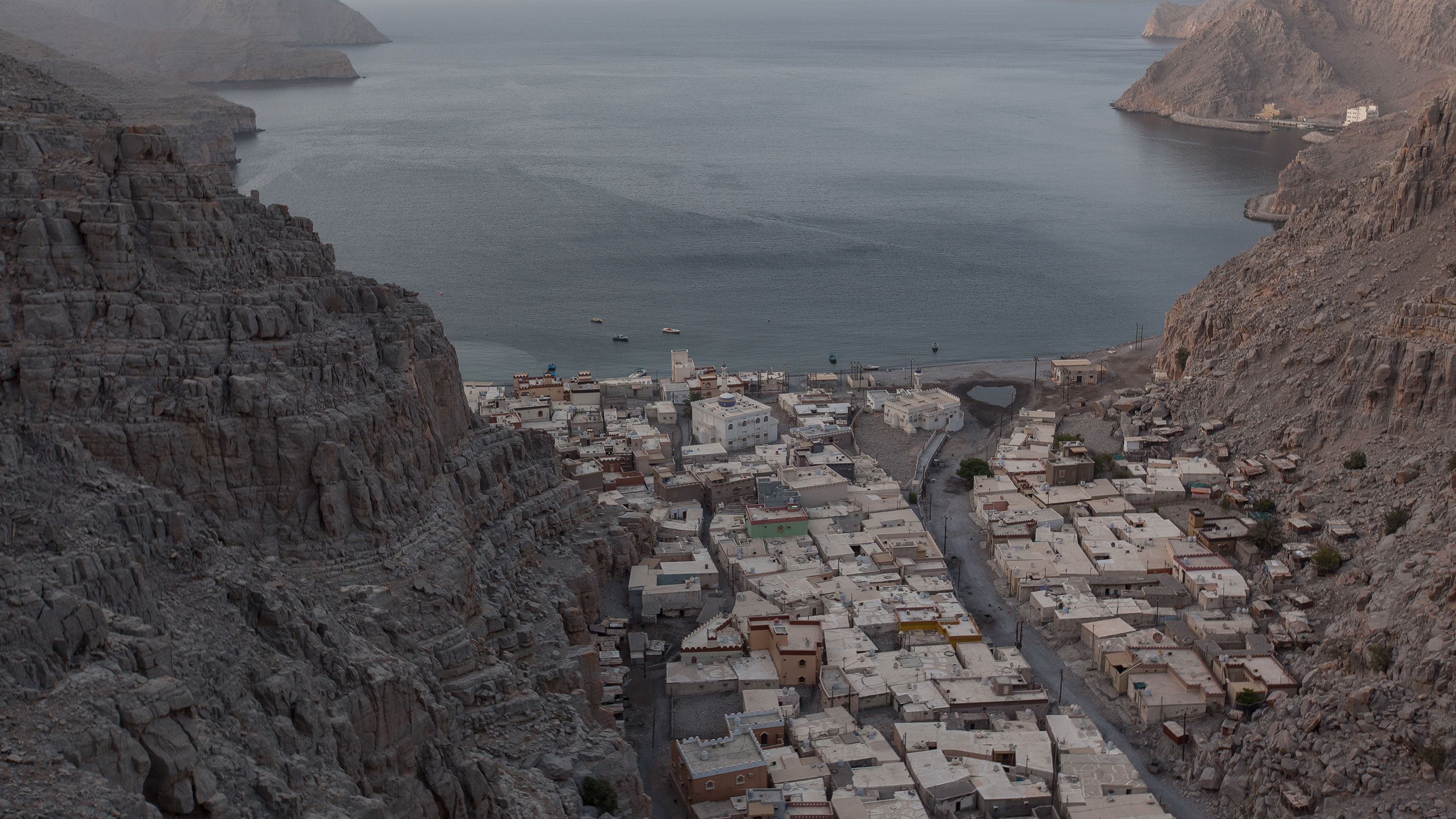 Kumzar, an isolated village nestled at the tip of the Omani peninsula of Musandam, overlooks the Strait of Hormuz. (Photo by Sebastian Castelier)

In the north, the tribal community in the village of Kumzar tries to hold on to its language, Kumzari. At 5,000 speakers, UNESCO considers Kumzari severely endangered. It is a Southwestern Iranian language that is heavily influenced by Arabic, Persian, Urdu, Hindi and English.

Although Kumzaris express pride in an identity forged over centuries by their ancestors, mandatory schooling, internet exposure and business transactions carried out in Arabic have already left the language dormant outside family circles. Many young people think learning it is a waste of time. Al Jahdhami says that the young generations simply ask, “What would I learn this for?” because outside of the home, Arabic is the predominant means of communication.

"Speakers can die out, but a language can also die through increasing influence from a more dominant one. This is what is happening in Oman,” Janet Watson, co-director of the Centre for Endangered Languages, Cultures and Ecosystems at the University of Leeds, told Al-Monitor over the phone.

According to information Watson provided to Al-Monitor, a project led by the Ministry of Heritage and Culture is researching the languages ​​spoken in the sultanate and another, by the Department of Culture at Oman’s Royal Court, is working on Oman's dead languages — ones that no longer have any speakers.

Said Al Jahdhami said that he was approached by Omani officials to document the sultanate’s languages. “I asked them if anything would be published, but they responded negatively. All they care about is to archive our languages,” the linguist said with regret. "Not much is done to save those that are still alive and preserve the rich linguistic diversity of Oman."

The Ministry of Heritage and Culture did not respond to Al-Monitor's requests for an interview.

Local and international academics are working to document those languages before their remains disappear entirely, mainly in Dhofar and in the mountainous peninsula of Musandam, which overlooks the Strait of Hormuz.

For Watson, hope for perpetuating linguistic diversity may lie in new technology. “People now record poetry in their local language and transmit them through smartphones. There are WhatsApp groups where the youth practice Mehri and discuss the meaning of some words!” she said.