Berber language heard but not seen in Siwa Oasis

The Siwi language, used by Berbers in the Siwa Oasis, is considered endangered by UNESCO, but political obstacles prevent efforts to document and promote it. 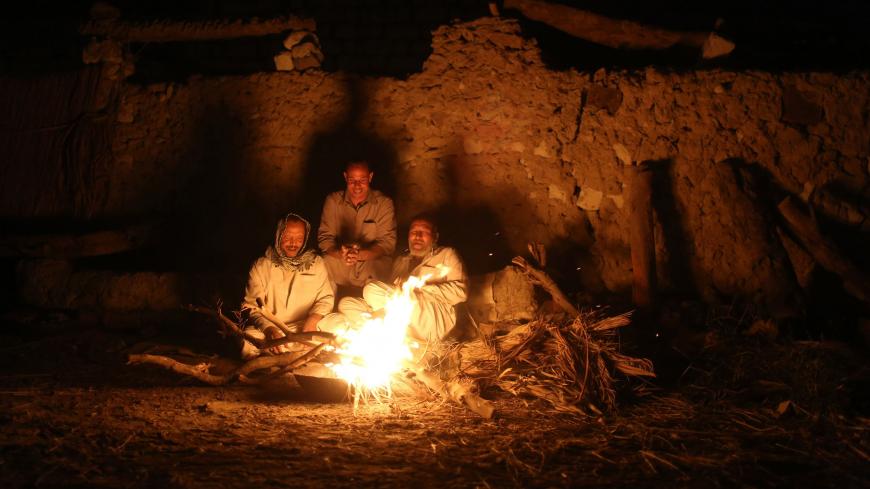 Men warm themselves by a fire outside their houses on a street in Siwa, Egypt, Nov. 24, 2014. - REUTERS/Asmaa Waguih

In the far northwest of Egypt, only 30 miles (59 kilometers) east of the Libyan border and some 350 miles (560 kilometers) from the Nile Valley, the Siwa Oasis is one of the most remote areas in the country.

An agricultural land famous for its dates and olives, the oasis is has become more recognized for its tourism potential in the last decade. It is the easternmost door to the land of the Berbers, an indigenous people of North Africa whose presence spreads from the Canary Islands to Siwa. Medieval Arabic geographers mention their presence in the oasis in their written accounts that date back to 12th century. At present, they number around 25,000.

For centuries, the Berber population of the oasis was concentrated in the walled towns of Aghurmi, Gara and Shali, but they started to move to the surrounding lands long time ago. Today,  the oasis is thinly populated even after being annexed to Egypt in 1819, partly because its first paved road connecting to another city, Marsa Matrouh, was not built until 1984.

Siwa's insular nature has played a major role in allowing local Berbers to preserve their culture, one of the main expressions of which is their language, Siwi. Known under the generic name of Tamazight — the Berber word for Berber — the language is thought to be spoken by 10,000 to 15,000 people, though there has been no official census.

“Siwa is really isolated, and that is why the language has been sustained,” said a local man who lives in Siwa and attended some events of the World Amazigh Congress, a non-governmental group that protects and promotes the Berber identity. He asked his name not to be used — like some others interviewed by Al-Monitor — explaining that the language issue is sensitive and may cause trouble with the Egyptian authorities.

“If Siwa had been next to Cairo, the language would have already disappeared long ago. … Siwa has had little influence from the outside, and that has been positive,” he told Al-Monitor.

The language, locally known as Siwi, belongs to the Berber subgroup the Afro-Asiatic language family. The Berber language spoken in the nearby Libyan oasis of Awjila is geographically closest, but Siwi is most similar to the language that used to be spoken in central Libya and in the Nafusa mountains in the west of the country.

This contact between the two languages has influenced Siwi over the centuries — mainly in terms of vocabulary. “We have to distinguish between different layers of Arabic influence,” Lameen Souag, a linguist at the French National Center for Scientific Research, explained to Al-Monitor. “There are some very old loanwords; then there are a bunch of quite well integrated loanwords and grammatical structures, which seems to date back before 1800.”

He said that there are also a bunch of loanwords from modern Egyptian Arabic, as a result of contact with the rest of Egypt through education, media or migration.

This contact between Siwa and the rest of Egypt has dramatically accelerated over the last few decades due to modern means of communication and transportation, which have increased immigration and tourism. This combination has become a catalyst for demographic and social change in the oasis, and some locals have started to fear for the local language.

Their fears are not unfounded. According to the UNESCO Atlas of the world’s languages in danger, Siwi’s vitality is considered “definitely endangered.” By contrast, Ethnologue, another organization that provides language information, considers its status “vigorous,” meaning that the language is not on the path to disappearance but is limited to face-to face communication. Others argue that the truth lies somewhere in between, given than the language is used by all ages in everyday communication but at the same time there are factors that put it in danger, such as the absence of research on the language, the fact that it is not at all taught in schools and no dictionary has been produced.

The Egyptian Constitution recognizes Arabic as the only official language in the country, yet it states that the state “shall pay special attention to protecting components of cultural pluralism in Egypt” and “make available all types of cultural materials … without discrimination based on … geographic location.” The charter encourages the state to “give special attention to remote areas” and promote “translation from and into Arabic.”

This part of the constitution was initially praised by some local Berbers, but the reality on the ground is far less encouraging. In Siwa, the education system follows the same model as the rest of Egypt and uses Arabic as its exclusive language. There is no cultural center in the oasis where it is possible to study Siwi, leaving homes the only way to learn it, which means that non-local Arabs, an increasing segment of its population, cannot learn it even they want to.

“The father and the mother [of a family] speak the same language, and therefore everyone speaks Siwi at home. This is how the language is preserved,” Sheikh Omar of the Awlad Musa tribe told Al-Monitor. “Young people sometimes prepare small books and dictionaries with vocabulary but there are no official and strong [initiatives to document the language],” he added.

One of the most notable consequences of the absence of institutions dedicated to studying Siwi is that the language is not documented, something especially critical as Siwi has no written tradition. It does have an extensive tradition of poetry and folk tales, as well as riddles and proverbs, but as they are not written down, they risk being gradually lost.

Many in the oasis think that because Siwi is their mother tongue, there is no reason to study it. So they prefer to devote their time and energy to other languages, such as Arabic.

“Siwan people usually care about Arabic because it is the official language in Egypt and it gives them the opportunity to go to study in the university or to get into the military,” a Siwa resident who works in one of the few cultural institutions of the oasis told Al-Monitor. He also asked his name not to be used.

Those who try to start small projects to document the language — publish a dictionary or a grammatical study — find no support. “The language needs a dictionary because it is being lost little by little and now it is a cocktail between Arabic and Amazigh,” said the Siwi local who has ties with the World Amazigh Congress. “Some time ago I tried to [put together] a dictionary, but it is not an easy task because it requires money and time and gradually I gave up,” he said.

The suspicion with which the central government sees the peripheral communities and other minorities in Egypt is another major obstacle. “Siwis feel that the subject is politically sensitive and probably something that they'd better steer clear of if they want to be in good terms with the government,” Souag said.

This situation has led to a paradoxical situation in which the only research conducted on Siwi is carried out by foreign academics, while locals tend to shy away from it and even avoid talking about it.

“It is possible for [foreign] universities to send students to research Siwi, and this might help us to keep it from extinction but [in Egypt] it is difficult [because] nobody cares, let alone encourages it,” said the local working in a cultural institution in the oasis.

For Souag, the Egyptian government could boost Siwi by using the language in schools and in local broadcasts as well as financing research on the language, but so far there are no steps in that direction. He added that if such measures are taken, the language could recover and be saved frome extinction.

But given Egypt's reluctance to take action, the local World Amazigh Congress has for now much less ambitious aspirations. Its head in Egypt, Amany Al-Weshahy, told Al-Monitor that the organization is drafting a project to teach Siwi in the House of Culture, a local cultural center in Siwa, but it needs receive logistical support and funding from the Ministry of Culture.