Oded Amit, who was born in Baghdad and eventually fled to Israel, has taken it upon himself to teach Israelis of Iraqi immigrants the language of their ancestors in order to preserve it. 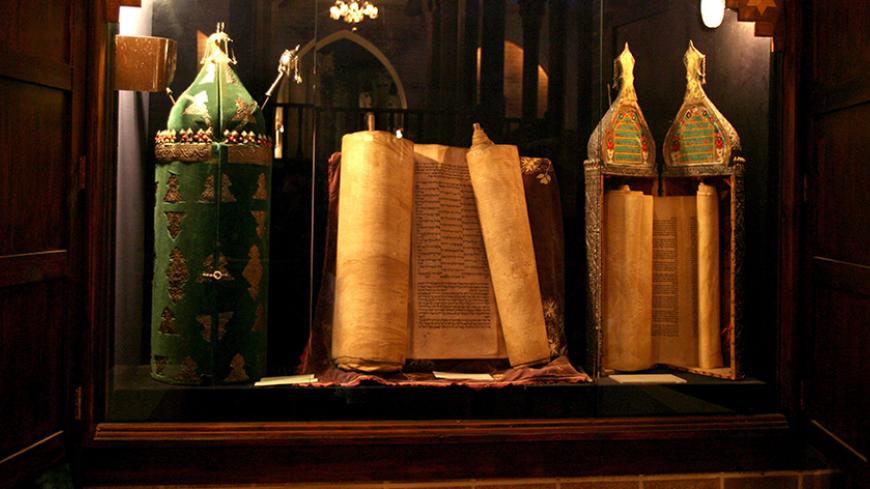 Torah scrolls are exhibited at the Babylonian Jewry Heritage Center in Or Yehuda, near Tel Aviv, Oct. 19, 2006. - REUTERS/Gil Cohen Magen

On Friday mornings in a class on the heritage of Babylonian Jewry, Oded Amit has taught a small group of Israelis to speak Jewish Iraqi, the language of his ancestors. Amit, 70, was born and raised in Baghdad, and Jewish Iraqi was the language in which his mother raised him.

“It’s a beautiful language, rich, full of wisdom and wit, but it is disappearing,” Amit told Al-Monitor. “What I’m doing is an attempt, perhaps desperate, to save something of it — to keep it alive a little longer. The younger generation doesn’t speak it anymore. They heard their aunt or grandma speaking it, but for them it’s not a mother tongue, it’s a curiosity.”

For hundreds of years, this dialect of Babylonian Jews flourished in their communities throughout Iraq. When most of them left in the early 1950s, Iraq lost the speakers of this unique language. The dialect is now spoken primarily in Israel and London, the two main centers of Babylonian Jewry. These days, there is no Jewish life per se in Baghdad. Only 12 Jews remain, so the community, more than 2,600 years old, is near its end. This is what motivated Amit, a retired engineer and a multitalented artist, to start his new career of teaching late in life.

Amit's course requires some basic knowledge, so all of those who register are sons and daughters of immigrants from Iraq. It consists of eight 90-minute sessions. After 12 hours, its graduates are able to chat fluently with grandma or can better understand what she is mumbling. Before Amit began teaching, he spent long hours extracting the rules of grammar from his mother’s language.

“I conjugated the verb ‘to write’ and derived the rules from that,” he said. “The problem is that there are many exceptions.” His work is important for historical documentation, because literature on the Babylonian dialect is relatively scant. It includes a dictionary published by Gila Yona and Rahamim Rajouan in 1995, a dictionary by Yitzhak Avishur published in 2008 and the updatable online collection of researcher Yehuda Katz from Herzliya. The Center for Babylonian Jewish Heritage has a collection of many items, including vocal and visual documentation of the language. It is clear to all that, within a decade at the most, the living language will no longer be heard.

Anyone familiar with the language of Iraqi Jews would agree that it is a warm and funny language in its sound, tones and its mix of sources. Like Yiddish, only Jews speak it, and its vocabulary reflects numerous external influences. Amit explained, “While it’s mostly based on Arabic, it has many expressions from Hebrew, Aramaic, Turkish and Persian and a little English and French.”

One of the well-known aspects of the dialect of Babylonian Jewry is its juicy curses. Yona and Rajouan included an appendix dedicated to curses in their dictionary. Especially entertaining are those that wish death by certain means on others. Someone you wish to see hanged is called “maqtua al-raqba,” that is, “decapitated neck.” For someone you wish would die in agony, you say, “Nfaqsit eino,” that is, “May his eye burst.” For wishing a simple death, there’s the moniker “zawaj a-almana,” meaning “the widow’s husband.” If the death wish applies to several people, you say “wahad thakal lakh,” meaning “that each would mourn the other.” Many curses are surprisingly also forms of praise. For instance, the word “naghl,” meaning “bastard,” is a curse that suggests spitting at a father’s crotch, since thanks to it, the child came into the world. It is usually meant as an expression of admiration.

Amit has an interesting explanation for the reason for the insults. He said, “If you compliment someone, it’s like you attracted the evil eye to him. When you curse him, you drive away the evil eye. Many curses are directed at parents, since they are responsible for the child’s education.”

The third of four children, Amit was born Adel Mualem to Eliyahu Menashe Mualem and his wife, Violet, nee Bekhor. “I grew up in the Bathawin neighborhood,” he recalled. With a smile, he added, “Al-Rawsaf Street 7/14/1.”

In the early 1950s, most of the Jewish community left Iraq for Israel, but his family stayed behind, along with another 3,000 Jews who chose to cling to their native land. They later left as well, gradually. The rise of the Baath Party in 1963 and the 1967 Six-Day War brought dark days to the Jews. They were forbidden to study at the university. Their phone lines were disconnected, and they were not allowed to sell property or withdraw money from the bank. In 1969, the “10 martyrs” — Jews who allegedly spied for Israel — were hanged, along with four non-Jews, and dozens of others were arrested and tortured.

“We lived a life of humiliation and fear there, and that’s why we looked to the West,” Amit said. “Our cultural heroes were Charles Aznavour and the Beatles. At home, we listened to Elvis Presley and Cliff Richard.” Together with four Jewish friends, Amit formed a band, Capri, which played Western music.

“In 1967, following the Six-Day War, came the end of the community,” he said. “I finished my studies in construction engineering in 1968, and no one would hire me.”

In December 1970, Amit fled with his sister Nadia to Iran, and from there, to Israel. The rest of the family followed them. Amit settled in Tel Aviv and found work with the Israeli Standards Institution. He eventually earned a master's degree in engineering, but the artistic bug stayed with him.

Amit, a construction engineer and teacher, is also an actor, a musician and a comic. He has his own show, “Oded Amit and Friends,” in which he tells stories and sings. Sometimes, he said, he misses the days of his youth, the Tigris and his friends at Al-Hikmah University, but he will not return. “I’m a total Israeli,” he said. “I even changed my name to a Hebrew name.”

I mentioned to him that his native language is Arabic, his roots are on the banks of the Tigris and he is even an authority in the study of Arabic. Does he — by these measures — not consider himself an Arab?

“For a certain time, I believed I was an Arab Jew, like there’s an Arab Christian,” he responded. “I really love Arabs, and like to speak with them, but I’m not an Arab. Maybe if Arabs would treat me like an equal, I would feel like one.”

In another decade, maybe less, few will walk among us who speak the dialect of Babylonian Jewry. Amit does not delude himself into thinking that his teaching will halt progress toward its disappearance, but he hopes that even when it is gone, the dialect will leave as many marks as possible in the memories of the community’s descendants.

“I feel that I received a cultural inheritance, and my duty is to pass it on to the next generation,” he said. “I ask that this language be given a corner, perhaps in a museum. I’m the last Mohican, and I’m ready to fight for it.”