While many Turks applaud the appointment of an imam inside the Hagia Sophia, others worry President Recep Tayyip Erdogan is claiming the national and historical treasure to build his case for an imperial presidency. 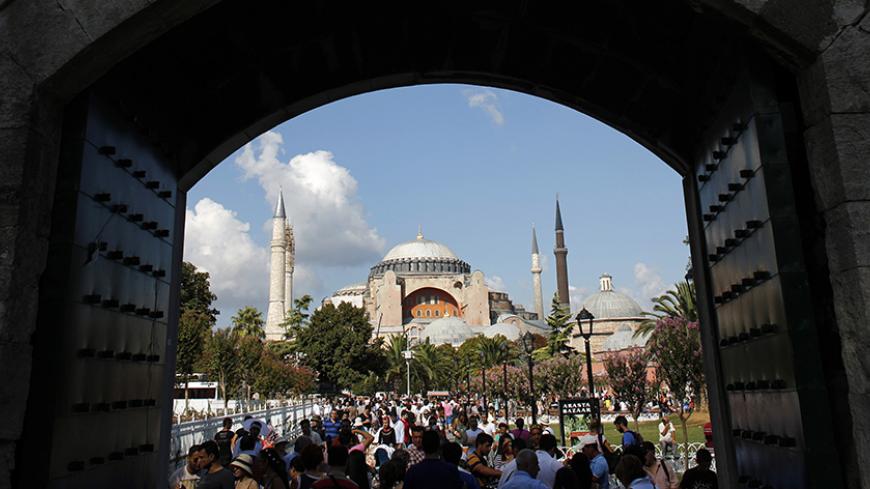 Onder Soy, the new imam of the Hunkar Kasri, part of the Hagia Sophia complex, recently led the first Friday prayers there in 80 years, sparking enormous joy and excitement among many Muslims. It also spawned concern among people who worry about potential loss of tourism revenue and frustration among those who fear this could be the first step toward completely converting the site into a mosque.

The situation is complicated.

First, the Hagia Sophia Museum — which encompasses the former Byzantine and Ottoman house of worship — has not become a functioning mosque. The imam, appointed Oct. 20 by the Turkish Religious Affairs Directorate, will oversee only the Hunkar Kasri, itself a tourist attraction with its impressive Iznik tiles. The Hunkar Kasri, which means "mini palace for the sultans," was a place for the Ottoman sultans to rest before and after they attended prayers at the Hagia Sophia.

Since 1991, the Hunkar Kasri has been open to prayer but had no official imam. It is a small area where observant Muslims can perform their midday and afternoon prayers. Now, with its own permanent imam, it is able to serve the public full time. Hence, believers can attend prayers five times a day, and also the special Friday prayers.

However, several believers who were interviewed on television Oct. 21 after the first Friday prayers at the complex said this access was not enough. One commented, “We are calling upon the president: Please open the Hagia Sophia as a mosque again so we can pray freely.” Below are a few examples from hundreds of jubilant comments on social media.

Political commentator Savci Sayan, who is known for his adoration of President Recep Tayyip Erdogan, tweeted, “I am dreaming of the president leading the Friday prayer at Hagia Sophia. And I am praying for this dream to come true. #LetUsPray.”

Another citizen tweeted, "Now there is an imam for the Hunkar Kasri of Hagia Sophia. The next order of business should be to open Hagia Sophia for believers."

The hashtag #AyasofyaAcilsinDunyaCildirsin ("Open Hagia Sophia and let the world be green with envy") also started trending as several tweets claimed that Istanbul cannot be free as long as Hagia Sophia remains a museum.

Several people who support Erdogan's Justice and Development Party (AKP) encouraged the idea as well, suggesting, “We do not want to enter Hagia Sophia by paying [for a ticket], but by having performed an ablution."

Turkish media outlets showed a great deal of interest in the new imam. He became a celebrity overnight as details about him spread, including his interest in kickboxing and karate and his love of music. Islamist news outlets did not hesitate to lead their newscasts with a photo of the imam wearing boxing gloves. Dini Haberler's caption read, “Against the Christian Crusaders, we now have a boxing imam.”

Al-Monitor reported in June that Islamist groups in Turkey have intensified their efforts around the Hagia Sophia. Today, the urging to open it as a mosque and for Erdogan to lead Friday prayers there has reached fever pitch. For proponents of the change, the Hagia Sophia as a museum symbolizes Turkey in chains; for independence to be complete, it must become a functioning mosque. A group called "Free Hagia Sophia" tweeted after the July 15 coup attempt, quoting a prominent religious scholar, “If we turn Hagia Sophia back into a mosque, all Turkey's hard times and troubles will end.”

However, there were a few lonely critical voices that dared to comment against the permanent imam's appointment.

One Twitter user wrote, “So Hagia Sophia now has an imam assigned by the Religious Affairs Directorate. It is only inside our homes where you have not yet nominated an imam.” Some people want to know, now that the Hagia Sophia Museum has an imam, whether the site has a religious status, which could affect its status as an international monument.

As Turkey is suffering from a significant loss in tourism, this news worries some businesses in the area. Al-Monitor spoke to the owners of 11 prominent businesses in Istanbul's Egyptian Market (also known as the Spice Bazaar), and all expressed concern about how the news will be reported in the international media. One of them said, “Please make sure you highlight that Hagia Sophia is still a museum. Visitors can still tour it. We are all Muslims, but let’s be honest, Istanbul does not need more mosques. We need more tourists.” Indeed, the vendors’ concerns are shared by the Turkish Ministry of Culture and Tourism, which reported a 32% decrease in the number of tourists from January to August 2016 compared with the same period in 2015. Not only have the number of visitors decreased, the average amount of money each spends in Turkey has gone down significantly.

So given the depressing figures, why would Erdogan risk further financial loss? A seasoned political science professor from a prominent Turkish university who spoke to Al-Monitor on condition of anonymity said, “Erdogan’s recent rhetoric on Lausanne and other international treaties designating the Turkish Republic’s borders [in which he] challenges the agreements from their foundations."

As he prepares for another possible election or referendum, said the professor, "We see that Erdogan is after an imperial presidency. And what better place to finalize this than a prayer session at the Hagia Sophia and converting it back to a mosque? This will be just like how the sultans' inaugurations were done — and all Turkish soap opera audiences know that."

The jubilation over possibly making the Hagia Sophia back into a mosque is not only a religious but also a nationalistic matter for Turks. That is precisely why, when Greek Defense Minister Panos Kammenos canceled his planned visit to Istanbul, the Turkish media reported it as a victory.

Twitter users posted pictures of the building with captions such as “Now the sound of call to prayer at the Hagia Sophia rises. This decision made the European devils mad.” Others expressed their joy that the call to the prayer reached all the way to Greece, leading Kammenos to cancel his trip.

In the Greek media, though, the reporting is a bit different. First, Kammenos’ purpose in traveling to Istanbul was to attend the Oct. 23 ceremony celebrating the 25-year anniversary of the enthronement of ecumenical Patriarch Bartholomew. The issue of the new imam was only one reason he canceled his trip. The Greek government is worried about Erdogan's revisionist approach, his criticism of the Lausanne Treaty and his recent claims on Greek islands and territory. Turkish violations of Greek sea and airspace is also a recurring source of tension between the two countries. Erdogan’s words and what some see as his intent to gradually convert the Hagia Sophia into a mosque despite several international and Greek complaints have exacerbated matters.

One retired Greek diplomat told Al-Monitor on condition of anonymity, “The Turkish Ministry of Foreign Affairs and office of the presidency say Hagia Sophia will remain a museum, whereas the unofficial pro-AKP voices are running the other direction. We fear with regard to Hagia Sophia, the government is fanning the flames only to say they had to obey the public’s wishes at the end.” Like other countries bordering Turkey, Greece is concerned about the volatility of Erdogan’s fury in both the domestic and international realms.

The last time Erdogan spoke about the Hagia Sophia becoming a mosque was before the presidential elections in June 2014. As another renovated mosque was opening in Istanbul, audiences asked about it, and Erdogan replied evasively, “Let’s first make sure other mosques in the vicinity are filled up during prayer times, particularly in the morning prayers.”

None of the commentators have argued that Erdogan’s desire has been fulfilled to turn the Hagia Sophia into a mosque today. But can Erdogan achieve his presidency without leading prayers there?