The Hagia Sophia's damaged 1,400-year-old imperial gate could be the first of many disasters in the world heritage site due to neglect. 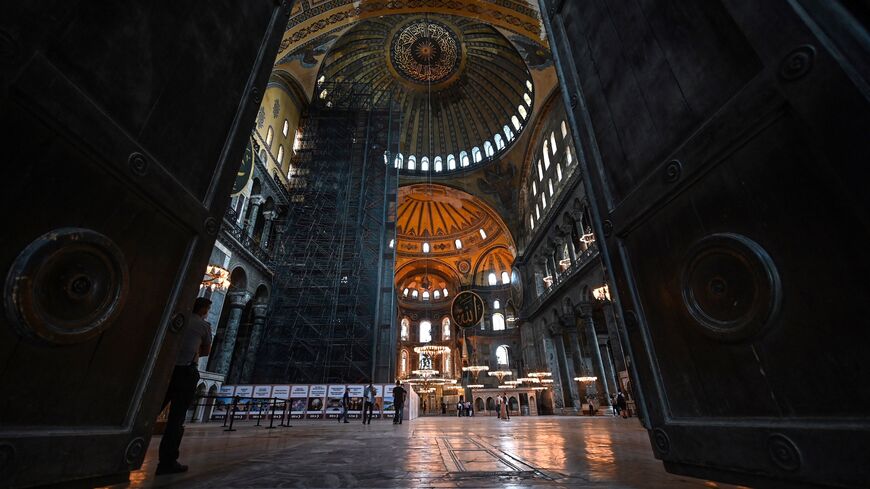 The Hagia Sophia's main nave is seen through the imperial gate on June 26, 2020, in Istanbul. - OZAN KOSE/AFP via Getty Images

One of Turkey's most significant historical artifacts, the Hagia Sophia, has been vandalized.

The plight of the Hagia Sophia, which was converted to a mosque in July 2020, is back in the news with reports that the 1,400-year-old imperial gate of the edifice was vandalized. In April, the Turkish Union of Art History posted photos of the damage. The image of the vandalized oak door, warn observers, means that the international community’s repeated urging that the iconic building be used as an “intercultural space” have fallen on deaf ears.

Serif Yasar, head of the Turkish Union of Art History, warned that the failure to protect the ancient door is a sign of danger to come. “The dome of the Hagia Sophia might collapse on the worshippers by 2050” if no precautions were taken.

Since July 2020, thousands have gathered at the iconic building five times a day for prayers. According to Arie Amaya-Akkermans, a writer and critic based in Istanbul, part of the problem is the transfer of the management of the edifice.

“The management of the building has changed hands from the Ministry of Culture to the Department of Religious Affairs … This is not to praise the Ministry of Culture and its leadership, but the difference is between having a professional department in charge of antiquities and not having it,” Akkermans told Al-Monitor. He said the current management has no real appreciation for the structural and environmental “risk factors that might compromise this enormous but so very fragile building.”

Tugba Tanyeri-Erdemir, a nonresident scholar at the Middle East Institute, told Al-Monitor, “The Hagia Sophia was converted from a museum into a functioning mosque in haste over the course of 14 days, without consulting experts who could have investigated, evaluated and developed a sustainable long-term site management plan. When the Hagia Sophia lost its status as a museum, the expertly trained museum staff who monitored the site daily for signs of decay were also removed. Now there are neither regulations to protect the site nor any experts to guide in that process.”

Akkermans stressed that there is a wider failure to protect Turkey’s cultural heritage and artifacts.

“A number of botched restorations of classical structures (towers, bridges, fragments of temples) have been executed in Turkey in recent years,” he said. “The point is that it [the Hagia Sophia] is being treated like any other mosque and not a precious heritage site.”

Nikolas Bakirtzis, an associate professor at The Cyprus Institute, told Al-Monitor, “The building’s significance for world civilization cannot be overstated and its preservation is an international priority. UNESCO includes the Hagia Sophia in its World Heritage list in recognition of its importance and global heritage value. Thus, the building’s architectural, artistic and overall historical integrity must be carefully protected and preserved. The least we can do for future generations is to protect this precious monument and make sure its cultural value remains intact for posterity.”

In 2021, UNESCO requested a report documenting the condition of the edifice. “Turkey rebuked the request and called UNESCO's criticism biased and political. UNESCO said in July 2021 that it might strip the Hagia Sophia of world heritage status,” Akkermans explained.

After the damage to the imperial gate was made public, Greek Prime Minister Kyriakos Mitsotakis called on UNESCO to up the pressure on Turkey, expressing “sadness and disgust” over the vandalism.

Meanwhile, experts warn that vandalism is only one of the risks facing the world heritage site.

“The heavy and unregulated human traffic at Hagia Sophia puts art and artifacts at the site at elevated risk every day. Even increased humidity caused by intensified traffic can affect fragile artworks such as mosaics. Any artifact that is physically accessible to visitors is in peril of vandalism,” Tanyeri-Erdemir concluded.