Turkey's Justice and Development Party is preaching belt-tightening to a suffering public, but will party leaders' often profligate spending cancel out the economic — and political — message? 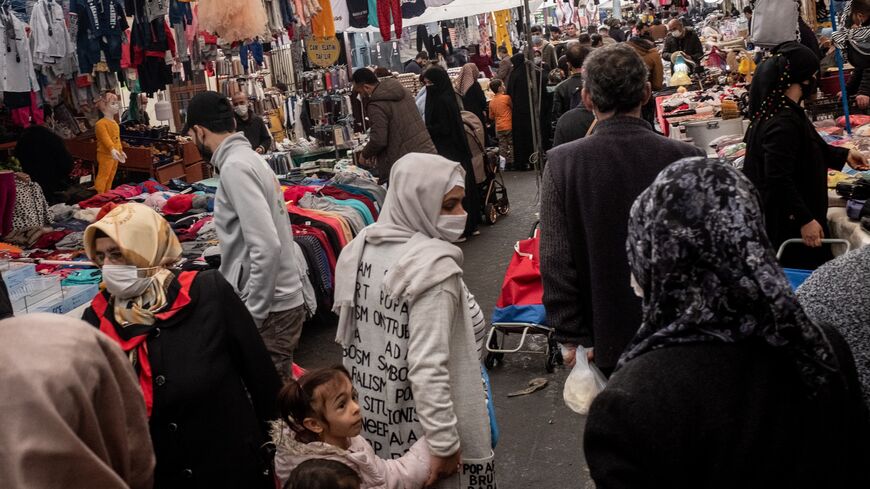 On June 30, the Turkish Official Gazette published a decree asking all government agencies to start a rigorous saving campaign. The detailed program even asked offices to curb their newspaper subscriptions. Two agencies were exempted from this spending control plan: the Directorate of Presidential Administrative Affairs and parliament’s General Presidency. The public saw this as the palace exemption.

The same day, first lady Emine Erdogan attended a campaign organized by the Agriculture and Forestry Ministry titled “Protect your food, own your kitchen,” focusing on global food scarcity. After providing chilling data about food waste, the first lady said there are things the public can do and provided a list of suggestions such as to make a list before going shopping to eliminate unnecessary purchases, and to serve smaller portions.

Social media then replied to her suggestions with photos of hunger, poverty and destitution along with lavish spending symbols of the presidential palace and  members of the ruling Justice and Development Party (AKP).

The first lady is also known for her expensive taste, and has made global headlines for her $50,000 Hermes brand purse.

Given the increasing hunger, poverty and diminishing purchasing power of Turkish citizens, “Make your portions smaller” was perceived as an insult rather than a practical suggestion. The increasing rates of hunger and the lavish spending of AKP elites made her suggestions offensive to the public.

World Bank data show that in 2020, over 10 million people in Turkey were under the poverty line. Opposition parties' research published at the end of 2020 reported 30 million people below the poverty line, with about half of them facing hunger on a daily basis in the country of 85 million. Unemployment, coupled with the weakening Turkish lira, volatile inflation rates and routinely rising prices of basic goods have contributed to increasing economic insecurity.

It is not just the palace that enjoys a lavish lifestyle. Thanks to Sedat Peker, Turkey’s well-known mafia boss in exile, AKP elites — not just politicians but also journalists — in various ranks and professions have made the news for their love of champagne, prepaid fancy holidays and jet society lifestyle choices.

Turkey is facing a dilemma. While government officials including the Religious Affairs Directorate Diyanet’s weekly sermons, preach public frugality and gratitude, news about their extravagant spending spreads routinely. These spending sprees are reported to sometimes include alcohol, paid sex and drugs.

AKP elites, whether employed by the government or not, receive regular "freebies “and collect multiple salaries from other agencies under the rubric "comfort payment.” While regular government employees’ salaries plummet against the dollar, AKP figures are nominated to multiple advisory boards with lush salaries.

While all this is out in the open, why would government figures continue making routine public statements about "frugality" and "Islamic virtues of gratitude"?

Al-Monitor spoke with several scholars, researchers, pollsters as well as journalists to explain this dilemma. They all emphasized a correlation between three variables — the AKP’s vote share, the deteriorating health of the economy and the concomitant intensification of frugality speeches.

The frugality advice is expected to generate an uproar from the opposition. From time to time all authoritarian regimes allow criticism. This is a rather safe issue for the government to allow opposition to blow off steam. Gokhan Ozbek, an independent journalist and producer of 23 Derece independent news center, told Al-Monitor, “There are two mindsets here. One is the mechanisms of the regular state and residents for whom the rules apply. The other is the status of presidency, which is like a legendary figure that cannot be questioned and be held accountable to the rules. This second understanding also means Erdogan is immune from all the spending restrictions on government employees.”

Political scientist Burak Ozpek told Al-Monitor that AKP governments since coming to power after the turn of the century have managed lower- and upper-income voters masterfully. However, he said the current economic problems compel the AKP to essentially pick between these two groups, and the AKP has chosen to back its elites. “All that is left for the poor is the Hagia Sophia and Taksim Mosque and Islamic symbols, plus plenty of advice,” Ozpek said.

Seren Selvin Korkmaz, a political analyst and the executive director of IstanPol Institute, told Al-Monitor that the frugality and gratitude advice no longer work. “The day-to-day economic problems are too serious for people who cannot buy food to consider savings.” Hence, this rhetoric gives the public an opportunity to vent.

The AKP also hopes to tap into conservative voters’ resilience and hope. This helps them to make do with less, to be grateful for what they have and to hope for better days. Considering that 95% of the media outlets report pro-government news and commentary, it could be that the AKP’s repeated frugality rhetoric may influence some of these voters.

Ayse Cavdar, an anthropologist and a journalist, told Al-Monitor, “With the pandemic Turkey has been facing one nightmare after another. The government has two paths to choose from: to accept its incompetency and quit or continue. The scandals that have erupted in the last couple of months are likely to diminish public confidence drastically. But for the government … there is one way to combat the crisis, to act as if all is well. Let’s pretend everything is normal. Like no one is dying from hunger or poverty or suffering from unemployment. This pretending as if all is well also creates internal problems. How can we expect an administration that has lost control of all means of governance to be able to control their rhetoric?”

Kemal Ozkiraz, director of the Eurasia Public Opinion Research Center, told Al-Monitor the tacit agreement between the AKP and its base is no longer valid. This agreement was based on saying, “'Yes, they are corrupt, but they work. They take care of my needs.' Now even those asking for basic needs are criminalized. The AKP has started to face losses from its core supporters due to high inflation and price hikes. These people’s income is now way below the inflation rate. Their understanding of the economy is based on the prices in the grocery store. [Mafia boss] Sedat Peker’s allegations accelerate AKP losses because he strengthens the perception that 'we suffer while they [AKP elites] are living in luxury.'”

He said the AKP, even though it is doing all right in the polls now, "will first lose 15% from their core supporter base because their living conditions can no longer be sustained. Then others are likely to follow this group in a domino effect. Erdogan needs a huge sum of money to reverse this trend.”

All that Erdogan and Diyanet can do is to preach frugality and try to enforce rules to curb spending for everyone, except for themselves.