An ultranationalist mafia boss, Sedat Peker, who had connections with the ruling elite for decades, now wages war against top officials with his camera and tripod from abroad. 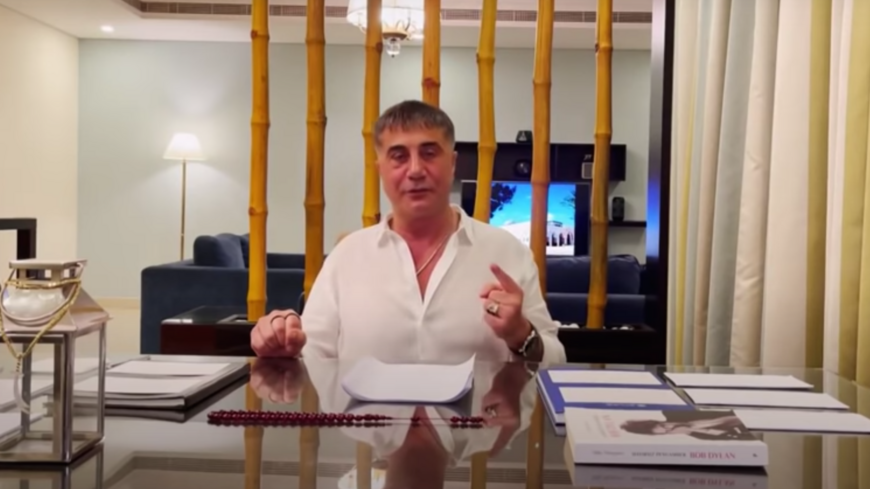 In the turbulent 1990s, corruption involving an intricate network of top government officials and underworld figures — labeled the “deep state” — became synonymous with Turkey’s name and image globally. But after the turn of the century, Recep Tayyip Erdogan, promising to curtail corruption, rose to power — first as prime minister, later as president.

In the last couple of years, mafia figures — many with ultranationalist backgrounds — have made a gradual return to public view on various platforms. One is Alaattin Cakici, who was released from prison last year as part of a parole eligibility bill that aimed to curb the spread of the novel coronavirus in penitentiaries. Shortly after his release, Cakici issued a public letter threatening Turkey’s main opposition leader.

The most recent is Sedat Peker, who gained national fame in 2016 when he threatened to “bathe in the blood” of so-called peace academics — those who had signed the Academics for Peace Initiative — declaring them terrorists. After a criminal case was brought against him in the matter, Peker was acquitted. He even went on to receive business awards from various institutions, including “most charitable businessman” from Milliyet Daily in 2017.

Much remains unknown about his actual business activity. Ryan Gingeras, a professor of national security affairs at the Naval Postgraduate School in Monterey, California, told Al-Monitor, “Peker has made the headlines for his activities in the last decade but we really do not know what he really does, what are his businesses or who he is for that matter.”

Since May 1, Turkey has been rocked by the exiled mafia boss’s YouTube videos, in which he described alleged incidents involving crime, corruption and state secrets. Peker, 49, has been at the intersection of media, politics and Islamist networks for over a decade now. Peker has posted five videos, each about an hour long. His popularity has skyrocketed at an increasing rate with each release. The fourth video surpassed 5 million views in five days. Peker has promised more videos as comments under his posts reveal a well-engaged audience asking detailed questions about several issues.

Peker is not just any businessman, as he has been organizing political rallies in various cities since 2015. He features in photos and videos with celebrities, as well as political figures, including Erdogan, and was a regular face at high society events in Turkey this century.

Peker, who has been convicted twice on organized crime charges, left Turkey in 2019. He said he had not fled but rather was just trying to complete his college degree. After traveling to several countries in the Balkans, he is now reportedly in Dubai in the United Arab Emirates, recording videos asking government elites why he has been discarded. The common theme in Peker’s videos are claims that top Justice and Development Party (AKP) officials betrayed him. He alleges that Interior Minister Suleyman Soylu tipped him off that an investigation report was being prepared on him before he left the country. Peker also claims he had left Turkey expecting to be “invited back.”

In his videos, Peker has made several allegations against AKP elites, including Soylu and other lawmakers. While many of these allegations have been long suspected, Peker's on-the-record accusations have rekindled the public’s interest. The allegations involve possible murder, rape, drug smuggling and abuse of political power — just to name a few. These allegations involve former senior bureaucrats such as Mehmet Agar and his son Tolga Agar, who is an AKP lawmaker, as well as Soylu and his advisers. Peker alleged that the younger Agar was involved in the rape and death of a young female journalist whose demise was originally reported as a suicide. Other allegations involve the lavish spending habits of Soylu’s advisers.

In addition, Peker has repeatedly mentioned he had security details assigned by the government, even during his trips abroad. He has shown official documents from Istanbul Provincial Protection Detail Committee to back his claims. Opposition lawmakers added to these allegations this week, saying the Interior Ministry had given Peker jammers so his phone conversations could not be picked up by security and intelligence officers.

Opposition leaders publicly questioned whether prosecutors will be opening an investigation into these allegations. Although Peker has not revealed any relationships with opposition figures, Soylu had commented on Peker’s videos and claimed Peker was getting support from opposition leaders. Another AKP lawmaker suggested that Soylu must be protected and that opening an investigation on the basis of a corrupt man’s words would expand his sphere of influence.

It is intriguing that Peker’s YouTube channel has not been banned in Turkey and that top AKP figures, including presidential spokesman Ibrahim Kalin, have acknowledged the videos while condemning opposition figures for taking Peker seriously. On March 18, Soylu finally asked prosecutors to investigate Peker’s claims. Baris Terkoglu, a prominent journalist who has been investigating organized crime networks of Turkey for decades, interpreted this call as the “de facto resignation of Soylu.”

Whether Peker’s allegations are worthy of an investigation or all bogus, there is one fact that cannot be denied: His videos are watched by millions. Even the items Peker has on his desk in the background — from books to photos and small knickknacks — generate a wide array of interpretations and commentary.

Why did Peker and his ilk grasp the attention of the public? How did an unsavory criminal become so fascinating and visible to Turkish audiences?

Part of the answer can be found in the contemporary popular culture. The country's neo-Ottoman dreams were primed by long-lasting television series such as "Valley of the Wolves," which had been influenced by real organized crime figures. Peker acknowledges in his videos that some of the characters on these series were based on him. The target audiences for such series are ultranationalist and Islamist men in Turkey. And they take these fictional characters to heart — with some even organizing a funeral for one of the characters in "Valley of the Wolves." Now Peker’s YouTube videos reflect how difficult it has become to separate real criminals from fictional ones.

One more explanation is embedded in the identity of Peker, a flashy figure who has spoken up against police disrespect toward his young daughter and his wife, who remain in Turkey. While people watch the videos they observe someone trying to portray himself almost as a patriotic Robin Hood, whose various services to his country have all been discarded ungratefully. Yet this comes at the same time he is boasting of mob activities and “breaking bones” of a lawmaker for insulting Erdogan.

Many viewers do not know the full extent of Peker’s mob activities or what they entail. As Gingeras highlighted, Peker has been more of a celebrity figure and his alleged illicit dealings do not directly impinge on the public. When he speaks, with books such as Mario Puzo's mafia novels "The Godfather" and "Omerta" on his desk, he is trying to promote an image of standing up to unfair treatment to protect his own family.

However, unlike other mafia figures, Peker is not ignorant of the state and may not not be engaged in a real battle against it as he claims he has served the state and yearns to get back to providing his services to it. He tenaciously utilizes images and words of ultranationalists, Islamists and even some well-known leftists to capture a large audience.

One more factor is that Peker fascinates the Turkish public as he lashes out at the most prominent men who appear to be impervious to threat. Peker’s image in the public eye has been as a member of the ruling elite. So now his words as an insider carry a high value as transparency of government activities has diminished significantly.

The AKP elites he targets feel obliged to engage him; this is to Peker's benefit. His words make the political elites who were allegedly in direct contact with him for years squirm. Where free speech is outlawed, only the outlaws can speak freely. Intriguingly, not only has access to his videos not been blocked, but so far no one has been taken into custody for speaking about them. In an odd way, Peker’s videos have given a very tense public in Turkey an outlet to blow off steam.

Peker’s well-prepared and meticulously edited speeches are seen as genuine and informative. A senior bureaucrat from the security establishment speaking on the condition of anonymity said, “Peker does not need to reveal all that he knows, all he needs to do is to signal what he knows. When mafia leaders become visible in public eye, it is time for crucial reshuffling among the top cadres. Erdogan will turn the tables to his own benefit with Peker’s words. I see that Peker is still serving the state."