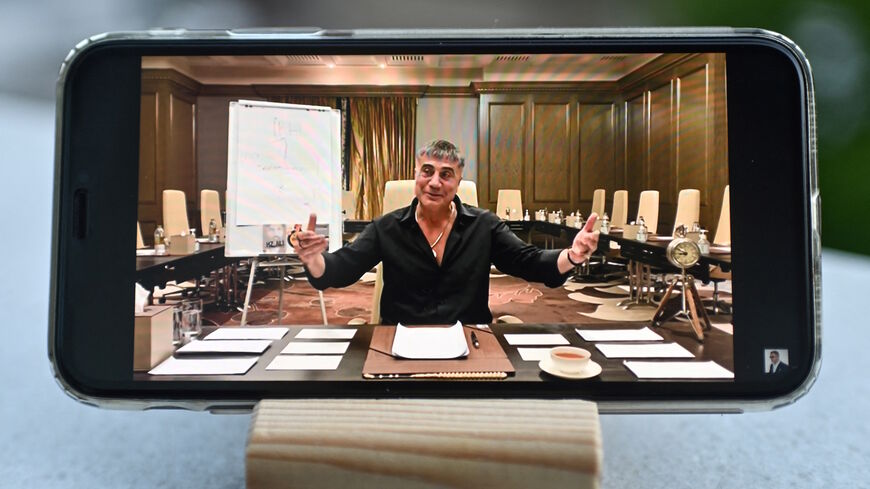 A photograph taken of a mobile phone in Istanbul on May 26, 2021, shows Sedat Peker speaking on his YouTube channel. - OZAN KOSE/AFP via Getty Images

ISTANBUL — The Ankara Chief Prosecutors Office issued an arrest warrant May 27 for exiled mafia boss Sedat Peker, who for more than three weeks has been posting hourlong videos online implicating Turkish officials in a multitude of crimes.

In a series of seven YouTube videos, which combined have more than 57 million views, Peker has been lobbing uncorroborated allegations ranging from corruption to rape and murder against high-level Turkish officials, shaking the inner circles of the nation’s ruling Justice and Development Party (AKP).

The arrest warrant comes a day after Turkish President Recep Tayyip Erdogan denounced the accusations and expressed support for Interior Minister Suleyman Soylu, a frequent target in the mobster’s videos.

"We stand with our interior minister in his battle with criminal gangs, as well as terrorist organizations," Erdogan told AKP lawmakers May 26, adding, “Turkey will thwart these plots and will bring organized crime bosses to Turkey to face justice."

Peker, who is believed to be in Dubai in the United Arab Emirates, threatened to “ruin" Soylu in an eighth video he promised to post May 30. The mobster said that while Soylu tipped him off to an investigation against him, prompting him to flee Turkey in 2019, he was forced to retaliate after his family was reportedly mistreated during a police raid on his Istanbul residence in April.

In response to the allegations, Soylu filed a criminal complaint against Peker last week and appeared on the national broadcaster Haberturk on May 25 in an attempt to clear his name of wrongdoing. Yet the ongoing scandal has laid bare rifts in the AKP that Erdogan sought to pave over in his speech May 26 through a message of unity against nefarious actors seeking to damage the nation as his party faces slumping poll ratings amid growing economic troubles.

Selim Koru, an analyst at the Economic Policy Research Foundation of Turkey, said recent developments have offered insights on power struggles in the AKP, where Soylu is one of few politicians with "standalone appeal," which makes him a serious contender as Erdogan’s successor. Noting Soylu’s charisma has at times wrought dilemmas for the AKP — which is centered around the president — Koru said the Peker scandal is showing the limits to Erdogan’s ability to respond to the mobster’s smear campaign.

“The Peker scandal could have been an opportunity to ditch Soylu, but it would have meant weakening the party and the government,” Koru told Al-Monitor. “It would also have brought momentum to the opposition, which is already surging due to the economic crisis.”

Koru said that while Soylu could eventually be forced to step down, Erdogan’s speech May 26 indicated that the Turkish leader would likely continue to defend party officials “at least on the rhetorical level” and deny Peker’s accusations of systematic corruption.

AKP lawmakers, along with nationalist members of parliament who make up the nation’s ruling coalition, voted down a parliamentary motion May 26 that called for an investigation into Peker’s allegations against top officials. Earlier in the day, Erdogan said the judiciary would investigate all allegations.

"No claim ... from the past will be left in the open, everything will be investigated by the judiciary, all the lies and accusations will be cleared," Erdogan said. "Nobody should doubt that Turkey is a democratic state of law."

Against this background, Sinem Adar, an associate at the Center for Applied Turkey Studies at the German Institute for International and Security Affairs, said a serious government investigation into Soylu’s alleged engagements in corruption is unlikely. But she emphasized the increasing frequency of scandals plaguing AKP officials, including opposition campaigns alleging the misuse of Central Bank reserves, and said Peker’s revelations could have lasting impacts on the party.

“At the end of the day, no matter what the outcome of this particular case is, I think it significantly harms first and foremost the president and second the AKP, as a political party,” Adar told Al-Monitor. “The decline of the president and the AKP, I think, is by now a fact that is very difficult to change."

Koru said that while investigations might be launched in the future, they “will not be genuine,” adding, “The government is too weak to afford self-criticism.”

“The revelations aren’t going to lead to significant shifts in voter sentiment,” Koru said. “The public doesn’t really care about corruption or collusion with organized crime, as long as the government delivers on its promises. Right now, it isn’t.”