Turkish Interior Minister Suleyman Soylu said he would not resign and defended his record against allegations by an exiled mafia boss whose wide-spanning YouTube confessions have gripped Turkish politics. 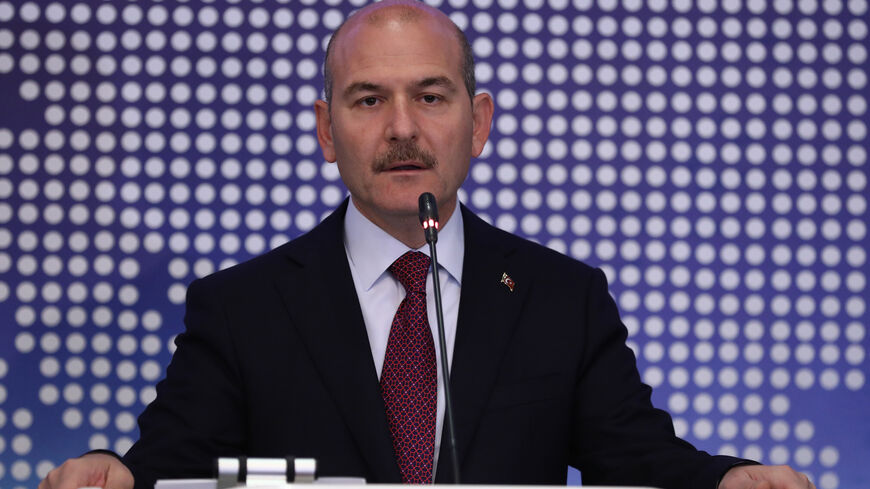 ISTANBUL — Top Turkish officials continue to grapple with a growing list of allegations made by an exiled mafia boss, whose ongoing series of YouTube revelations have rattled Turkish politics.

Since early May, Sedat Peker, a convicted organized crime leader believed to be in Dubai, has been posting hour-long videos implicating current and former high-level officials of crimes including drug trafficking, racketeering, rape and murder.

At the center of many accusations is Suleyman Soylu, Turkey’s interior minister since 2016. Faced with direct taunts from Peker, who claims to have long colluded with Soylu, the embattled minister appeared a second time in less than a week on national television late Monday to deny the claims and state he would not resign amid the controversy.

“There is an economic attack against Turkey,” Soylu told a panel of journalists on Haberturk Monday. “They want Turkey’s economy to shrink and lose its capability to maneuver. I am not the subject. Turkey is the subject of an operation.”

In the more than 2.5-hour-long interview, Soylu avoided directly answering most questions regarding the allegations lodged against him, instead choosing to appeal to his conservative-nationalist supporters by highlighting his record as a tough state official who supports the administration of Turkish President Recep Tayyip Erdogan.

Soylu singled out former Prime Minister Ahmet Davutoglu, current chair of the opposition Future Party, claiming he attempted to undermine Erdogan in an attempt to bolster his own credentials within Turkey’s ruling Justice and Development Party (AKP).

By holding up a series of laminated news clippings and infographics, Soylu contrasted his record against that of former state officials, including Korkut Eken and Mehmet Agar, who have come under increased scrutiny after accusations by Peker in his YouTube exposes.

The minister also claimed Peker was paying a Turkish politician $10,000 a month, but refused to name the official despite repeated questions on the subject by the panel.

“I don’t think he increased his credibility at all,” Berk Esen, an assistant professor of political science at Sabanci University, told Al-Monitor. “Peker’s allegations are still up in the air, waiting to be answered.”

The developments come amid rumors of increasing fractures in the AKP, which has seen its support slide in recent polls amid economic troubles and a perceived mismanagement of the COVID-19 pandemic. Observers often pit Soylu and his nationalist backers against a faction led by former finance minister and Erdogan son-in-law Berat Albayrak in a struggle to gain influence within the AKP ranks.

Few officials have so far defended Soylu in the face of Peker’s accusations, though Nationalist Movement Party chair Devlet Bahceli, a top Erdogan ally in Turkey’s governing coalition, has repeatedly vouched for Soylu in recent weeks.

“Turkey’s agenda cannot be taken hostage by video recordings and cannot be seized by social media slander,” Bahceli said Tuesday during a speech in which he called for legal action against Peker.

While speaking on Haberturk, Soylu denied any links between himself and Peker, naming one associate, Resat Hacifazlioglu, as unlikely to have had relations with the mob boss. In response, Peker posted a months-old video chat Tuesday showing him talking with Hacifazlioglu about troubles he was experiencing with Soylu and how they should go about fixing them.

The public battle is believed to have started as a result of an April 9 raid on the mobster’s Istanbul residence in which police officers reportedly pointed rifles at Peker’s wife and children. Having apparently taken the move personally, Peker has since published YouTube videos with a particular focus on Soylu, who he claims had tipped him off to an investigation in 2019, prompting Peker to leave the country.

Peker has also repeatedly said Soylu had promised him safe return to Turkey in April, another possible motivator for his online revelations.

Notably, Peker’s YouTube channel has yet to be blocked in Turkey, giving rise to rumors over who benefits from the ongoing exposes. To date, Peker has not implicated Erdogan, who he endearingly calls “Brother Tayyip,” convincing some analysts he is carefully choosing targets in an effort to secure his return to Turkey and possibly preserve his standing in some circles.

“The real question now is what Erdogan will do,” Esen told Al-Monitor. “I don’t think he can purge Soylu right away. He is still too powerful, so he is waiting for Soylu to weaken himself. At that moment, he might not purge him per se, but at least Soylu will lose his chances of having an autonomous political career, independent from Erdogan.”