Erdogan in hot spot as Turks question 'mafiazation' of politics

Erdogan risks a major political setback unless he manages to contain an unprecedented scandal sparked by a mobster claiming close links with government figures. 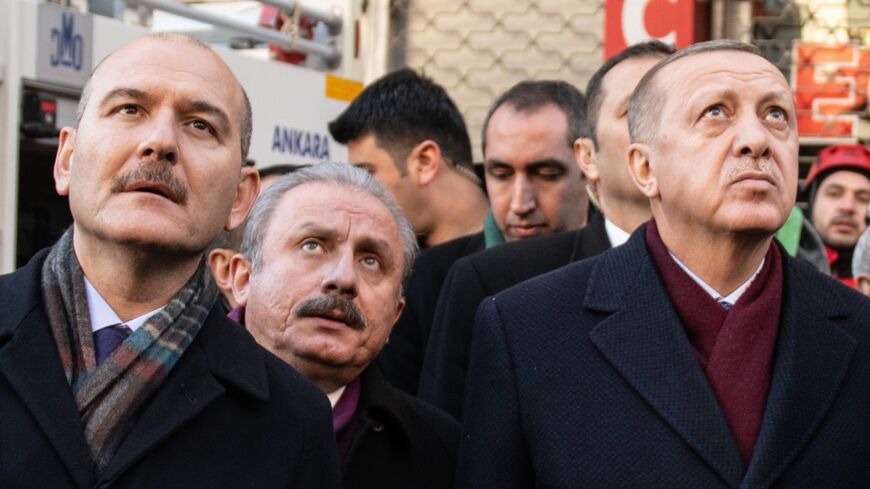 Interior Minister Suleyman Soylu (L), head of the Turkish parliament Mustafa Sentop (2L) and Turkish President Recep Tayyip Erdogan visitsthe site of an earthquake on Jan. 25, 2020 in Elazig, Turkey. Soylu is in the hot seat as a result of the video accusations of a Turkish mafia figure living in exile. - Burak Kara/Getty Images)

A Turkish mobster who until recently organized rallies in support of President Recep Tayyip Erdogan and enjoyed favor with pro-government circles has been rattling Turkey since early May, posting a series of videos to expose what he paints as close links between the high stratum of politics and the underworld, including accusations of drug dealing, racketeering and even murder against members or cronies of the ruling party.

Though the country is no stranger to state officials colluding with criminals, the scope and gravity of the claims has fueled concerns over Turkey’s transformation under Erdogan, who, opponents say, has been monopolizing the Turkish state since assuming sweeping executive powers in 2018.

Sedat Peker, a convicted criminal gang leader who, according to his own account, left Turkey in late 2019 after getting wind of a police probe against him, has explicitly targeted Interior Minister Suleyman Soylu, who had allegedly promised him protection but did not keep his word; hence, Peker’s quest for score-settling. Up to 6 million people have watched each of the six hourlong videos Peker has posted on YouTube from Dubai in the United Arab Emirates, prompting opposition calls for a parliamentary probe into his allegations.

Soylu and others in Peker’s crosshairs deny the accusations, but to many they are too trenchant to dismiss. The mobster has been providing details to back up his claims, including recordings of video calls with a pro-government journalist who, he says, was his go-between with Soylu. He has confessed also to his own role in publicly known incidents such as the battering of a former lawmaker and an attack on the offices of the daily Hurriyet, which he allegedly organized at the request of members of Erdogan’s Justice and Development Party (AKP).

Unfolding like a reality show that often feels surreal, the scandal has seen the mobster and the interior minister trade insults on social media before the eyes of millions eager to catch a glimpse of Ankara’s “dirty laundry.”

Peker’s claims come amid growing allegations of corruption in AKP ranks and are likely to echo well beyond Turkey’s borders as they involve claims about international drug trafficking, money laundering and murky business links.

If true, the picture that Peker paints goes beyond corruption as we know it and could be perhaps described as criminalization of the state apparatus. His allegations suggest that organized crime groups have been used in power struggles within the government as well as to spread political propaganda, run underground economies, manipulate the media and bully the opposition and civic society.

Whatever the details of the conflict that led Peker to speak up, two fundamental factors lie at the core of the matter.

The first is economic and has to do with the control of the country’s underground economy, which is said to have hugely expanded in recent years. The increase in illicit revenues stems not only from underground sectors such as prostitution, drug trafficking and fuel smuggling, but also influence peddling, including bribery in public tenders and kickbacks paid by foreign companies seeking to do business in Turkey.

A new addition to the flow of illicit money has come after the 2016 coup attempt. Ankara blamed the putsch on US-based preacher Fethullah Gulen and designated his large network of followers as a terrorist organization, known by the acronym FETO. As part of the crackdown, Gulenist-owned companies were seized and then sold off, mostly to AKP cronies. As it later turned out, many businesspeople accused of Gulenist links paid bulky bribes to escape investigation or trial in what has come to be known as “the FETO market.”

According to police sources quoted by the T24 news site, illicit money in Istanbul alone amounted to an estimated $10 billion in 2020, up from less than $3 billion in 2015.

The second reason is political. Since Turkey’s transition to an executive presidency system in 2018, the government’s powers have grown at the expense of accountability and transparency as it tightened control over the judiciary and the media, while the parliament lost its oversight functions. In a memorable response to opposition queries on government spending in November, Erdogan snapped that he “no longer [has] time to give accounts of such things.” This sense of impunity is often on display in the lower ranks of the AKP and its supporters as well. According to critics, the government is covering up countless deeds of misconduct and corruption, which could hardly be brought to light as long as it stays in power.

Thus, the argument goes, clinging to power has become a matter of life and death for the AKP. After his fallout with the Gulenists, Erdogan has aligned with the far-right Nationalist Movement Party, which, in turn, has emboldened criminal groups with nationalist leanings such as Peker’s.

There is a direct link between the scandals and the nationalist, security-centered narrative that Ankara has adopted since the botched coup, framing its supporters as patriots and all its opponents as enemies. In the climate fostered by this narrative, people who see themselves as loyal defenders of the state and vilify the opposition can easily climb up the ladders, regardless of their professional merits or moral integrity.

Peker’s broadsides at Soylu and other AKP figures might not have an immediate impact on Erdogan’s poll numbers, but they would inevitably tarnish the government’s credibility unless prosecutors and the AKP majority in parliament take action to investigate the claims. Erdogan has remained mum on the allegations against Soylu, which some see as a sign that he could ask the minister to resign. Soylu, a hawk on security matters, enjoys much popularity among government supporters and is reportedly locked in an in-house turf war with Erdogan’s son-in-law Berat Albayrak. Soylu had tweeted his resignation over a controversial coronavirus lockdown in April 2020, but Erdogan rejected his resignation.

With Peker promising more revelations, the government is facing a major test to show commitment to combating organized crime and corruption. A failure to contain the scandal could see it grow into the biggest political crisis that Erdogan has faced as executive president.