A spree of rattling allegations by a Turkish mobster has brought into focus the increase in cocaine trafficking in Turkey and its domestic and international ramifications. 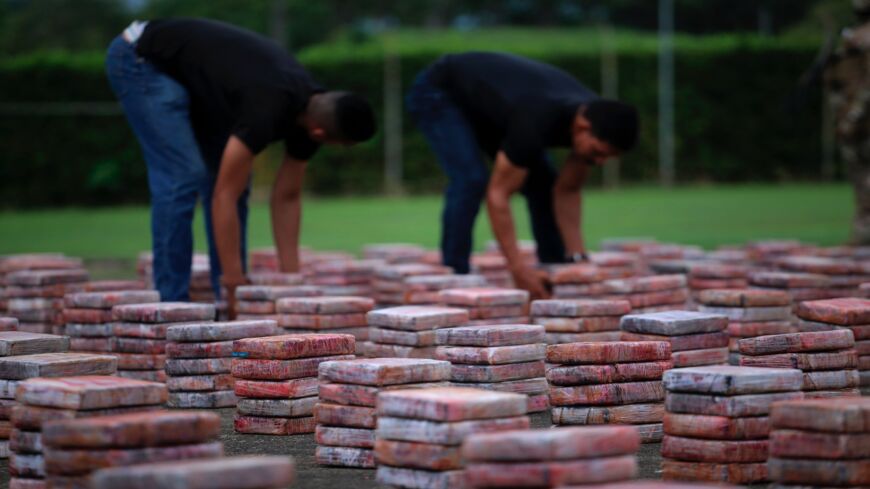 Members of the Panamanian National Aeronaval Service of Panama (SENAN) organize packages of seized drugs in Panama City on May 18, 2109. The SENAN seized 1.5 tons of cocaine inside a container that had Turkey as its final destination at the Cristobal container port in Colon. - MAURICIO VALENZUELA/AFP via Getty Images

Long a major route of heroin smuggling from Afghanistan to Europe, Turkey in recent years has seen an increase in cocaine trafficking as well, leading some to suggest that the country has become a cocaine distribution hub from Latin America to Europe and the Middle East. Yet the issue has only recently come into public focus following bombshell allegations by a Turkish mobster on the run.

In a series of viral videos from Dubai since early May, Sedat Peker, a convicted criminal gang leader, has flung accusations of malfeasance and corruption at members and cronies of the ruling Justice and Development Party (AKP), including claims that high-profile figures are involved in cocaine smuggling from Colombia.

A grave indication of Turkey’s growing prominence as a cocaine route came in June 2020 when Colombian officials announced the seizure of 4.9 tons of cocaine bound for Turkey in shipping containers at the Pacific port of Buenaventura.

Then, in early May, authorities at Panama’s PSA port seized 616 packages of cocaine hidden in a banana shipment from Ecuador, which was en route to Turkey’s Mediterranean port of Mersin. The Ecuadorian port of Puerto Bolivar, from where the container set off, is operated by Turkish company Yilport under a 50-year contract signed in February 2016 in the presence of President Recep Tayyip Erdogan and his Ecuadorian counterpart. The company denied any responsibility for the illicit cargo, saying that narcotics seizures at the port had increased nine times since it took over.

In another striking incident, 540 kilograms (1,190 pounds) of cocaine were seized at the Yilport port in Dilovasi, near Istanbul, on a ship from Brazil in August 2020. The seizure was portrayed as an example of how successful Turkey is in combating drug-trafficking before some intriguing details emerged. It turned out that a first search of the vessel had declared it clean. Acting on a tip, a second team searched the ship, discovering the narcotics. Yet no investigation was launched into the officials who had cleared the ship, while the local customs director who ordered the second search ended up demoted.

Another 220 kilograms (485 pounds) of cocaine were seized at the port of Mersin on a ship coming from Brazil in October 2020.

All those incidents have taken on a new prominence since May 6, when Peker claimed that the western Turkish port of Izmir was the destination of the 4.9 tons of cocaine seized in Colombia last year and that former Interior Minister Mehmet Agar had a share in the cargo. The mobster accused incumbent Interior Minister Suleyman Soylu of covering up the affair.

Turkish authorities, it turns out, have not launched judicial investigations to uncover the connections of the Turkey-bound cocaine seized in Colombia and Panama, and the Justice Ministry has not requested information from the two countries.

Shortly after Peker’s accusations, Turkish security forces captured 1.5 tons of marijuana on a ship off of Syria and more than a ton of Captagon pills bound for the United Arab Emirates at the southern port of Iskenderun. Many saw the operations as a public relations attempt to discredit Peker’s claims, but the mobster did not stop there.

In his seventh video — watched by 10 million people in 24 hours — Peker said the 4.9-ton seizure in Colombia led to a readjustment of the route to Turkey, and the cocaine was now coming via Venezuela. He claimed that Erkam Yildirim, the son of former Prime Minister and AKP heavyweight Binali Yildirim, traveled to Venezuela in January and February to organize logistics, and Agar was “right at the center” of the illicit business. Turkey has become a hub of cocaine distribution to the Middle East rather than Europe, he claimed, singling out Turkish Cyprus and Syria as other key links in the network.

Yildirim denied the accusations against his son, who runs a maritime shipping business. He confirmed his son traveled to Venezuela in December, but only to deliver test kits and masks as pandemic aid to the country.

The merit of Peker’s incriminations aside, the cocaine barons do seem to have turned to Turkey. Journalist Timur Soykan, who has authored a book on Turkey’s narcotics underworld, drew attention to mounting crackdowns in Europe, especially in key port cities such as Antwerp in Belgium and Rotterdam in the Netherlands, where huge amounts of cocaine shipments have been busted in recent years. The cocaine barons saw Turkey as a convenient alternative because it already had a heroin mafia with decades-old experience and infrastructure on the so-called Balkan route from Afghanistan to Europe, he told Al-Monitor.

Two milestones stand out in Turkey’s emergence as a cocaine route. The first is the cartels’ shift to the European market over the past decade due to higher profits than in the United States and lower legal risks in terms of extradition and asset seizures, as The Guardian notes in a recent article. This explains the frequent cocaine seizures in Antwerp and Rotterdam, reputed as some of the world’s leading ports in handling enormous volumes of containers. According to a British crime expert quoted by the paper, a kilogram of cocaine in the United States is worth up to $28,000 wholesale, but that rises to $40,000 on average in Europe and nearly $80,000 in some parts of the continent.

The second milestone is the intensified crackdown in Europe. In March, for instance, a large-scale Belgian operation resulted in dozens of arrests, including policemen and other public servants. The operation could “herald the downfall of a generation of local bosses, although the Belgian and Dutch ‘godfathers’ largely now hide out in Dubai and Turkey,” The Guardian writes.

In a May 23 interview with a Turkish news site, Colombian academic Oscar Parra described several routes used by Colombian traffickers to ship cocaine abroad, noting that shipments to Europe and Turkey travel mostly via Venezuela or the Caribbean shores.

Curiously, this new trend has coincided with a reproachment in Turkey’s ties with Venezuela.

The Turkish police, meanwhile, acknowledge that cocaine smuggling has risen since 2017. In its 2020 report, the anti-narcotics department observes “an increase in Europe-bound cocaine smuggling attempts via our country” as “large seizures in America and Europe have pushed traffickers to use alternative routes.” And according to the department’s 2019 report, Turkey has become “a transit route/stepping stone in the transport of cocaine from Latin America to Europe and Asia.”

The amount of drug seizures in Turkey gives an idea of how extensive the local network is. While EU countries capture about five tons of heroin per year, Turkey seizes more than 20 tons. The heroin seized on the Balkan route represents nearly 60% of the heroin seized globally outside Afghanistan, the 2020 report says, stressing Turkey’s “vital importance” in foiling the heroin traffic.

According to Soykan, the 4.9 tons of cocaine seized in Colombia indicate a huge expansion in trafficking via Turkey and corroborate observers who believe the country is now a new cocaine route. The increased Captagon traffic points also to a new, Syria-linked route, Soykan said, stressing that the latest Captagon shipment seized in Turkey had been smuggled from Syria. According to the Turkish police, the Gulf and other Middle Eastern countries are the primary destinations of the Captagon traffic.

Though the Turkish police boasts of high efficiency against drug smuggling, the seized drugs are widely estimated to represent only a tenth of the illicit traffic. Either way, the recent Latin America-linked incidents and Peker’s claims are hardly detached from the tangle of corruption between politicians, the mafia, and members of the police and the judiciary.

Courts and the law
Drug Abuse