President Recep Tayyip Erdogan backs his interior minister, who has been facing allegations made by a Turkish mobster living abroad, and says he will not call early elections. 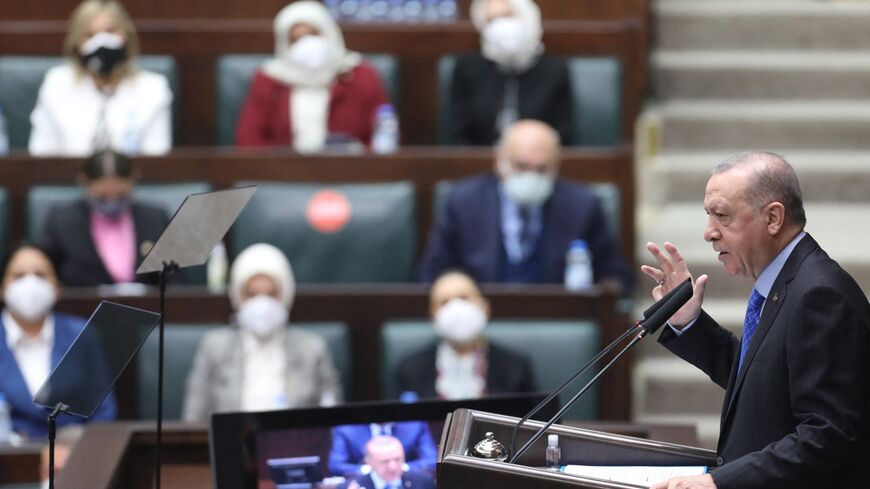 Turkish President Recep Tayyip Erdogan speaks during his ruling Justice and Development Party's group meeting at the Turkish parliament in Ankara, on May 26, 2021. - ADEM ALTAN/AFP via Getty Images

Turkish President Recep Tayyip Erdogan finally broke his silence Wednesday on the barrage of explosive allegations leveled by a fugitive organized crime boss, calling them a plot against Turkey and standing firmly behind his interior minister, who is in the eye of the storm. In so doing Erdogan showed that mounting speculation that his government was tottering and would be forced to let Suleyman Soylu go was squarely wrong.

Speaking before members of his ruling Justice and Development Party (AKP) in the parliament, Erdogan said, “We will foil these games, these plots. No one should doubt that we will disrupt this devious scheme.”

He added, "We pursue members of criminal gangs wherever in the world they flee to. We will not let go of these criminals until we bring them back to our country and render them to justice.” Erdogan said any attack on him and the AKP was an attack on Turkey itself.

Since May 2, Sedat Peker, a notorious mobster with ties to nationalist politicians, has from his haven in the United Arab Emirates been posting videos laying bare the murky web of connections between organized crime, government officials, security forces, the business world and journalists, which remain deeply entrenched in Turkey despite Erdogan’s vows when the AKP rose to power in 2002 to rid the country of such rot. His theatrical delivery, lurching from Quranic verses to threats and profanities, has drawn millions of viewers. Soylu, whom Peker claims was until recently his ally, is the focus of Peker’s ire, with the crime boss vowing to destroy him. Soylu denies the claims.

The fact that Erdogan did not block access to the videos was interpreted, wrongly as things turned out, as tacit complicity in the downfall of his powerful interior minister.

Soylu is the main executioner of Erdogan’s brutally repressive policies against assorted critics, notably the country’s Kurdish political movement, something of a henchman as it were.

The conventional wisdom is that Soylu is acting out the orders of Devlet Bahceli, the leader of the far-right Nationalist Movement Party (MHP). They have — together with an ultra-nationalist anti-American fringe been allied with Erdogan and the AKP since the failed coup in 2016 — been steadily steering the president back to the security state mindset currently guiding Turkish policy.

By this reckoning, Erdogan is hostage to Bahceli’s whims because the president needs Bahceli to win elections and maintain power; given half a chance, Erdogan would dump Bahceli and Soylu in a heartbeat. This dependency helps explain, for example, why Erdogan is unable to get rid of Russian made S-400 missiles that have crashed Turkey’s relations with Washington or to restart a peace process shelved in 2015 with the Kurds, who also tip election results in Turkey. Such reasoning rests on the assumption that despite Erdogan’s authoritarian turn, the electoral process will continue to determine who will govern Turkey.

Erdogan’s performance in parliament Wednesday ought to give optimists pause. His chillingly overt threats against leaders of the main opposition carried the reigning atmosphere of impunity to a new level. He said Meral Aksener, the leader of the center-right Iyi or Good Party, had been taught “a nice lesson” by AKP supporters who heckled her during her recent visit to Erdogan’s hometown of Rize on the Black Sea. Police were forced to intervene in the ensuing skirmish between AKP and Iyi groups and Aksener was forced to cut her trip short.

She ought to be grateful that his supporters hadn’t gone further, Erdogan said. However, this was just a foretaste of things to come. “Just wait and see these are your better days,” he warned.

Aksener has been steadily siphoning votes from the MHP, which she broke away from to form Iyi, and the AKP. Not helping Erdogan is the populace's struggles with mounting joblessness, inflation and poverty. Current opinion polls indicate that the AKP-MHP bloc would no longer command a majority in the parliament nor would Erdogan win presidential elections in a first round of balloting. As such she poses a bigger threat than the pro-secular main opposition Republican People’s Party (CHP), whose popularity remains unchanged.

The CHP and Iyi banded together with the pro-Kurdish Peoples' Democratic Party to unseat AKP mayors in Istanbul, Ankara and other critical cities long dominated by Erdogan’s Islamists in 2019. The upset breathed new life in Turkey’s sleepy opposition and put a huge dent in Erdogan’s seeming invincibility, with many hoping that Peker’s revelations will help build further momentum against Erdogan and force him to call snap polls.

But Erdogan made clear that he had no such plans and that elections would be held as scheduled in 2023. It’s also clear that he will go to any extreme to prevent a repeat of the 2019 debacle, through further repression of the opposition and further weaponizing of the judiciary if need be.

The current scandal is in some ways reminiscent of the one that erupted in December 2013 when prosecutors and police aligned with Pennsylvania-based Sunni preacher, Fethullah Gulen, uncovered evidence of massive corruption implicating Erdogan and his inner circle.

The investigation was quashed, with the investigators dismissed and in some cases jailed. The AKP’s 11-year-long alliance with Gulen ended — seemingly over the latter’s aversion to graft. In truth, it collapsed in a fight over profit and power. Peker’s sudden passion for probity is rooted in much of the same.

The difference is that it is a group of racketeers, with alleged links to the MHP, that has turned against Soylu rather than against the government as a whole. This was spurred by Bahceli’s very public endorsement of rival mobster Alattin Cakici, who was freed under a controversial amnesty law in April 2020, four months after Peker’s flight. Until that time, Peker had been promoting Erdogan and the AKP, helping organize election rallies and physically attacking the ruling party’s opponents, including members of the press.

Erdogan was able to successfully paint the 2013 affair as a foreign-inspired assault against Turkey, much as he is doing with Peker and his videos. And while Erdogan may seem weaker because of his droopy poll numbers and even droopier economy, it can be argued that Turkey's combative leader is actually far stronger today thanks to the country's transition to a presidential system in 2018.

By standing behind Soylu, Erdogan has made the embattled interior minister — and by extension the MHP — that much more beholden to himself, thereby helping to prolong the pact that keeps them in power. Erdogan is the ultimate boss.