Recep Tayyip Erdogan’s open endorsement of a mob attack on a prominent opposition leader indicates the extent of immunity for assaults on opposition in Turkey. 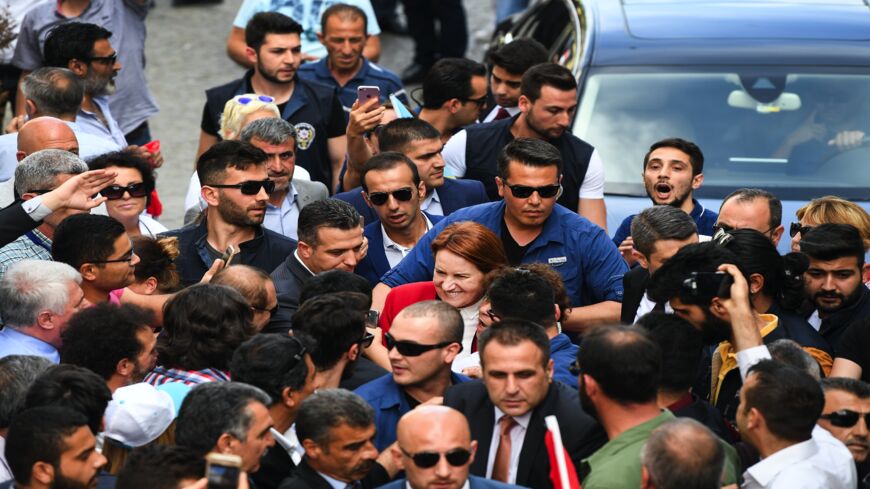 A mob attack on a prominent opposition leader and her entourage has sounded the alarm in Turkey on the extent of impunity for perpetrators of assaults on the opposition, as the Turkish president has openly endorsed the incident as a “good lesson” to his critics.

Good Party leader Meral Aksener traveled to Turkey’s Black Sea province of Rize on May 21, which is also the hometown of Turkish President Recep Tayyip Erdogan. As Aksener was scouting the streets and talking with shopkeepers in various parts of the province, dozens of Erdogan supporters gathered around her entourage to protest her remarks likening Erdogan to Israeli Prime Minister Benjamin Netanyahu amid the Israeli-Hamas flare-up.

Aksener continued her trip, as the crowd shouted slogans in support of the Turkish president. Things took a violent turn when the crowd tried to approach her, setting off a brawl between Aksener’s aides and Erdogan’s supporters. The opposition leader was forced to leave the site and taken to her car unharmed. The party officials criticized the police for not taking timely measures to prevent the incident.

The number of assaulted opposition figures, including the leader of the main opposition and prominent lawmakers, has reached almost 60 in the past two years amid fears of more to come in a climate where Erdogan openly approves aggression and threatens more.

“She put me in the same pot with Netanyahu. … [She] was given a good lesson in my hometown Rize,” Erdogan said on May 26, addressing his parliamentary group.

“Pray that they haven’t gone too far while giving her the lesson,” he added. “This is a first. There is more and more to come. … These are your good days,” Erdogan said, threatening Aksener.

Mob attacks on opposition politicians have become common occurrences in Turkey over the past years. In 2019, the leader of the main opposition Republican People's Party, Kemal Kilicdaroglu, was attacked by a mob near the capital, Ankara, during the funeral of a soldier. A man punched Kilicdaroglu in the face as he was taken to a nearby house for refuge. Defense Minister Hulusi Akar, also at the funeral, tried to assuage the mob, telling them they “achieved their goal” as the mob chanted “Burn this house down.”

According to Kilicdaroglu’s attorney, Celal Celik, the police's tendency to act slowly against such incidents is telling. Celik sees the attacks as orchestrated attempts on the opposition.

The trial of 36 suspects who are accused of attacking Kilicdaroglu is ongoing, but no one is under arrest currently. Following the assault on Aksener, the Rize prosecutor’s office swiftly launched an investigation, but only on the Good Party officials who were involved in the brawl.

In addition to Kilicdaroglu and Aksener, Baris Atay, a lawmaker from the Turkey's Workers’ Party, was beaten by four men in Istanbul last year. The attack came just after his quarrel with Interior Minister Suleyman Soylu on social media. Similarly, Selcuk Ozdag, deputy chair of the opposition Future Party, was severely beaten outside his home in Ankara in January after criticizing the Justice and Development Party’s (AKP) de facto coalition partner, the Nationalist Movement Party (MHP), in an interview with daily Yenicag.

On the same day, Orhan Uguroglu, the journalist heading the Ankara office of Yenicag, was also beaten outside his house. Although the attacks looked like they were linked to and organized by the same center, suspects of both incidents claimed they didn’t act on the instructions of anyone and the incidents were a mere coincidence.

Uguroglu argued that the prosecutor’s office tried to downplay the incident by charging the assailants on the grounds of occasioning actual bodily harm. Upon Uguroglu’s objection, his hearing was postponed until November. Similarly, the trial over Ozdag’s assault was postponed until September after its first hearing.

Uguroglu is not alone. According to CHP lawmaker Utku Cakirozer, more than 40 journalists were physically assaulted over the past three years.

The lack of comprehensive investigations into the incidents, lawsuits filed on simple charges against the perpetrators and long-running trials seem like encouraging factors in increasing attacks on opposition and dissidents.

“People are being arrested for criticizing Erdogan even in the simplest terms, but when it comes to those [assailants] who act with the intent to kill, they are being given passage,” Celik told Al-Monitor.

Gulizar Bicer Karaca, deputy head of the CHP, warns against the consequences of such impunity.

“If you fail to create the perception that the perpetrators will be immediately made to pay the price for their crimes and will be punished in the most severe way, then attacks on journalists and politicians will continue. Indeed, that’s what is happening,” she told Al-Monitor.

“Turkey is no longer a state of law. An order where the judiciary is not functioning anymore means mafia-like governance is prevailing,” Karaca added.

Karaca’s reference to the mafia is not for no reason. Alaattin Cakici, a notorious mafia boss, openly threatened Kilicdaroglu in November 2020, accusing the main opposition leader of treason. While the probe launched into the mobster’s threats yielded no results, Devlet Bahceli, leader of the MHP and Erdogan’s coalition partner, defended Cakici, saying he and the mob leader believed in the “same cause.”

Nowadays, another mafia leader has grabbed the spotlight. Revelations by Sedat Peker, a convicted organized crime boss who rattled Turkish politics with his videos claiming to expose Ankara’s “dirty secrets,” also gave clues about how well organized these attacks are. Peker recently admitted he was the instigator of a 2014 assault on former AKP lawmaker-turned-Erdogan critic Feyzi Isbasaran and of a violent protest against daily Hurriyet in 2015. Peker claimed he was involved in both incidents upon the request of AKP officials.

The latest revelations, top level endorsements for the perpetrators and shortfalls in the judiciary processes make it difficult to believe such attacks are mere spontaneous manifestations of anger; rather, they seem to be a systematic effort of intimidation.

"The close ties between the mafia and Turkish politics have now become a concrete fact before us,” Hasan Seymen, deputy head of the Future Party, told Al-Monitor, adding that the simple goal behind these attacks was to create a “culture of fear” as authoritarian governments do.

According to Good Party lawmaker Umit Dikbayir, the assaults are an indication of another important trend. The government “is in panic as its votes are going down,” Dikbayir told Al-Monitor

Uguroglu attests. “The goal is to tactfully intimidate intellectuals, journalists and politicians,” he told Al-Monitor. Governments all over the world resort to similar intimidation tactics to divert attention when they begin to lose their power, he added.

Given the widespread impunity, similar attacks on various opposition voices seem highly likely in a culture where Turkey’s leaders openly defend perpetrators. Besides, some believe darker times might be ahead as Turkey drifts toward authoritarianism.

“If impunity for those perpetrators becomes common practice, then the law of the jungle will prevail,” Seymen said.

Uguroglu thinks the upcoming period will see an increase in attacks on government critics. Reminding of a recent claim by a former Turkish intelligence officer that “political murders” could be next, Uguroglu warns also against graver prospects.