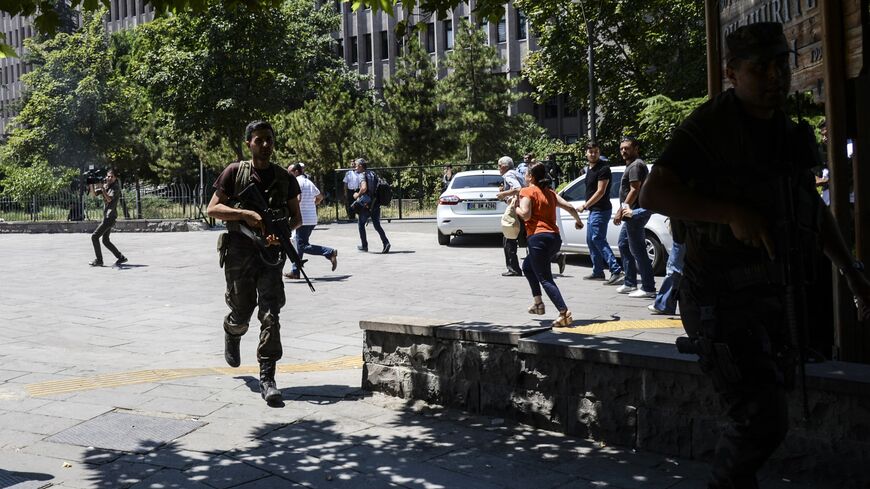 People flee the streets as Turkish police officers operate in front of the courthouse on July 18, 2016, in Ankara, in the aftermath of an attempted coup against the government. There are allegations that government weaponry was handed over to ruling party members following the putsch. - ILYAS AKENGIN/AFP via Getty Images

Fugitive Turkish crime boss Sedat Peker has dropped a new bombshell in his tell-all vendetta against Ankara, claiming that weapons were secretly distributed to members of the ruling Justice and Development Party (AKP) after the failed coup attempt in July 2016. The allegations have stoked fears in some quarters about how far the country’s rulers might go to retain their grip on power amid growing signs that their popular support is sagging.

In a series of tweets last week, Peker — a convicted gangster who enjoyed some favor with certain AKP members but was apparently cast out as a result of power struggles in government ranks — accused Interior Minister Suleyman Soylu of “coordinating” the distribution of weapons, not registered in the state inventory, to pro-government groups in the wake of the putsch, when he was still labor minister. The mobster described in ample detail how a crate of AK-47 rifles was allegedly taken from Esenyurt, an outlying Istanbul district, to the neighborhood of Balat in the ancient heart of the city in August 2016. He named the pair in the vehicle as Abdulsebur Soganli, head of the AKP youth branch in Esenyurt, and Ahmet Onay, an Interior Ministry employee. The weapons, he said, were handed over to Osman Tomakin, who today is the chair of the AKP’s youth branches in Istanbul. Onay confirmed he was in the car that night, but said he stayed in the vehicle and was not aware what cargo was handed over to Tomakin.

Peker’s revelations have once again turned the spotlight to allegations that weapons were distributed to government supporters after the putsch, which have been coupled with a spike in the number of missing weapons and a dramatic increase in individual armament in the country. Yet prosecutors remain mum on any judicial investigation into the mobster’s claims.

Commenting on Peker’s allegations, Mehmet Tum, a former legislator for the main opposition Republican People’s Party who frequently brought up the issue in parliament, pointed to a staggering increase in the Interior Ministry’s tally of lost or stolen weapons in the wake of the coup attempt. Citing ministry reports, he noted that the number of missing weapons jumped to about 107,000 in 2017 from about 14,000 in 2014. “Such a terrible increase would have been the subject of an urgent probe anywhere in the world. But was it investigated in Turkey? No!” he tweeted.

Tum also brought up allegations that police- or army-owned weapons ended up in civilian hands during the chaotic night of the putsch as crowds took to the streets to confront the soldiers and claimed that such weapons were later used in murders. At least one such incident has been officially confirmed after a homicide suspect said in 2017 he had obtained the murder weapon — a MP5 submachine gun — when weapons were distributed outside the police headquarters in Ankara as the coup attempt unfolded. The Ankara governor’s office confirmed that weapons had been hastily distributed to police officers, without keeping records of who got what, but denied that civilians were among the recipients. The weapons were later collected, it said, while acknowledging that an MP5 had been missing.

Tum said that he had submitted numerous parliamentary questions on the issue, but that the Interior Ministry made “obscure and evasive” replies. Similarly, the AKP majority in parliament has blocked opposition proposals for parliamentary probes into the missing guns, and the government continues to ignore the public outcry over Peker’s claims.

Many in Turkey have come to ask whether some pro-government groups are being systematically armed, drawing on public means. Such fears have been fanned also by threats blurted out by AKP supporters. Last year, for instance, Sevda Noyan, a pro-government figure, boasted on television that her family was “well equipped, both materially and morally,” to defend the government and “could do away with 50 people,” adding that she had “a list at the ready,” including neighbors. Criminal complaints against Noyan led to her indictment for threats intended to cause fear and panic, but the case was dropped on the grounds of nonprosecution.

Adding gravity to the matter is a legislative decree, issued in December 2017 that grants judicial immunity to civilians involved in “the suppression of the coup attempt and terrorist acts on July 15, 2016, and any follow-up acts.” The provision has come under fire for open-ended wording and sparked widespread concern that it would embolden vigilante violence against any street protests the government deems a “coup attempt.”

Peker’s claims are the latest in his spree of grave corruption allegations against AKP members and cronies since early May. The reports are hard to dismiss, as he was more or less an AKP insider before he fled Turkey in late 2019. In the several preceding years, he enjoyed special police protection, organized rallies in support of President Recep Tayyip Erdogan and hurled threats at the opposition with impunity.

The judiciary — largely under government control — and the AKP-dominated parliament are playing possum, while opposition parties and the critical media have little means to exert pressure on Ankara to get to the core of the charge. Without an investigation, the allegations about the armament of pro-AKP groups will likely only deepen polarization and unrest in a country that is already under the risk of a general governance crisis amid economic woes, made worse by the COVID-19 pandemic, sharp political tensions between a repressive government and a struggling opposition and increasingly visible power struggles between rival cliques within the state.