Turkish crime boss Sedat Peker speaks out about arms shipment to radical rebels in Syria in his latest barrage of allegations against figures close to the government. 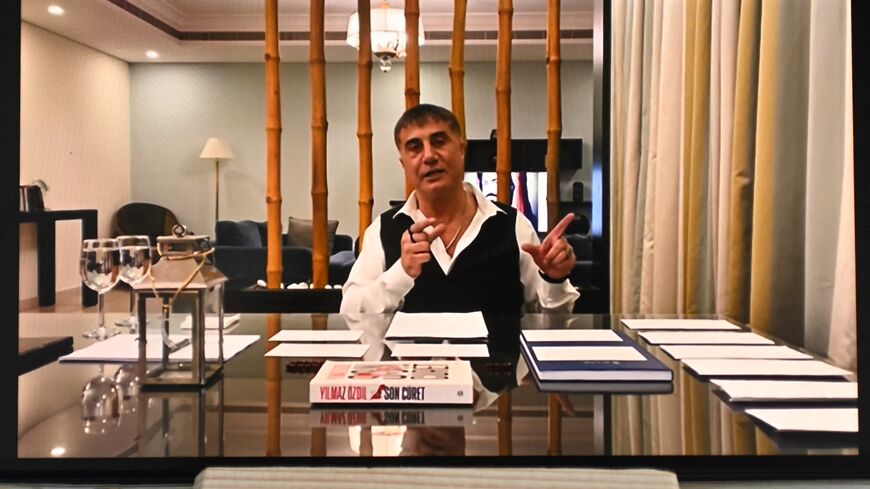 Turkish mobster Sedat Peker is seen speaking on his YouTube channel in this photo of a cellphone screen taken in Istanbul on May 26, 2021. - OZAN KOSE/AFP via Getty Images)

Fresh allegations by a fugitive Turkish mobster have rekindled controversy in Turkey over arms shipments to Syria and murky cross-border trade, allegedly involving the inner circle of President Recep Tayyip Erdogan, but his revelations constitute just a few pieces in a giant puzzle.

In a series of viral videos since early May, Sedat Peker, a convicted criminal gang leader, has been implicating members and cronies of the ruling party in myriad crimes and laying bare his own ties with politicians. Peker — a self-described nationalist who used to organize rallies in support of Erdogan and enjoy favor with pro-government circles — says his revelations are score-settling for his being cast out, apparently as a result of power struggles in government ranks.

In his latest video May 30, Peker recounted how he shipped steel vests, binoculars and other equipment aid to Syrian Turkmens in November 2015. He claimed that SADAT, a private military company run by a figure close to Erdogan, requested to add arms-laden trucks to his convoy, yet the weapons went to Jabhat al-Nusra, the Syrian offshoot of al-Qaeda, rather than the Turkmens.

SADAT — founded in 2012 by Adnan Tanriverdi, a retired general who has served as an adviser to Erdogan — rejected Peker’s claims as “slander.”

Peker also made allegations about commercial flows between Syria and Turkey, including oil, tea, sugar, aluminum, copper and used cars. Those involved in such dealings, he claimed, have the approval of Metin Kiratli, the administrative chief of the presidential office, and coordinate with businessmen Murat Sancak and Ramazan Ozturk, both of whom belong to business families close to the government. Heading the dealings on the Syrian side, he said, is the economy chief of Hayat Tahrir al-Sham, the radical group holding sway in the northwestern province of Idlib that was formed in 2017 through a merger of Jabhat al-Nusra (Jabhat Fatah al-Sham) and other groups.

Syrian opposition media earlier identified MT Group as a supplier of fuel to the Hayat Tahrir al-Sham-held region. The company is owned by Sancak, who is close to Erdogan’s son-in-law Berat Albayrak. Ozturk, meanwhile, is the son of one of the shareholders of BMC, the manufacturer of armored vehicles used in Turkey’s military interventions in Syria and Libya.

Responding to Peker’s claims, Sancak said he never had any trade dealings in Syria.

By targeting figures linked to the presidential office, Peker is trying to put pressure on Erdogan to force him to intervene in the row in his favor. Tellingly, he took pains to absolve the National Intelligence Organization (MIT) and the military of any involvement in the arms shipment he mentioned. Stressing he remains loyal to the Turkish state, he said he had been studying the norms of international law and his revelations did not implicate the state per se.

Arms shipments to Syria came under public spotlight in January 2014, when security forces in southern Turkey discovered weapons and ammunition on Syria-bound trucks, which turned out to have been rented by the MIT. Ankara covered up the affair, claiming the trucks carried assistance to the Turkmens. Yet a number of Turkmen representatives denied receiving any aid.

Following Peker’s video, former Prime Minister and Foreign Minister Ahmet Davutoglu, who now leads an opposition party, insisted that the trucks intercepted in 2014 were taking assistance to the Turkmens. “No one can see this as support for terrorists,” Davutoglu, foreign minister at the time, said, stressing that Peker’s claims about SADAT pertained to a later period. Yet Davutoglu was prime minister when the mobster sent his aid convoy to Syria amid much fanfare.

Turkey, in fact, has witnessed scandals much bigger than Peker’s claims. In November 2013, security forces discovered rocket parts and launching pads in a truck in the southern province of Adana, which they stopped upon a tip-off. The cargo, it turned out, was destined for Jabhat al-Nusra and other Islamist factions. In their testimony to prosecutors, the two men in the vehicle claimed they were acting at the behest of the state and had used the same truck to carry munition to a military outpost on the Syrian border the previous month. They implicated also Heysem Topalca, a Syrian Turkmen believed to have played a key role in Turkish intelligence operations in Syria, who died in a car accident in February.

Next came the interception of the so-called “MIT trucks.” The first was stopped in Hatay province, which borders Syria, on Jan. 1, 2014. The security forces were not allowed to check the truck on the grounds that its cargo was a “state secret” and MIT operatives threatened the local prosecutor who insisted on searching the vehicle. Later that month, three trucks were stopped in Adana and the search turned up rocket bullets, ammunition and several anti-aircraft guns in their cargo. The soldiers and prosecutors involved in the interception ended up with heavy jail terms for espionage.

One of the first indications of arms shipments to Syria came in June 2011 after bloody clashes between rebels and Syrian government forces in Jisr al-Shughur, a town near the Turkish border. Journalists in the area reported finding Turkish-made bullet casings after the clashes. Turkey’s state-run Anatolia news agency fired its Syria correspondent after she, too, reported the news.

In the early stages of the Syrian war, when border crossings were still under Damascus’ control, the clandestine traffic across the border followed routes used by smugglers for decades. Opposition rebels trained and equipped in Turkey’s border town of Reyhanli, for instance, were bused to Syria via such routes. Witness testimonies about arms shipments via the same routes would later enter the files of the court case involving the MIT trucks.

The routes diversified after Damascus lost control of the Bab al-Hawa and Bab al-Salama crossings in the summer of 2012. Ankara, which had vehemently denied arming rebel groups, changed tone after the exposure of the MIT trucks, adopting a narrative about helping the Turkmens, which proved instrumental in fending off opposition criticism over Turkey’s involvement in the war.

In a move that made it even easier to sway public sentiment, Ankara reframed its Syria policy as a campaign to prevent the emergence of a “Kurdish belt” along its border after the United States began supporting the Syrian Kurdish People’s Protection Units (YPG) against the Islamic State in October 2014. At home, the government ended a peace process with its own Kurds in mid-2015, following up with a crackdown on the Kurdish movement. The YPG was portrayed as the main threat to Turkey in Syria and equated with the Kurdistan Workers Party, which has fought Ankara since 1984 and is designated as a terrorist group, and arms shipments to Syria were justified as efforts to combat terrorism. Operation Euphrates Shield —- the first of several Turkish military campaigns in northern Syria — marked a milestone in 2016, as weapons and military equipment began to flow openly across the border. And because opposition parties largely backed the operations, the controversy over arms shipments died down.

Against that backdrop, the debate triggered by Peker’s revelations is a debate over just a snippet of an extensive traffic.

In March 2013, The New York Times reported elaborately how the CIA played a role in arms shipments to Syrian rebels — described as a “cataract of weaponry” by one official — notably by helping “Arab governments shop for weapons, including a large procurement from Croatia,” while Saudi Arabia, Qatar, Jordan and Turkey organized their transfer. According to the report, the airlift included more than 160 military cargo flights by Jordanian, Saudi and Qatari planes landing mostly in Turkey, from where the weaponry was shipped by land into Syria.

Secret bases were established in Turkey’s border provinces of Gaziantep and Hatay in 2012 to train and equip Syrian rebels, along with a CIA-MIT coordination center in Istanbul. A Croatian paper claimed that 3,000 tons of weaponry destined for Syrian rebels were flown to Turkey from Zagreb’s international airport alone from November 2012 to February 2013.

Libya was another source of arms shipments to the rebels in the early stages of the Syrian civil war, exposed by at least two incidents of ships carrying arms from Libya in 2012.

Amid countless reports that the arms were ending up in the hands of Jabhat al-Nusra, the United States eventually ended its covert program to supply and train Syrian rebels, but Turkey’s engagement with radical factions continued. Today, Hayat Tahrir al-Sham controls the Bab al-Hawa crossing with Turkey and thus the flow of goods, while the Turkish military’s posture in Idlib serves as a shield for the group against government forces.