A trial of gendarmerie officers and prosecutors in Istanbul is producing embarrassing revelations for the government. 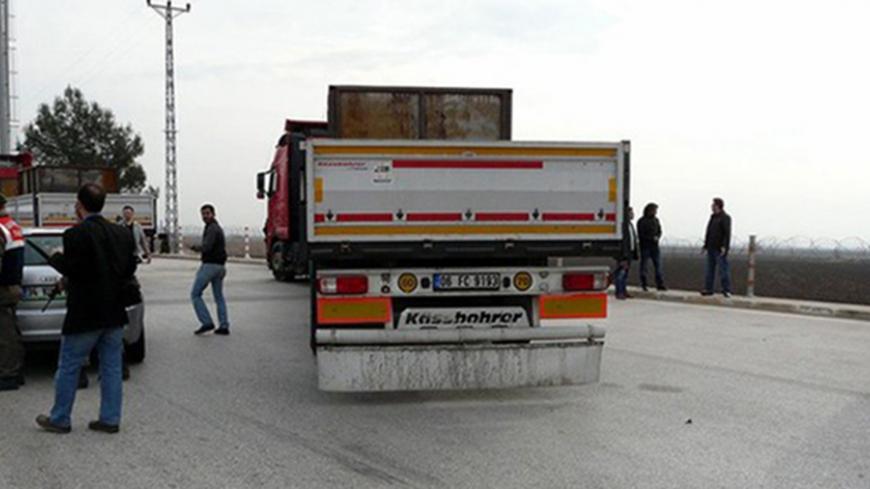 According to documents briefly leaked onto the Internet in Turkey on Jan. 19, 2014, the prosecutor of an Adana court instructed the Adana Provincial Gendarmerie Command to stop and search three trucks suspected of carrying weapons into Syria. - Anonymous

The accusation that Turkey has provided radical Islamists in Syria with weapons, and keeps doing so, continues to be voiced despite government officials' denials. Ankara’s reluctance to get actively involved in the US-led military coalition against the Islamic State (IS) and other radical groups in Syria is also fueling the debate.

Speculation about Turkish aid to radical groups fighting the Assad regime has been re-energized by a trial of gendarmerie officers and prosecutors in Istanbul. They are accused of membership in a “terrorist organization” set up by Fetullah Gulen to allegedly undermine President Recep Tayyip Erdogan and topple the ruling Justice and Development Party (AKP).

Those in custody in connection with this case number about 50 and are being tried for stopping a truck in November 2013 and three trucks in January 2014 on the suspicion that they were carrying weapons to Syria. The operations were ordered by local prosecutors, who were acting on tips.

The trucks turned out to have been chartered by Turkey’s intelligence service (MIT); the government continues to insist that they were carrying humanitarian aid to Turkmens in Syria besieged by the Syrian army.

The first truck intercepted near the city of Adana in November 2013 was prevented from traveling to Syria. The other three, intercepted in January 2014 in Hatay, which is also near the Syrian border, continued on their way after the physical intervention of MIT personnel traveling with them.

Both incidents left Erdogan livid. He accused members of the Gulen movement of trying to undermine his government by planning the raids on the trucks at a sensitive moment for Turkey regarding developments in Syria.

Erdogan sees this as an important showcase trial against the Gulenists and expects to score political points domestically through it in the lead-up to the general elections June 7. The accused are being tried for conspiracy against the elected government.

Opposition parties continue, however, to make sure that the claim that the trucks were carrying weapons to radical groups in Syria are kept alive, and insist such assistance is continuing today. Similar allegations have also been aired in the Western media.

The New York Times reported in early May from the Turkish town of Akcakale that bags of ammonium nitrate, which is used as fertilizer, were being sent from that region to parts of Syria held by IS.

Ammonium nitrate can be used for bomb making, and The New York Times quoted a local politician from the opposition saying that this is what it was being used for in Syria. Local officials insist, however, that it's being used for agricultural purposes in Syria, which appears unlikely in a region torn by war.

But assuming what officials say is true, this still raises the question why a chemical compound — whose destructive force was seen in the Oklahoma City bombing in April 1995 — is being allowed into part of Syria held by IS.

Yasin Aktay, a deputy head of the AKP, inflamed the debate recently when he said during a campaign visit to the southeastern city of Siirt that the intercepted MIT trucks were heading for the Free Syrian Army. While he did not mention the consignment on the trucks, his remark belied claims that it was aid for Syrian Turkmens. His words were also accepted as an admission that the trucks were carrying weapons.

Ibrahim Kalin, Erdogan’s spokesman and chief foreign policy adviser, later denied that Turkey had ever provided weapons to anyone in Syria. “Turkey has not sent any group in Syria any weapons since the beginning of the Syrian crisis,” he told reporters in Washington last week, adding that he did not know what Aktay had based his claim on.

Kemal Kilicdaroglu, the leader of the main opposition Republican People's Party (CHP), was not prepared, however, to let the matter rest. He told daily Hurriyet that he had seen footage of the MIT trucks taken while they were being searched. “Yasin Aktay is telling the truth. We have film footage showing how the cases on the trucks were opened, and the bombs there. I saw this. Therefore, there is nothing to hide. [Aktay’s] remarks show that this was not humanitarian aid,” Kilicdaroglu said.

Kalin’s response also contradicts recent news reports, which have not been officially denied, that Turkey, Saudi Arabia and Qatar are assisting elements of the Syrian opposition that are making headway in Syria. These include Jabhat al-Nusra, the al-Qaeda-linked group, which reportedly seized Idlib recently with arms supplied by Turkey.

Almost all the gendarmerie officials and prosecutors involved in the 2013 and 2014 raids on the MIT trucks are being tried for conspiring against the elected government. The trial, however, is already producing embarrassing revelations for Erdogan and the ruling AKP.

Last week, Reuters quoted a prosecutor and the court testimonies it had obtained of the gendarmerie officers on trial as alleging that rocket parts, ammunition and mortar shells in the intercepted MIT trucks were heading to parts of Syria under the control of radical Islamic groups.

"Our investigation has shown that some state officials have helped these people deliver the shipments," prosecutor Ozcan Sisman, who ordered the search of the truck in 2013, told Reuters.

Retired Maj. Gen. Armagan Kuloglu, a frequent commentator on military developments in Syria and Iraq, is adamant that the gendarmerie officers intercepting the MIT trucks were doing their jobs.

“Normally the relevant authorities in the region would have been officially informed that MIT trucks were going to pass and should not be stopped. This was not done. There was, however, a tip-off about trucks laden with weapons so the gendarmerie had to act or it would not be doing its job,” Kuloglu told Al-Monitor.

He said the person who made the tip-off may have had bad intentions against the government but this did not mean the gendarmerie was culpable. He also admitted that the fact that local officials were not informed about the trucks only heightened suspicions about their consignment.

Getting rid of the Assad regime, rather than combating IS, continues to be the main priority for Ankara today. Turkey’s reluctance to get involved militarily against IS and other such groups is also said to be the result of divergent priorities with Washington on this score.

US Sen. John McCain, R-Ariz., aired a similar view recently on MSNBC. Talking after the fall of Ramadi in Iraq to IS, he said Turkey was reluctant to assist in the fight against IS because the United States has so far been unwilling to target the Syrian regime.

Washington, however, appears determined on keeping the focus on IS. The rumor in Ankara is that the delay by Turkey and the United States in officially starting their joint program to train and equip the moderate Syrian opposition also stems from the clashing Turkish and US priorities.

“It is not right to say there is no training of Syrian opposition forces,” Kuloglu said, conceding that the different priorities of Turkey and United States are a complicating factor.