Turkey’s government has used the "state secret" shield to conceal the cargo of a truck suspected of transporting arms to Syria and banished the prosecutor who attempted to search the vehicle. 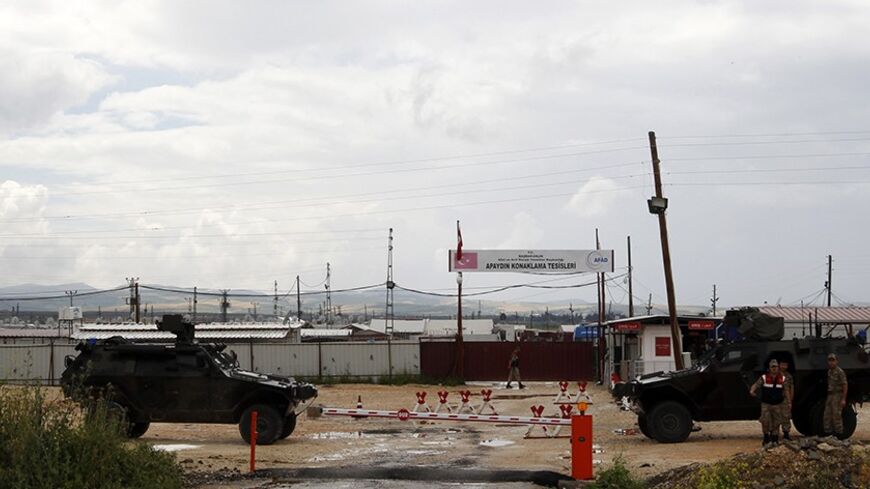 Turkish soldiers with armored vehicles guard the entrance of Apaydin refugee camp in Hatay province, on the Turkish-Syrian border, May 12, 2013. - REUTERS/Umit Bektas

With the start of the corruption probe on Dec. 17, Turks came to realize that various security and judicial offices in the state had been busy amassing explosive dossiers to corner the government. Promising trouble for Turkey at home and abroad, some of the dossiers pertain to Syria. Depending on developments, they may also be deployed on the chessboard in the coming days.

Turkey’s judicial system, managing to somehow muddle along, short-circuited as the government embarked on a series of interventions, removing investigators from the probe and amending procedural rules to thwart the investigation. To speak of the separation of powers in Turkey has become a luxury, with prosecutors and police getting burned if they touch the government.

The government argues that its interventions in the judiciary and the police are aimed at purging the “parallel state” — the presence of the Gulen community in the state establishment.

A similar intervention occurred on Jan. 1 when a truck was stopped in Hatay, a province bordering Syria, following a tip that it was transporting weapons. Despite their attempts to perform their duties, the security forces and the prosecutor were scandalously barred from searching the vehicle. The suspicious truck was whisked away from the prosecutor, the gendarmerie forces and the police on the grounds that it constituted a “state secret.” Regional prosecutor Ozcan Sisman was threatened by about 15 members of the National Intelligence Organization (MIT) when he insisted on searching the truck. The prosecutor was forced to quit the probe and was eventually transferred from Adana to Gaziantep. It was effectively a punishment. Sisman was replaced by Gaziantep prosecutor Aziz Takci, who also took over the truck case.

Now let’s rewind the reel to see how the truck farce was staged and how deep the government has sunk in the Syrian quagmire, along with its official and civic apparatus.

According to an official report by Yasar Kavalcioglu, the prosecutor of Kirikhan, the district where the incident occurred, gendarmerie troops stopped the truck and an escort vehicle on the Kirikhan-Reyhanli road following a tip that the truck carried contraband weapons, and then informed the prosecutor. Kavalcioglu, in turn, informed the Adana-based Sisman, who was in charge of terror-related offenses. Acting on the instructions he received, Kavalcioglu, accompanied by his deputy and a clerk, went to the scene. The men in the truck presented themselves as MIT personnel and did not allow the vehicle to be searched, saying that the cargo was a state secret. Sisman, updated about the developments, asked his colleague to wait until he arrived at the scene. In the meantime, higher echelons began to intervene.

The provincial gendarmerie commander telephoned the head of the district unit, Captain Kubilay Ayvaz, ordering the release of the truck and the MIT personnel. Ayvaz refused to comply on the grounds that the incident was a judicial matter, with Sisman in charge. Then, Hatay Governor Celalettin Lekesiz sent a written order to the provincial gendarmerie command for the release of the personnel, stressing that the cargo belonged to MIT. (Lekesiz was in fact making threats, saying that the functionaries in question had a “special status,” working directly for the prime minister, and that their detention would result in “criminal consequences.”) As a result, Ayvaz was forced to let the truck and the personnel go. Sisman, still on his way to the scene, reiterated his instructions that the truck should be held, and the vehicle was stopped again as it drove on the road to Reyhanli.

The security forces who stopped the truck this time were not gendarmerie troops but police from the Hatay anti-terror department. When Sisman finally arrived at the scene he, too, was unable to conduct a search. The police retreated and he was left alone, accompanied only by his bodyguard. According to a source speaking to Al-Monitor, the tension shot up to the point of confrontation, and Sisman later told confidants, “I barely escaped with my life.” Despite reports claiming that Sisman voluntarily handed the case over to the chief prosecutor, he was in fact pressured to resign.

According to Fatih Yagmur, the Radikal reporter who broke the scandal, a MIT official and a regional officer of the Humanitarian Relief Foundation (IHH), which has close links with the government, were aboard the truck, which had been rented in Ankara. The IHH categorically denied any involvement in the incident, calling the allegations a smear conspiracy. Still, according to another claim on which the IHH has not officially commented, images held by the prosecutor indicate that the vehicle is linked to the IHH. But since the alleged images have not been publicly released, the claim has yet to be confirmed.

The IHH, long known for its relief work in conflict zones, has aroused suspicions that its work in Syria over the past three years went beyond humanitarian missions. These suspicions may be unfounded, but the image was shaped by IHH volunteers posing for pictures with armed militants fighting the Syrian regime, the IHH delivering its aid to opposition-controlled areas and claims that IHH officials frequented the training camps of armed groups. Even though the charity categorically denies the allegations, the latest incident sparked debate over the role that organizations like the IHH play in the Syrian civil war. Officials of the Democratic Union Party, which controls Syria’s Kurdish region Rojava, had earlier told Al-Monitor that they had presented the Turkish authorities with a list of Turkish organizations backing armed groups in Syria and asked them to take appropriate measures.

The truck that carried the “state secret” was supposed to enter Syria through the Oncupinar border crossing, which opens on a region controlled partly by the Salafist-dominated Islamic Front and partly by the al-Qaeda-linked Islamic State of Iraq and al-Sham (ISIS). The route fuelled suspicions over possible links between those groups and the Turkish government.

Interior Minister Efkan Ala scolded the prosecutors, the gendarmerie and the police: “Everybody should mind their own business.” He argued that the truck carried aid to Syrian Turkmen, but overlooked the fact that no Turkmen settlement existed on the vehicle's route. Two deputy chairs of the Syrian Turkmen Assembly quickly refuted Ala’s explanation. One, Hussein Abdullah, said, “There has been no truck bringing aid to the Turkmen,” while the other, Abdurrahman Mustafa, said he was “not aware of such aid.” Customs and Trade Minister Hayati Yazici added to the incoherence at the higher echelons of the state, saying, “According to our records, the vehicle in question did not exit from our customs gates.”

Mevlut Dudu, a parliament member from the main opposition Republican People's Party (CHP), made the following assessment to Al-Monitor: “There are no Turkmen villages in the region facing Oncupinar. The Turkmen live in the areas facing Hatay’s Yayladagi district. The explanation that the aid was destined for the Turkmen is inconsistent. The government’s links with the groups in Syria are known by everybody in the region. The government’s obstructive attitude vis-a-vis the judiciary, which we have been witnessing since Dec. 17, has recurred in this incident, too. Cargo destined to people in Syria has been hijacked from the state’s prosecutor. This is yet another sign that the government is growing dictatorial.”

Dudu and his fellow CHP deputies from Hatay, Refik Eryilmaz and Hasan Akgol, unsuccessfully tried to hunt down the truck and then lodged a criminal complaint against the interior minister, the Hatay governor and the MIT personnel in the truck. Sisman, for his part, submitted his official report of the incident to the Adana chief prosecutor’s office, demanding further action.

Due to MIT’s direct involvement in the truck, the government was caught red-handed this time. Previously, it had managed to censor footage from security cameras after the Feb. 11 explosion at the Cilvegozu border crossing, manipulated the May 11 bombing in Reyhanli although prior intelligence was available and al-Qaeda claimed responsibility, protracted the court case over the chemicals seized in Adana on May 27 and sought to cover up the court case over the truck loaded with weapons seized again in Adana on Nov. 7. To conceal something whose exposure it fears, the government has now resorted to the “state secret” cover, reducing itself to an administration exporting its “state secrets” to the rebels in Syria.