Turkish security discovered a truck full of weapons en route to Syria, creating yet another controversy for the Erdogan government. 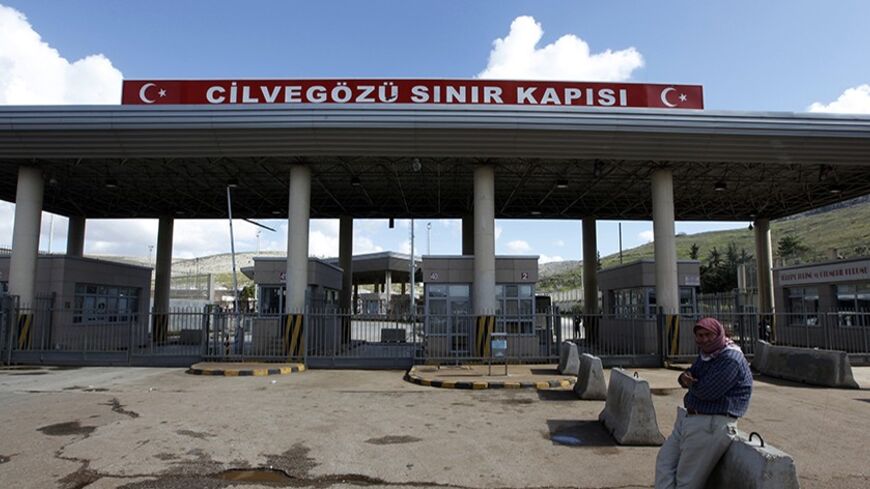 A man waits in front of the closed Cilvegozu border gate near the town of Reyhanli on the Turkish-Syrian border in Hatay province, Feb. 12, 2013. - REUTERS/Umit Bektas

Turkish Prime Minister Recep Tayyip Erdogan, who is already having to cope with a major scandal that has severely undermined his claim of being a relentless fighter against corruption in high places, is now faced with a fresh crisis involving Syria that has the potential to not only further undermine his credibility but also damage Turkey’s ties with its Western allies.

The latest debacle follows a scoop by mass circulation daily Hurriyet involving a truck laden with weapons said to be heading for Syria. The story broke a few days after the regime of Syrian President Bashar al-Assad filed a complaint with the UN Security Council alleging that Turkey was supporting anti-government militants in Syria.

Syria’s ambassador to the UN, Bashar Jaafari, claimed in a letter to UN Secretary-General Ban Ki-moon, which was released to the press on Jan. 1, “Turkish authorities are systematically offering help in supplying arms to terrorists operating in a number of districts [in Syria].”

“They support the groups which every day carry out terrorist attacks against the Syrian people, government buildings and other infrastructure facilities,” Jaafari wrote. The letter continued, “They were trained on the border with Syria, after which the Turkish authorities helped them penetrate the neighboring country.”

The Syrian envoy’s letter was taken by Turkish government officials as a propaganda effort by Damascus to add to the fog of war and undermine Ankara’s political support for the legitimate elements of the Syria opposition.

It is no secret, however, that Turkey provided logistical support to al-Qaeda-related groups in the past, such as Jabhat al-Nusra, which it saw as an effective fighting force against Assad’s military machine. Still, Ankara has consistently denied it provides arms to any group in Syria, claiming it is on alert against any weapons going through Turkish territory to these groups.

The revelation by Hurriyet is set to undermine these claims and has lent credence to the Syrian allegation, thus adding to the Erdogan government’s Syrian headache, which has gradually increased since the country's crisis broke out in March 2011.

According to the Hurriyet report, the truck in question was stopped by police attached to anti-terrorism squads shortly after leaving the town of Reyhanli near the Syrian border. The police were said to have acted on a tip that indicated the truck was laden with weapons destined for Syria.

Three men on the truck — who were later revealed to be members of Turkey’s intelligence service, Milli Istihbarat Teskilati (MIT) — prevented the police from searching the truck, arguing it was outside city limits, where jurisdiction belongs to the gendarmerie. The gendarmerie was then called in, and their cursory search reportedly revealed weapons and military equipment.

Gendarmerie officers did not search further and asked instructions from the local chief prosecutor’s office and the office of the governor of Hatay province. The local deputy chief prosecutor came to the parking lot where the truck was taken and gave instructions that it should be searched.

He was shocked to find that the gendarmerie had been instructed by the governor of Hatay, Celalettin Lekesiz, not to search the truck, ordering its release along with those detained.

Daily Radikal later obtained a photocopy of the governor’s written instructions in which he not only indicated that the truck belonged to the MIT, but threatened legal action against those who refused to let it go. The letter was dated Jan. 1, the same day it was revealed that Jaafari filed a complaint against Turkey at the UN Security Council.

The truck was subsequently released and allowed to continue to Syria, leaving behind a political carbon trail that has further embarrassed the government, given its insistence that Turkey was not sending military equipment to Syria.

The government’s reputation took another blow following media reports that the police officers who had initially stopped the truck had been dismissed and sent to other posts. It is noteworthy that the government did not deny the truck was carrying weapons. Instead, it tried to shroud the whole affair in mystery by claiming the matter was a “state secret,” which could not be revealed.

The only government official to speak about the affair was newly appointed Minister of Interior Efkan Ala. Asked about the incident following his Jan. 2 swearing-in at parliament, Ala said in a brief statement that the truck was carrying aid to Syrian Turkoman, adding cryptically that everyone should concern themselves with their own business. These remarks, which clarified nothing, merely fueled public speculation.

Many wondered what the government was trying to hide, if the aid said to be headed for the Turkoman, as Ala said, was innocuous.

When asked about the matter during a Jan. 3 press conference in Ankara, Bulent Arinc, deputy prime minister and government spokesman, said the interior minister’s remark should be considered sufficient.

The truck incident was not important enough for Erdogan to make it a key agenda topic at an emergency summit in Istanbul on Jan. 3, attended by the ministers of interior and justice as well as the head of MIT and the Istanbul chief of police. Erdogan was due to meet with a large number of senior journalists the next day, and it is expected this issue will be broached there.

Meanwhile, the head of the Turkish Islamic IHH Humanitarian Relief Foundation issued a statement on its official web page, denying media reports that linked it with the truck. The foundation said it would initiate legal proceedings against papers that claimed it was involved in this incident.

IHH was also behind the aid ship Mavi Marmara, which was boarded by Israeli commandos in May 2010 as it tried to break the Israeli blockade of Gaza. Nine Turks were killed at point-blank range by Israeli forces during the incident, which still rankles Turkish Islamists. Israel, for its part, has been trying to get the IHH listed internationally as a terrorist organization.

Hatay deputies from the main opposition Republican People's Party (CHP) are now calling for an official investigation into the truck incident. They want to establish what authority Hatay Governor Lekesiz had to prevent a state prosecutor from searching a truck, which was suspected of carrying illegal cargo into a war zone.

As if all of this was not bad enough for the Erdogan government, the BBC’s Turkish service reported on Jan. 2, that 11 aid groups working in Syria with the legitimate opposition are preparing to take Turkey to the European Court of Human Rights over its alleged supplying of weapons to radical Islamists in Syria.

The BBC report was based on remarks by Haytham Manna, one of the leaders of the Syrian National Coordination Committee, a liberal and secular anti-Assad grouping that opposes jihadists in Syria.

All this suggests that further hard times are ahead for Erdogan and members of his government, this time over the Syrian crisis, at a time when it is already faced with a very serious corruption scandal at home.