Celalettin Lekesiz, the governor of Hatay province, is now going public with the threats to Turkey from al-Qaeda and ISIS operations in Turkey and on the Turkey-Syria border. 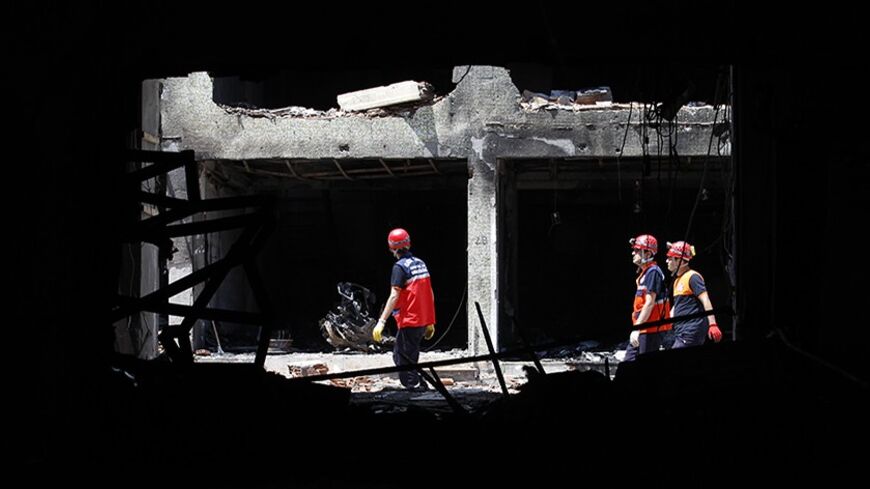 Search and rescue officers work at a damaged building at the site of the blast in Reyhanli, Hatay province, near the Turkish-Syrian border, May 14, 2013. - REUTERS/Umit Bektas

We used to have an "eternally denying governor" who dismissed every incident around the border by al-Qaeda and its derivatives. That governor is "gone" and the "new one" who on behalf of the state admits "the king is naked" is now on duty. But they are both the same man, Celalettin Lekesiz, the governor of Hatay province, who had been involved in covert operations along the border since the outbreak of the civil war in Syria. According to Lekesiz before his change of heart, armed people were never using the camps in Turkey, there were no briefing-orientation houses for al-Qaeda in the border region, it was of course impossible for illegal persons and weapons to cross the border and it was out of question for armed groups to threaten the people of the region. In a nutshell, according to that Gov. Lekesiz, all reports about the region were urban legends.

But in March, Lekesiz sent a report to his superiors in the Ministry of Interior and revealed the movements and plots of the Islamic State of Iraq and al-Sham (ISIS). Lekesiz, who in his report listed all the ISIS threats against Turkey, had a simple proposal to deal with the organization that, according to the daily Bugun, describes Turkey as a “regime of devils that has exceeded its limits.” Lekesiz proposed: "Let’s adapt the policy the United States followed after Sept. 11 and prevent the illegal crossing of militants to Syria."

This is what Lekesiz had to say about the al-Qaeda reality of threats and attacks against our border regions that the government had been dismissing as “the work of Assad.”

ISIS militants come to Istanbul by air. They know the phone numbers of people who will take them to Syria. They contact them immediately after reaching Istanbul. They are then taken by air or by road to Sanliurfa, Kilis, Gaziantep or Hatay to meet with local collaborators.

Lekesiz concluded: "If ISIS, which is gradually becoming a threat against our country, imposes control over Syria and dominates border areas, Turkey — which according to their [ISIS] beliefs doesn’t obey Islamic strictures — will be a target. It is strongly possible then they will launch attacks in Turkey.”

After the report became public, there were press reports that Lekesiz would be reassigned. Mehmet Ali Ediboglu, a member of parliament from Hatay, told Al-Monitor that Lekesiz had turned a blind eye to all illegalities for three years in tandem with the government’s policies and had covered up illegal actions despite his personal warnings as a politician. But there was a radical change in the equation after Prime Minister Recep Tayyip Erdogan targeted the head of the Constitutional Court, Hasim Kilic, who is known to be close to Lekesiz, who is now trying to exonerate himself by telling the truth. Lekesiz did not reply to Al-Monitor’s questions on the issue. His press adviser Vahit Harputluoglu did not deny or confirm, saying, "I am not in a position to comment."

The leaking of the Lekesiz report coincided with debates on the first anniversary of the Reyhanli bomb attack that killed 52 people on May 11, 2013. There are fears that the court case might be terminated. Although the government held the Assad regime responsible, ISIS had claimed credit for the attack. There are 33 defendants on trial, with 15 of them in detention.

The declaration by Tacan Ildem, the Turkish envoy to the Organization for Security and Cooperation in Europe, that the attacks were carried out by al-Qaeda elements was a striking admission, this time by a state official. As doubts grew about the case, there was a scandalous first session of the court where the date of the court sessions was not announced, the media were denied access to the court, identities of defendants were not established and indictments were not read out; the court responsible for trying the case became a mystery. The case was first seen in Adana and transferred to Antakya after closure of "specially authorized courts." Just before the second session on May 26, the Antakya court decided it had no jurisdiction over the case and returned the file to Adana.

It is understandable for the state to complicate legal proceedings related to the Reyhanli bombing and also the sarin gas case in Adana, which may shed light on the government’s controversial Syria policy. The question we don’t get answered is why the government doesn’t or can’t sever the logistics flow from Turkey. Up to a point, that could have been because of the conviction that Assad would be overthrown and these undesirable elements where catalysts of the revolution. Now although the government appears to be more selective in its dealings with armed groups, it still maintains its “open borders” policy because of al-Qaeda threats.

Ediboglu, who has documented loose border controls with his camera several times, believes this: “The blasts at Cilvegozu and Reyhanli and bomb-laden vehicles that have been found are the proofs of al-Qaeda’s threat. You will remember that while all countries supported the Geneva process, it was rejected by Qatar and Turkey. Hatay is being monitored by foreign agents who don’t trust our personnel. It was the foreign intelligence agents who reported the trucks used by our National Intelligence Service [MIT]. Qatar buckled under US pressure but Turkey continues to resist. This is because of ISIS threats. After killing our soldiers at Nigde they bragged about it as a blessed deed and wanted to do something similar in Hatay. Why are they issuing threats? Because they need ammunition. They don’t get as much assistance as before.”

Ediboglu went on: "Incidents such as the discovery of the MIT trucks weakened the [Syrian] opposition. They accuse Turkey of reassuring them and then abandoning them half way. Our people want to continue assistance but some don’t want it, hence the increase in threats. This is why Turkey is on alert. The state is trying to locate ISIS militants and deport them. Also don’t forget they have a working commercial enterprise. They want to keep that going. They make about $350 million annually from Rimelan oil. They refine the crude oil in villages under ISIS control. They carry 60,000 barrels of oil to Hatay every day and sell them to Turkey. Turks are only consumers. Those running the operation on the Turkey side are also ISIS militants. You know most villages of Hatay earn their living from trucking. Now fuel is delivered to their doors. They would like to keep it that way.”

There is varying information on al-Qaeda militants captured and deported. Today, more than 4,000 European militants are on Turkey’s black list because of the pressure of Western allies. To date, more than 500 of them have been deported.

All this still doesn't clear the fog over Turkey’s border policy. Only thing that is obvious is Turkey’s uncomfortable position between the aggressively threatening ISIS and European allies afraid that these militants will go back to hit their own countries.