Turkey is increasingly identified as a country facilitating radical forces in Syria, and thereby isolated among its allies. 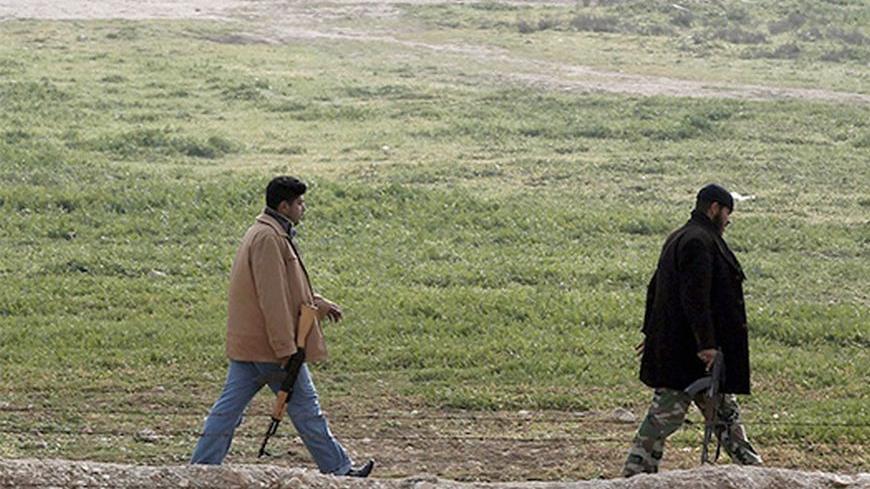 Members of the Free Syrian Army patrol in the northern Syrian town of Ras al-Ain as they are pictured from the Turkish border town of Ceylanpinar, Sanliurfa province, Jan. 26, 2013 - REUTERS/Osman Orsal

First there was the report by Human Rights Watch alleging that the massacres of Alawites in the Syrian regime-controlled Latakia area were carried out by Western-supported opposition groups crossing the Turkish border, and then there was the article in the Wall Street Journal that Hakan Fidan, the chief of Turkey’s National Intelligence Organization [MIT], has been working as a "traffic cop" directing weapons shipments. This has pasted on Turkey the label of being "the country nurturing al-Qaeda linked groups." Of course, the government totally denies the charges.

What is going on around the border offers us a different view. A reliable source who works on humanitarian relief at the border told me: "Some time ago, 160 fighters were brought to Mersin port in a ship from Yemen. They were transported by buses to the Oncupinar border crossing. From there, a call was made to the commander of the Free Syrian Army [FSA]. When he came, there was bargaining and the middleman asked for $2 million for recruiting and transporting these fighters. Phone calls were placed to Saudi Arabia and the requested amount was transferred to a bank. Then the fighters crossed the border at Oncupinar to Syria’s Selame."

To be honest, we cannot fully verify the report, but similar stories circulate in the cities of Hatay, Sanliurfa, Kilis and Gaziantep. Nobody is surprised by them.

Hatay MP Mehmet Ali Edipoglu of the main opposition Republican Peoples Party [CHP] is one the best monitors of border traffic. He referred many incidents as queries to the parliament. The government, however, instead of responding to Edipoglu’s queries, countered with questions about his reliability. Edipoglu is overflowing with such reports. When I called for Al-Monitor he told me:

"On Aug. 14, 2012, the Libyan fishing boat Al Entisar docked at Iskenderun port and declared humanitarian relief supplies as its cargo. Twenty-four Libyan nationals disembarked and left in the direction of Antakya in a bus with plate number 31 S 4262. I called the director of security and asked him to stop the bus. It was stopped at the entrance of Antakya and the police told me there was nothing they could do because there were no weapons in the bus. The bus reached Antakya and its passengers checked in at the Buyuk Antakya Hotel. The boat sailed away without its passengers.

"On Dec. 7, 2012, at 11:50 p.m., a nonscheduled Anadolu Jet flight landed at Hatay Airport with 200 Arab-speaking people. Fifteen minibuses were allowed to enter the apron and collect the 200 people from the plane’s stairs. Tens of Arabic-speaking people daily arrive at Hatay airport from Istanbul and Ankara. They are not Syrians. They are between 20 to 30 years of age and most of them use VIP facilities. They can’t all be diplomats. I query as an MP and the airport officials tell me, ‘We have orders from the Foreign Ministry and the Prime Minister’s Office.’ Their numbers are fewer now. It used to be 50 to 100 a day."

The turning point for Turkey becoming a party to the uprising next door was its hosting of the Syrian National Council and FSA, and opening of the Apaydin Camp exclusively for former soldiers of the Syrian army and their families. There were allegations for some time that the FSA was using the camp as headquarters. A parliamentary delegation determined that the camp was not used for military training.

Edipoglu referred to camps other than Apaydin: "The Soil Products Office [state-owned] next to the stadium at Reyhanli is where radical Islamists are trained, armed and shipped to the border. That office has at least 10 acres of land. You can’t see inside because of high walls. Everybody speaks of Apaydin camp but the real headquarters is here. Logistical support is provided from there, fighters are put on buses at night and escorted by police to Kusakli and Bukulmez to cross into Syria.

"Until a year ago, jihadists used to be accommodated in Antakya. For example, at North Hill Hotel at Kuzeytepe; Ottoman, Buyuk Antakya and Narin hotels in Antakya. At that time, the fighters were transferred to Syria via Guvecci village of Yayladag town. There were intensive efforts to capture the Yayladag border crossing. They attacked three times in one week but couldn’t do it because Armenians and Turkmens live in Keseb on the Syrian side, and they did not help the opposition attackers. The opposition, however easily took over the Cilvegoz crossing because they attacked it from two flanks.

"When they failed at Yayladag and the people of Antakya began to react, fighters were shifted to Reyhanli and that is when the Soil Products Office became their base. They also rented hostels and homes in Reyhanli. There are about 3,000 to 5,000 radical elements in Reyhanli. Since the Cilvegozu crossing is observed more carefully nowadays, they are now mostly using the road through Bukulmez village. They removed the barbed wire and improved the road. They had earlier paved the illegal road used by smugglers at Yayladag Guvecci. They are now easily crossing in front of the Bukulmez outpost. Military officials say, 'Don't ask us, ask the governor.' The governor says, 'Nothing of the sort is happening.' As an MP I can’t get any answers."

About weapons transfers, Ediboglu says: "They load their cargo in Ukraine, showing Egypt as their destination port. Instead, they come to our Iskenderun and unload the weapons."

It is this abnormal situation at our border that dragged Turkey into the Syrian crisis.

Many news reports were published on Turkey’s role in weapons shipments to the opposition, as well as the border crossings of militants and non-lethal assistance. A most significant report appeared in The New York Times of March 24, 2013. The shipments had intensified particularly at the beginning of 2012. Weapons shipments began with the landing of two Qatari C-130 military cargo planes in Istanbul.

Between April 26 and May 4 six more Qatari planes landed at Ankara’s Esenboga airport. This flow continued in succeeding months. In November 2012, Jordanian military planes entered the line as well. According to air traffic records, in 2012 Qatari, Saudi and Jordanian cargo planes landed 160 times at Esenboga airport. The CIA, which organized procurement of weapons from Croatia with financing from Gulf countries, was managing the traffic with Turkey. Hugh Griffiths of the Stockholm-based International Peace Research Institute estimated that 3,500 tons of military equipment had reached Syria via Turkey. Reuters reported that Saudi Arabia, in cooperation with France and Britain, had begun delivery of European-made shoulder-fired missiles to the FSA via Jordan.

Although American officials kept saying the CIA’s role was "to prevent radical groups getting their hands on these weapons," it is hard to say that a real distinction was made between the groups until al-Qaeda-linked Jabhat al-Nusra was placed on the American terrorist list.

Even if there were true concern, it was not a secret that it did not really help in practice. Weapons delivered to FSA are changing hands either through "sharing ammunition in operations" or by sales. For example, an FSA official told The Daily Star how the European-made anti-tank missiles were going to Jabhat al-Nusra: “Saudi Arabia supported FSA with anti-tank weapons costing $5,000 each. In couple of days, Jabhat al-Nusra paid $15,000. In short, weapons come and are sold instantly."

Gradually, groups deemed by Western allies as “supportable moderate organizations" became al-Qaeda’s partners in the field. Among 13 organizations that on Sept. 24, 2012, declared that they no longer recognize the Syrian National Coalition and called for unity based on Sharia included, along with Jabhat al-Nusra, the Western-supported Tawhed Brigade, Shour as Sham and Islamic Brigades. These three outfits, which saw no impediment to operating with al-Qaeda after giving up hope of a Western military intervention, were actually part of the FSA Supreme Military Council formed at Antalya in December 2012.

Turkey has come to a crossroads. But it is not as easy for Turkey to distance itself from these developments as it is for the United States, France and Britain. The organizations operating in Syria are now our border neighbors. Turkey now has to deal with a serious boomerang because of them. Turkey’s real test is just starting.