Turkey has closed its gates after al-Qaeda captured three border crossings into northern Syria, with potential implications for armed groups operating in Syria. 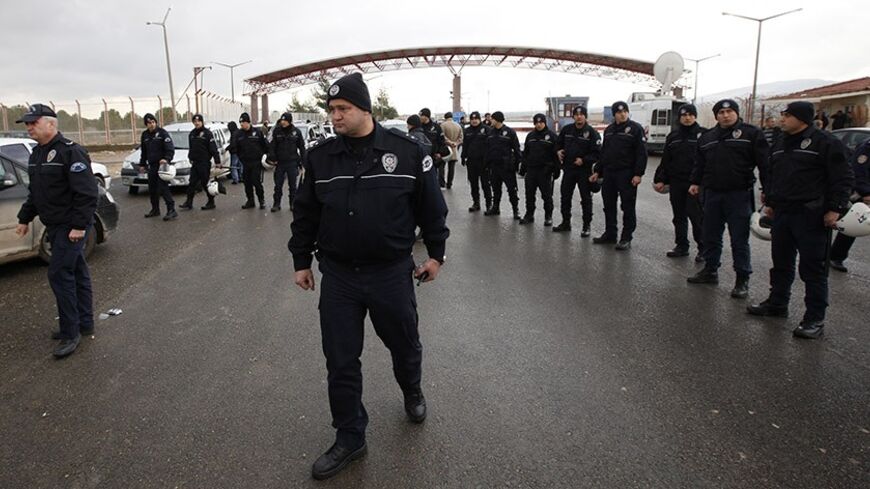 The turmoil on the Turkish border is likely to intensify following major operations by the Syrian army in Aleppo and Idlib. The regime's move pushed opposition forces northward against the border and prompted infighting between them. At the moment, the Turkish border, already the scene of crucial developments because of crossings of refugees, militants, arms and ammunition as well as traditional smugglers, had become even more volatile because of the clashes between the Islamic Front and the al-Qaeda-affiliated Islamic State of Iraq and al-Sham (ISIS).

The Syrian border crossings of Bab al-Salameh, Carablus and Tal Abyad, which face the Turkish crossings of Kilis-Oncupinar, Gaziantep-Karkamis and Sanliurfa-Akcakale, respectively, were captured by ISIS one after the other. When Turkey closed the crossings because of this development, the trucks waiting there to cross into Syria were diverted to the Cilvegozu border crossing at Reyhanli-Hatay. But after the Jan. 20 car-bomb attacks at Syria’s Bab al-Hawa facing Cilvegozu, Turkey closed this crossing as well. The queue of trucks waiting at Cilvegozu was 30 kilometers (19 miles) long on Jan. 22. Only Syrians wanting to go back to their country are allowed to cross.

A senior official told Al-Monitor that although Bab al-Hawa is technically under the control of the Free Syrian Army (FSA), ISIS has a presence in the area and passages are therefore risky. He said, "There was stiff opposition to al-Qaeda at Tal Abyad, which is across from our Akcakale border crossing. But when al-Qaeda got the upper hand in the clashes, FSA people manning the crossing abandoned their weapons at the border and escaped to Turkey. Turkmen villages in the area were evacuated. At the moment, there is no force other than al-Qaeda at Tal Abyad. That is why we had to seal off the Akcakale border crossing. Three hundred trucks a day used to pass through that crossing. Now the owners of the Akcakale-based truck fleets have formed a pressure group and they want us to reopen the crossing. They say they have commercial obligations and they have to deliver. According to them, al-Qaeda has transferred control of the crossing to civilians. Turkey is now assessing the situation but if you ask me, to allow trucks to cross from there would only benefit al-Qaeda because although ISIS may have withdrawn, it is al-Qaeda that actually controls the crossing."

The official continued, "There was a long clash at Carablus about a week ago. In the end, the Tawhid Brigade gave up and ran away. About 1,500-2,000 civilians living in tents near the border also crossed into Turkey. These were people who had escaped from clashes at Hama and Homs. Most of them are Turkmen. Turkey was keeping them in camps on the Syrian side instead of letting them cross into Turkey. But when the border was closed, humanitarian assistance was disrupted and Turkey had to accept these refugees."

He concluded, “There were bomb attacks in the town of Azez across from our Oncupinar. At Bab al-Hawa across from Cilvegozu, control is in the hands of the Islamic Front.”

One can sense a martial command in the region, especially to the east, where the Kurds are. The Nusaybin, Senyurt and Ceylanpinar crossings that provide access to Qamishli, Derbesiye and Serekaniye are controlled by the Kurds and already are closed. According to the official who spoke to Al-Monitor, vehicles going to Qamishli are processed at the Habur border crossing. At Senyurt, humanitarian assistance trucks are occasionally allowed through. That Turkey erected a wall at Nusaybin to prevent illegal crossings was interpreted as enmity toward Kurds and a challenge to Kurdish efforts to set up an autonomous region in Rojava.

The official said it is impossible to prevent illegal crossings on a border of 910 kilometers (565 miles), but the least Turkey could do would be to devise policies that would discourage the villagers on the Turkish side from joining the smuggling enterprises common there.

Another reason for Turkey’s increased vigilance on the border is the intelligence gathered on al-Qaeda’s intentions to stage attacks in Turkish cities. The latest report reaching the security units concerned ISIS plans to launch suicide attacks in Ankara, Istanbul and Hatay.

Intelligence reports said ISIS was specifically targeting the big hotels where the FSA and the Syrian National Coalition hold their meetings, hence the urgent warning sent to police and the gendarmerie. Turkey’s support of the Islamic Front, which is now fighting ISIS, and the recent detentions of al-Qaeda militants in some cities have increased fears that Turkey itself may be targeted.