Guns, people and stolen goods move with surprising ease and regularity over a sensitive border. 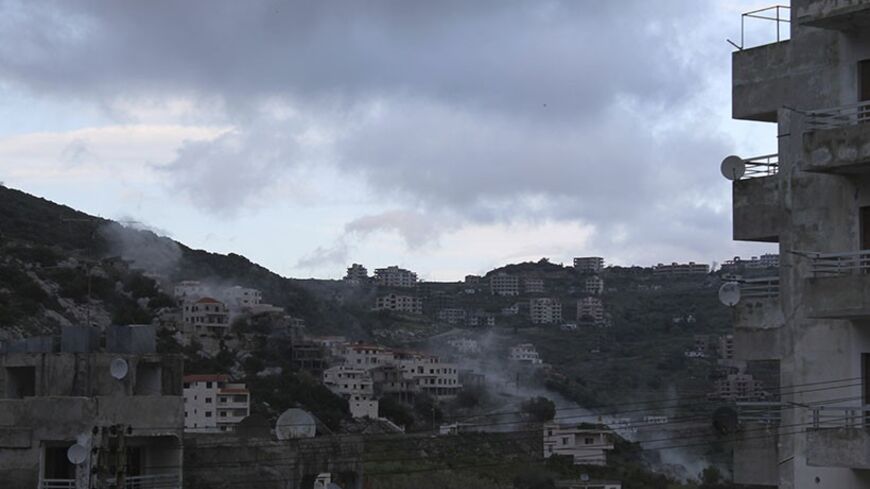 Smoke rises after what activists said was shelling by forces loyal to Syria's President Bashar al-Assad in Kassab, April 7, 2014. The fighting that has brought fear to Latakia started when rebels moved in from Turkey and seized the border crossing at Kassab, the last crossing point from Turkey into government-controlled territory. - REUTERS

“Multidimensional” is a term the Turkish government loves repeating to inflate the wisdom of Turkey’s foreign policy. Its applicability to other fronts may be debated, but it surely prevails along the 910-kilometer (565-mile) border with Syria.

Gates open and close at the whim of the opposition groups that control them and remain locked if controlled by Kurds. States legitimize illegal activities under the cloak of reinforcing the opposition in the Syrian civil war but dig trenches to prevent "undesirable illegal crossings" and erect movable concrete walls. Armies of smugglers, depending on their connections, are either given free rein or caught in the act, and refugee camps are set up right on border firing lines. As if the 10- to 15-kilometer (6- to 9-mile) deep buffer zone created by the new rules of engagement was not enough, we now have a point-zero the opposition uses to fire its mortars. Syrian radars lock on to Turkish F-16s while preventing Syrian planes from coming near the Turkish border, and trucks cross the border with mysterious loads.

Not a day passes without some incident occurring that is reminiscent of colorful western movies. If you want to see how unconventional life can be along the border, all you need to do is glance at the daily incidents reported on the Turkish Armed Forces' website.

Border crossing statuses offer a true spectacle of the reigning unconventional way of life while also reflecting the fragmentation of Syria's civil war:

Kassab: The city was captured by a coalition of jihadist Salafist forces with their March 21 Anfal operation. It was the only border crossing properly operating under the Syrian regime's control. Turkey closed its side of the border in May 2013. The coalition force that captured Kassab, after crossing into Syria from the Turkish border town of Yayladag, includes Ahrar al-Sham, which is a part of the Islamic Front, and the al-Qaeda-affiliated Jabhat al-Nusra Front and Suqour al-Izz.

Bab al-Hawa: Bab al-Hawa, which is opposite Turkey’s Cilvegozu crossing in Hatay province, came under the control of the Islamic Front in January 2012. The Tawhid Brigade is the dominant force. This is the most important supply route still open, though it closes temporarily when clashes break out. According to news reports, goods looted from factories in Aleppo are smuggled through this crossing.

Bab al-Salameh: Since March 2014, Bab al-Salameh, which is opposite the Oncupinar crossing of Kilis, has been under the control of groups within the Islamic Front led by Ahrar al-Sham. For a while it was controlled by the Islamic State of Iraq and al-Sham (ISIS). It plays a critical role in the passage of commercial goods and people.

Jarablus: Jarablus faces the town of Karkamis in Gaziantep province. It has been under the control of ISIS and is currently closed.

Ain al-Arab (Kobani): This town faces the Mursitpinar crossing of Sanliurfa-Suruc. Since July 2012, the crossing is under the control of the Kurdish People's Protection Units (YPG) of Rojava. This gate has been closed since 1970, but currently, it is occasionally opened to allow the passage of humanitarian supplies and the evacuation of wounded individuals.

Tell Abyad: This gate, which faces the Akcakale crossing of Sanliurfa, has been under ISIS control since January 2014 and is now closed.

Ras al-Ain (Serekaniye): This crossing is opposite Sanliurfa’s Ceylanpinar crossing. It has been under YPG control since November 2012 and was closed in 1999. In 2012, it was opened for the crossing of refugees, but since it came under Kurdish control it has remained closed, even for humanitarian assistance crossings.

Darbasiyah: It is opposite Senyurt and has been officially closed since 1953. It is controlled by the YPG.

Qamishli: Directly opposite the Turkish Nusaybin, it is under the control of the Syrian army, but since Qamishli is partially controlled by the YPG, this crossing is closed. Turkey — at the risk of angering its own Kurds — has been erecting a wall along this segment of the border since November 2013. In March 2014, a UN relief convoy was allowed to cross.

In short, three gates are controlled by the Kurdish YPG, three by the Islamic Front and its allies, two by ISIS and one by the Syrian state. In general, if the Kurds or ISIS control the gates, they are closed. If they are in the hands of the Islamic Front, they are open except during clashes. The rigidity against the Kurds emanates from Turkey’s classic official Kurdish phobia. The same rigidity is also enforced against ISIS due to foreign pressure.

The puzzle of resupplying the Tomb of Suleiman Shah

The most striking border developments of late include: the opening of the Yayladag border crossing to armed groups involved in the Anfal operation to capture Kassab; erection of a removable concrete wall at Kusakli; and the Turkish army's resupply operation of the Tomb of Suleiman Shah, which is considered Turkish territory inside Syria.

An 18-vehicle convoy was dispatched to the Tomb of Suleiman Shah to rotate the troops and resupply. The convoy entered Syria from the YPG-controlled Kobani and returned via ISIS-controlled Jarablus. A Syrian Kurdish source told Al-Monitor that, as per the accord reached with the officials of the “Kobani canton” who recently visited Turkey, the YPG provided security to the Turkish army convoy while passing through Kurdish-controlled area. According to this source, the convoy was stopped by ISIS in Cadde village, three kilometers [two miles] from the tomb, after it left the Kurdish area. Since official sources kept mum on what transpired at Cadde and along the way, speculation grew.

There were unverified claims of ISIS refusing to allow the passage of the convoy, taking soldiers hostage and hoisting its flags on Turkish military vehicles. The only confirmed information was the convoy traveling 35 kilometers (22 miles) from Kobani to the tomb and having to use another route to return. The convoy, under pressure from ISIS, had to extend its route by 100 kilometers (62 miles) to get to Jarablus via Menbic and reach Turkey's Karkamis crossing. While ISIS was uploading photos of the convoy online, the Turkish army issued a statement April 28 rebutting the claims. It read: "Resupply and personnel rotation is a routine operation carried out every three months. For the convoy’s trip to the outpost and its return, different routes were used. The routes followed are controlled by different groups. After completing its resupply and troop rotation operations, the convoy returned safely to Turkey on the same day."

Faruk Lologlu, the vice chairman of Turkey's main opposition Republican People's Party (CHP), said that sending the army convoy through a corridor where ISIS flags were flying was a shame, and the government was responsible for reaching this point. The army, which was forced to coordinate with the YPG and ISIS, was monitoring the clashes in the area around the tomb from its Gokturk-2 satellite.

Smuggling is another activity that makes the border as colorful as it is bizarre. While armed groups received logistics support from the Turkish border, smuggling reached incredible dimensions. Oil once smuggled out by hundreds — even thousands — of people in barrels is now smuggled out via plastic pipelines laid across the border. Reports of Turkish soldiers thwarting smugglers by opening warning fire, or the discovery of newly laid plastic pipelines, has become routine.

A buyer of smuggled oil in Hatay explained to Al-Monitor how it works: "At night, I take my vehicle to the border. A smuggler liaison on the Turkish side sends flashlight signals to the Syrian side to open the valve. After they fill me up, he again signals across the border to turn it off. Sometimes, because of communication lapses, oil spills happen, but they don’t care."

In a nutshell, some have turned the "open door policy" for Syrian refugees into an "open borders policy" for the smuggling of people, guns and commodities. When the affair got out of hand, the Turkish government began to erect concrete T-walls — three meters (10 feet) high, 30 centimeters (a foot) thick and weighing three tons each — at the focal smuggling point of Kusakli in Reyhanli. This removable wall will be 1,200 meters (three-quarters of a mile) long in its first phase and will eventually reach 8 kilometers (5 miles). There are doubts as to whether this measure will be effective.

Another absurdity along the border is the smuggling of cars stolen in Turkey to Syria. The Association for Tourism Transport and Boutique Hotels said, “Since the outset of the civil war in Syria, 5,000 vehicles worth $250 million were smuggled to Syria.” It would be impossible for this activity to continue without the involvement of the organizations controlling the crossings.

Our border resembles everything but a border. Can you put it into order by putting up walls? Those who are aware of the rewards of illegal, offbeat operations along the border only smile.