The latest chemical-seizure incident is drawing attention to lax control of Turkey’s border. 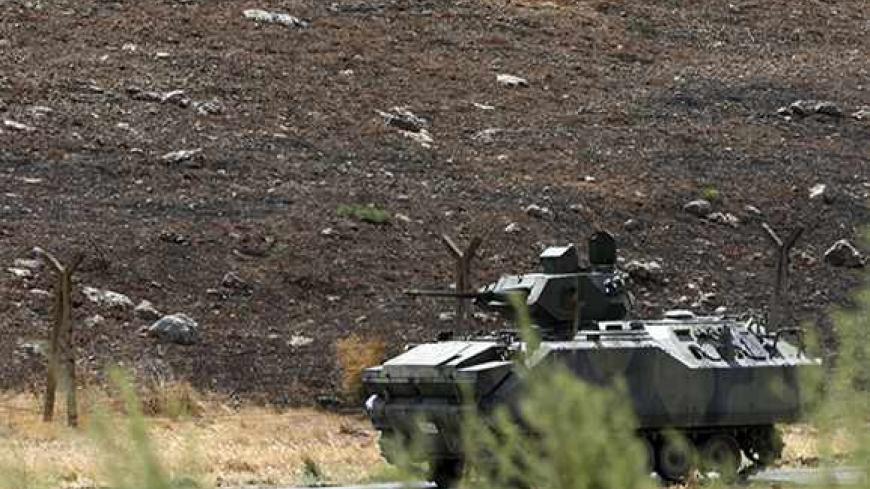 Turkey, which has adhered to an "open border" policy for the Syrian opposition forces since the eruption of the civil war in Syria, has finally started to take some visible measures along its border after accusations of being the “country that allows passage to al-Qaeda." One of those measures is the wall being erected at Nusaybin. This barrier, already labeled “the wall of shame," is actually targeting not al-Qaeda, but the Kurds who are fighting Jabhat al-Nusra and the Islamic State of Iraq and al-Sham. Another measure of note has been the increasing control of border crossings by the Turkish army.

Although the government is saying it is not helping al-Qaeda, it is a bit early yet to talk of a drastic move such as cutting assistance to opposition groups. At least the Turkish military command’s announcements on its website show that the military is taking some concrete steps. Although most of the announcements are about intervening in massive smuggling operations involving hundreds of smugglers and escalating fire on Turkish military vehicles out on intensified patrols, information about a Nov. 2 incident was particularly critical.

The Turkish army had seized some chemicals being smuggled into Syria from Hatay. According to the military command's announcement, military units forcibly stopped three vehicles that ignored instructions to halt by firing at their tires as they attempted to cross into Syria from Narlica township in Hatay province. Twenty sacks, each filled with 50 kilograms of sulfur, and eight barrels with sealed lids were found in the vehicles. The sealed barrels were sent to the chemical, biological, radiological and nuclear teams of the Disasters and Emergencies Directorate. Most of the occupants of the vehicles escaped to Syria on foot, but one was apprehended. "SH," a French national with Bosnia-Herzegovina citizenship, said he had nothing to do with the seized supplies and was released pending trial. Cahit Dogan, the press adviser of the Hatay provincial government, responded to an Al-Monitor question about the fate of the chemicals with, “We don’t yet have information about that.”

The incident was important both for highlighting the lax supervision of the border and for potentially implicating Turkey in the Syrian chemical-weapons debate. It is highly probable that the case will be reduced to “just some sulfur,” as happened with the release of the suspects implicated in the seizure of chemicals used for manufacturing sarin gas on May 28 at Adana. Five Turkish nationals on trial for charges of providing chemicals to Ahrar ul-Sham and Jabhat al-Nusra used to produce chemical weapons were released on July 17 pending trial. The only detained suspect, Syrian Hytham Kassab, alias Abu Salah, was released Oct. 30. Kassab, who did not deny his affiliation with Ahrar ul-Sham, said the chemicals were wanted not by al-Nusra, which is on the US terror list, but by the Free Syrian Army.

Main opposition CHP parliamentarian Hursit Gunes, who has been following the trial, told Al-Monitor that the government wants the case to be closed. He said Halis Yetkiner, the lawyer of the accused Halit Unalkaya, was the former chair of the Yuregir town’s local Justice and Development Party chapter. Gunes quoted Yetkiner as telling the court, "This is not a legal but a political case. It is a case that could damage Turkey’s relations with the outside." The lawyer said the indictment spoke of the possibility of the use of the seized chemicals in production of chemical weapons. He added, "In the indictment, it is clear that what is being stated is preparation for possible action. Preparation cannot be classified as a crime." Gunes said before the trial lawyer that Yetkiner had told him that Hytham Kassab is also to be released.

Some time ago, three pickup trucks laden with chemicals that were procured at Turkey’s Bursa and smuggled into Syria were seized by President Bashar al-Assad’s forces at Latakia. Gunes noted that during the trial, a relationship between Kassab and Abu Walid Tammam, who had organized the transfer of chemicals from Bursa, was established.

Although the indictment said the suspects were trying to procure 10 rolls of dynamite fuse from the official Mechanical Chemical Industry Corporation to take to Syria, the judge did not even refer to this information. Gunes said from the progress of the trial he had the impression that the file will be closed.

“But the public must be informed," he said. "The file should not be closed. Discovering chemicals on Turkey’s borders is significant. Why is there frequent seizure of chemicals? Why the public is kept in the dark?”