Court documents reveal that last year, when the Syrian opposition captured the Armenian town of Kassab, the Turkish army shelled the Syrian army. 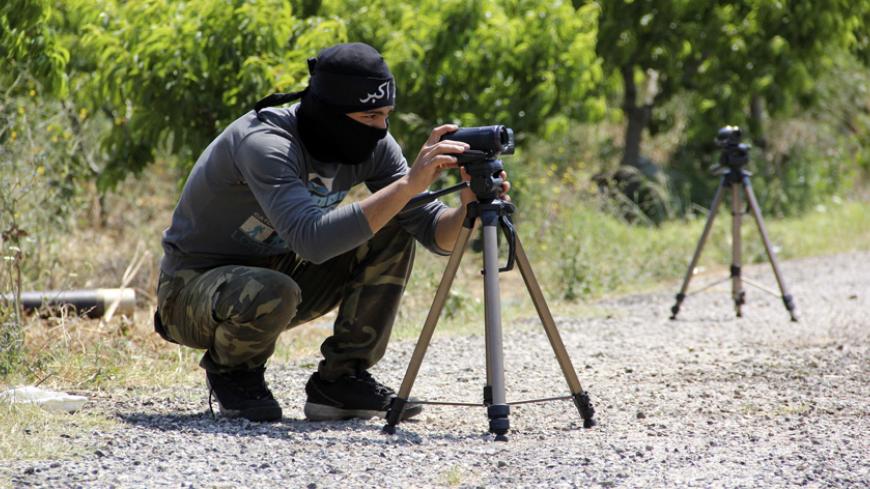 A rebel fighter prepares cameras ahead of firing mortars toward forces loyal to Syria's President Bashar al-Assad in the village of Tshalma near the Armenian Christian town of Kassab, May 26, 2014. - REUTERS/Alaa Khweled

Media reports based on eyewitness and opposition sources saying that Turkey has become a party to the civil war in Syria have found their way into court proceedings. During the trial of the Islamic State (IS) militants who attacked Turkish security forces at Nigde last year, court files revealed that Turkey, beyond supplying opposition forces with weapons and ammunition, had also given artillery support to the opposition groups that captured Kassab. The prosecutor obtained striking admissions by tapping the defendants’ phones. According to documents obtained by Ahmet Sik of Cumhuriyet, the wiretapping transcripts reveal that the opposition forces at Kassab inform people in Turkey of the coordinates of Syrian army positions around Kassab, and then Turkey shells those locations.

In addition to armed Turkmen groups, al-Qaeda’s Syrian affiliate Jabhat al-Nusra, the Islamic Front’s most prominent group Ahrar al-Sham, IS-affiliated Shukur el-Izz, Sham el Islam (established by former Guantanamo prisoner Moroccan Ibrahim Binshekrun) and Ansar al-Islam, which has links both to al-Qaeda and IS, took part in the operation to capture Kassab. As clashes continued around Kassab on March 23, a Syrian warplane was shot down by a missile fired from Turkey for violating Turkish airspace. In June 2014, when President Bashar al-Assad’s army recaptured Kassab, including the high ground known as Feature 45, the Turkish army fired on the Syrian side. The Turkish government and military persistently said all firing on Syria after the changed rules of engagement following the shooting down of the Turkish jet were in retaliation for border violations on the Turkish side. The Turkish Foreign Ministry rejected the accusation, saying, “All claims that Turkey has been supporting the opposition forces by allowing them to use Turkish territory or in any other way are totally baseless.”

The information collected from the Nigde assailants’ tapped phones contradicted official statements. According to the recordings, Adil Orli, the commander of the Bayir Bucak Turkmen Front, sends the coordinates through his brother Ayhan Orli to Mehmet Toktas, the president of the Yayladag Youth Association. In a conversation on June 7, Ayhan Orli reports that he had sent via WhatsApp the coordinates of seven targets he had received from Adil Orli. He says, “Firing was useful. Our friends solved the rest of the problems. But there are still seven locations. If you fire once on each, that will be enough.”

Toktas answers, “Seven locations OK. Tell everyone to stay on defense in the coming moments.”

The two also talk of military assistance. Orli complains of a shortage of ammunition. Toktas says, “Let me talk to Ankara once more to see what is happening. Without ammunition, nothing can be done.”

In a conversation on June 14, someone called Yasar Benli asks Ayhan Orli to arrange for the shelling of the Syrian regime’s units deployed around the cell towers on Feature 45. A short time later, Ayhan Orli tells Toktas, ”There are many soldiers on Syriatel Hill. It will be good if you can hit them.” He gives a description of the target.

On June 13, a Turkmen from the front line asks Ayhan Orli to help some surrounded fighters cross into Turkey. Orli calls sub-governor of Yayladag, Turan Yilmaz.

Yilmaz:  Will they cross from near 45?

After the court documents became public, Turan Yilmaz said, “We acted according to directives.”

Main opposition Republican People's Party deputy Umut Oran brought the issue of the Turkish army’s artillery support to the parliament and asked Prime Minister Ahmet Davutoglu, "Why did the Turkish army open fire on an area in Syria for no apparent reason? Doesn’t this put Turkey in a position it can’t explain and rectify?”

Weapons did not go to Turkmens, but to Ansar

The court documents contain remarks that reinforce suspicions about Turkey’s help to radical groups in the form of arms shipments. In a conversation between Ayhan Orli and President of the Syrian Turks Association Ahmet Sirin (alias Ahmad Ohrin), they say weapons sent from Turkey have actually gone to Ansar al-Islam.

Ansar al-Islam generally operates jointly with Jabhat al-Nusra. When Orli says they have run out of ammunition, Sirin asks, “What happened to those weapons that have gone to Ansar?” Orli replies, “I don’t know. You have to ask those who delivered the weapons to Ansar."

In another conversation on June 14, when Orli was saying that the situation at Kassab was not going well, Bayir Bucak Brigade Cmdr. Col. Ahmed Arnavut (alias Aziz Kikhia) asks, “Where are those guys who received the trucks? Orli says, "They are not around."

The same day, Orli complains of an ammunition shortage to Samir Hafez, the general coordinator of the Syrian Turkmen Groups. Hafez says, “We haven’t received anything for a year. You think it will come now?” Orli retorts, "You mean, we are up for sale?”

The issue of weapons assistance to Turkmens found its way to the national agenda when three trucks loaded with rockets were stopped at Adana. According to the deposition of one driver, the trucks, which belong to Turkey’s National Intelligence Organization (MIT), were to enter Syria through the Cilvegozu border crossing. Bab al-Hawa, opposite Turkey’s Cilvegozu gate, is controlled by the Islamic Front and Jabhat al-Nusra. But the Turkish government insists the assistance was going to Turkmens.

Topalca: A Turkmen laden with secrets

Al-Monitor had access to information about arms shipments in the documents about the Nigde incident. Defendant Mehmet Askar explains that weapons are illegally shipped to Syria on behest of MIT. Askar says that together with Syrian Turkmen Heysem Topalca, said to be working for MIT, he was caught by Turkish soldiers while moving weapons to Syria, but after a few phone calls they were let go and delivered the weapons. Topalca, who was also detained in connection with 953 warheads found at Adana, was then released.

Topalca is among those accused of arranging the escape of the Nigde assailants to Syria. Topalca’s name is also in the investigation file of the May 11, 2013, twin car-bomb attack in Reyhanli that killed 52 people. In the indictment that referred to a June 9 report by the Gendarmie General Command, it is stated that Topalca was caught with warheads, that he smuggles historical artifacts from Syria to sell in Turkey, that he is a regular supplier of ammunition for al-Qaeda and Jabhat al-Nusra and that he had provided the vehicles that exploded at Reyhanli. The prosecutor, citing other evidence, charged Topalca with being the one who organized the Reyhanli car bomb attack and that he has links to the Jund al-Sham organization.

Topalca and the Orli brothers have practically become the black box of secret schemes with Syrian Turkmens. But that is not all. Turkey’s connections with the Turkmens, who are fighting the Syrian regime under the Yavuz Sultan Selim Brigade, the Faith Sultan Mehmet Brigade, the Sultan Abdulhamid Brigade, the Omer Muhtar Brigade and Ricalullah are frequently reported on. The last report read that the Osman Gazi, Omer Bin Abdulaziz and Omer Muhtar units, which have been fighting in the rural Latakia region, have united to form the Sultan Abdulhamid Khan Brigade. There was even a Turkish video made of the ceremony.

As the Syrian army increases its pressure in the Latakia area, the number of Turkmens calling for more help from Turkey will continue to increase.