Should US back UN plan for cease-fire in Aleppo?

UN Syria envoy says that "assurances will not be enough" to end fighting; Turkey’s border a "strategic problem" in anti-Islamic State campaign. 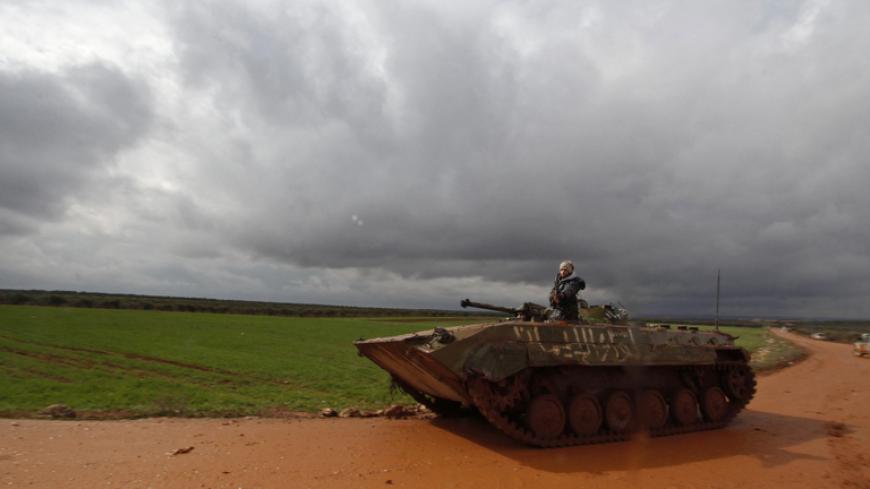 Rebel fighters of al-Jabha al-Shamiya (the Shamiya Front) sit in an armored vehicle along a main road between Raitan and Bashkuwi villages, north of Aleppo, Feb. 19, 2015. Battles in and around the Syrian city of Aleppo have killed at least 70 pro-government fighters and more than 80 insurgents after the army launched an offensive there, a monitoring group said. - REUTERS/Rami Zayat

De Mistura: "no illusions" about challenges ahead

UN Special Envoy for Syria Staffan de Mistura told the UN Security Council on Feb. 17 that there was a “glimmer of hope” as the Syrian government said it would be willing to halt aerial bombing and artillery shelling of Aleppo for a period of six weeks.

De Mistura added that he has "no illusions" about the difficulty of implementing a freeze. “We shall be cautious with words. Assurances will not be enough. Facts on the ground will prove if the ‘freeze’ holds and can be replicated elsewhere,” he said.

Khaled Khoja, president of the National Coalition of Syrian Revolutionary and Opposition Forces, was skeptical. “The past four years have revealed the regime’s goal behind these local truces, which is to gain more time and escalate attacks on the rebel-held areas,” Khoja said Feb. 19.

But Khoja did not outright reject the initiative either. “We welcome any effort aimed at stopping the bloodshed in Syria,” he said. The UN envoy’s "freeze" proposal “requires a careful and detailed study, and that stopping aerial bombardment must include all Syrian cities, and that there must also be an end to killing on the ground.”

Meanwhile, both Syrian government and opposition forces intensified their military operations around Aleppo. Mohammed al-Khatieb reports that as a result of the fighting, civilians have vacated parts of Aleppo to take residence in Kurdish-controlled areas such as Sheikh Maksoud, though they may not stay safe for long: “Sheikh Maksoud, located in the northwest of Aleppo, is considered a safe haven for the displaced. Arab and Kurdish families alike go there to escape the shelling in the eastern neighborhoods under the opposition’s grip.”

This column has backed de Mistura and his predecessor, Lakhdar Brahimi, in their efforts to try to bring relief to the people of Syria and end the war. Our support for the latest effort is with eyes wide open. No doubt de Mistura’s plan is far from perfect and its chances of success may indeed be slim. The "freeze" does not seem to include a cease-fire by ground forces, for example.

De Mistura himself knows better than anyone the limitations of his approach, and could probably do a better job than his critics in explaining the many reasons he may not succeed. He has been negotiating without any real diplomatic muscle, through little more than will and persuasion, utilizing the good offices of the UN secretary-general and trying to complement Russian diplomatic efforts, also a slim reed, with only lip service support from the United States.

There should, finally, be an urgency for ending the Syria war. As if the humanitarian tragedy were not enough — and it does not seem to be to rally the international community to action — the expansion of the Islamic State (IS) to a territory the size of the United Kingdom as a threat to Europe and the US "homeland," one would think, would push the needle.

The United States and the “Friends of Syria” should get de Mistura’s back, coordinating with Russia and Iran, to implement and expand the freeze. It is not enough for the United States to simply wish the envoy well and then wonder if this plan will succeed.

The Syrian opposition should be part of the process of bringing relief and an eventual political transition to their country. There may be some positive strands from the Russian conference last month, as reported here, but there is more to be done, and the United States and its regional allies should have a role to play.

Since the collapse of the Geneva II talks last year, where Iran was excluded and the United States and its allies somehow expected Bashar al-Assad to negotiate himself out of power, the estimated death toll has doubled, from “well over 100,000 people” to “over 200,000,” according to UN Secretary-General Ban Ki-moon, while the number of foreign fighters in Syria has jumped from 7,500 to over 20,000, including 3,400 Westerners, according to US intelligence officials, as IS has expanded its reach.

As we wrote last week in support of de Mistura’s initiative: “There is no cease-fire, in Aleppo or anywhere, without Assad’s buy-in. There is no end to the killings, displaced and refugees, and no humanitarian assistance, without a cease-fire. There is no political transition, with or without Assad, until the guns go quiet — including Assad’s guns. An inclusive political transition, including a decentralization of presidential powers away from Assad, would provide a political complement to the war against IS.”

In a Feb. 20 briefing before the Security Council, Paulo Sergio Pinheiro, chair of the Independent International Commission of Inquiry on the Syrian Arab Republic, called for a political solution and an end to the daily occurrence of “unthinkable crimes” in Syria. He said, “It is unconscionable that Syrians should continue to suffer as they have for the last four years and have to live in a world where only limited attempts have been made to return Syria to peace, and to seek justice for the victims.”

Cataloging the suffering of Syria’s civilians, Edward Dark, writing from Aleppo, reminds readers that the vast majority of Syrians are caught in the middle of the various armed camps: “In some areas, regime forces have caused the most suffering and committed more war crimes. In other areas, the rebels are most to blame, and yet in others, the jihadists. In that sense, the Syrian conflict resembles more a collection of localized wars than a coherent whole, and although Syrian society is extremely polarized and split along ethnic, sectarian and geographic lines, the single most prevalent theme that unites us all is the loss of innocent friends and family and a genuine desire to see that end.”

Fehim Tastekin writes this week about the anxieties of the Turkish leadership about the staying power of Syrian President Assad.

“Developments on the ground indicate that the train-and-equip program is not likely to produce an immediate solution. Regime forces, supported by Iran and Hezbollah, have made advances not only in Aleppo but also in Quneitra, Daraa and the Damascus outskirts of Eastern Ghouta and Douma. The northern front is under heavy pressure. If the regime succeeds in cutting the opposition's supply lines, as happened in Homs, the opposition may have to surrender,” Tastekin reports.

The Wall Street Journal’s Yaroslav Trofimov reports this week that “the porousness of Turkey’s 500-mile border with Syria has become a strategic problem for Western efforts to defeat [the] Islamic State and prevent terrorist attacks at home. The militant group controls roughly half the frontier, the main gateway for the influx of thousands of foreign fighters into the battlefields of Syria and Iraq.”

This column highlighted Turkey’s lax border security after car bombs struck a border crossing in January 2014, arguing that Turkey would need to prioritize the safety of its citizens: “It will be daunting for Turkish security forces to implement a crackdown on jihadists entering or leaving Syria, which it has so far failed to do. … Syrian opposition forces would no doubt be affected by redoubled security efforts at the border.”

Tastekin further reports that court documents have revealed that rebels may have called in Turkish artillery shelling on Syrian army targets across the border, and that Ankara may have delivered arms to Ansar al-Islam, some of whose members are alleged to be linked to al-Qaeda affiliate Jabhat al-Nusra.

“The court documents contain remarks that reinforce suspicions about Turkey’s help to radical groups in the form of arms shipments. In a conversation between Ayhan Orli and President of the Syrian Turks Association Ahmet Sirin (alias Ahmad Ohrin), they say weapons sent from Turkey have actually gone to Ansar al-Islam.

“Ansar al-Islam generally operates jointly with Jabhat al-Nusra. When Orli says they have run out of ammunition, Sirin asks, 'What happened to those weapons that have gone to Ansar?' Orli replies, ‘I don’t know. You have to ask those who delivered the weapons to Ansar.'”

The rise of extremist groups like IS, and Ankara’s demonization of the largely Alawite Syrian government, has had an unfortunate effect on attitudes toward Shiites in Turkey.

Pinar Tremblay writes: “Turkish criticism of Syrian President Bashar al-Assad’s regime has reflected itself in both official and unofficial rhetoric, bringing to the forefront not only anti-Alevi but also anti-Shiite sentiments. There are several blogs (‘Danger of Iran’ and ‘Those who have deviated’) and news portals specifically dedicated to the threat of Iran, with Shiites referred to in derogatory terms.”