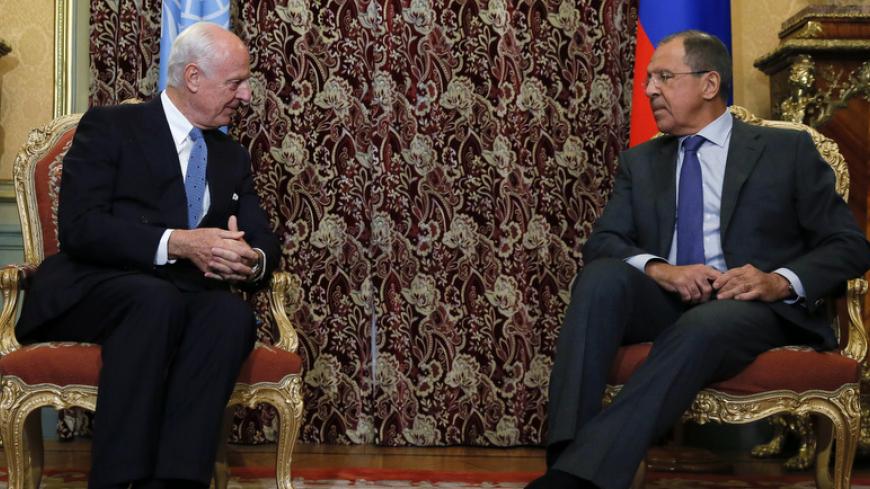 Russian President Vladimir Putin’s visit to Egypt on Feb. 9-10 signals a “new phase” in Russian diplomacy in the Middle East.

Despite deteriorating ties with the United States and NATO countries over Ukraine, Maxim Suchkov writes, "Russia is anything but isolated, while Europe is no longer the promised land for the state that seeks recognition of its global influence."

Vitaly Naumkin reports that Egypt and Russia have “shared positions on a number of regional issues; closely aligned interests (particularly on fighting international terrorism); a successful track record of bilateral cooperation on various fronts; and a strong personal bond of trust between respective leaders.”

Egypt’s leadership has grown frustrated with US admonitions and criticisms of its governance record, and from Cairo’s perspective, bewildering discussions of conditions on US military aid. While Egyptian President Abdel Fattah al-Sisi is hardly ready to ditch his country’s long-standing ties to the United States, the prospect of Russian arms and assistance could prove a useful complement to what some in Cairo consider more uncertain US support, especially as Egypt faces an ongoing terrorist insurgency in the Sinai Peninsula.

As a correspondent in Sinai reported this week, fighting terrorism has become a particularly urgent issue for Egypt to address.

Naumkin adds that Russia also considers Egypt an ally in its efforts to broker a political settlement in Syria.

“A vast field for cooperation has opened up for Cairo and Moscow, as each party has redoubled its efforts to mediate a settlement to the Syrian conflict. Prior to the advisory meeting of Syrian opposition, civil society and government representatives held in Moscow between Jan. 26-29 — the first meeting of its kind — opposition figures met in Cairo, even though no Syrian government delegation was there. I would not rule out a situation whereby, as a result of the Russian president’s visit to Cairo, the parties might agree to pool their forces in the context of a Syrian settlement. This would doubtless boost the chances for a successful resolution of this conflict.”

It might be understandable for some analysts to dismiss the Moscow conference, given the diplomatic false starts over four years in a conflict that has left more than 150,000 dead, 7.6 million displaced, 3.2 million refugees, 12.2 million in need of humanitarian assistance and at least 680,000 injured, according to the United Nations.

The United States has opted out of diplomacy since the Geneva II international conference on Syria collapsed last year. This has left the initiative to Russia and the UN, with the blessing of the United States, and the pivotal role of Iran, a trend this column has monitored closely.

Syrian opposition figures were not allowed to participate in the Jan. 26-29 Moscow conference as representatives of opposition parties, such as the National Coalition of Syrian Revolution and Opposition Forces (SOC), the leading umbrella group based in Turkey. The SOC and other opposition figures outside of Syria boycotted the conference. Nongovernment Syrian participation in Moscow included political opposition and reform advocates from inside Syria.

The absence of the SOC and other representatives of the external opposition no doubt limited the potential impact of the conference, but should the role of internal Syrian opposition figures be dismissed? Participants agreed to an 11-point list of “Moscow Principles” and a four-point “Appeal to the International Community” affirming the need to fight terrorist organizations such as the Islamic State (IS), rejecting outside interference and calling for increased humanitarian aid, while agreeing to meet again in a month’s time.

In a press conference held to announce the results of the meetings, Vitaly Naumkin, who moderated the discussions and helped draft the Moscow Principles, acknowledged the possibility for other organizations to play a role in future talks: “Clearly, the Moscow meeting is not in any way being set against the efforts under the aegis of the UN. Quite the contrary, I would venture to guess that [UN Special Envoy to Syria] Staffan de Mistura’s involvement in the Moscow process will be welcome.”

A diplomatic blitz by de Mistura followed. On Feb. 2, the envoy told the European Parliament’s Foreign Affairs Committee “Iran, Saudi Arabia, Turkey and Russia must be part of the talks, as there isn’t enough of a critical mass without them to achieve a solution.” On Feb. 7, he praised the Moscow talks and discussed the UN "local freeze" plan for Aleppo with Russian Foreign Minister Sergey Lavrov in Munich.

The key meeting in de Mistura’s tour was with Syrian President Bashar al-Assad on Feb. 11 in Damascus. The official Syrian Arab News Agency reported on Dec. 11 that Assad and de Mistura “discussed in a positive and constructive manner the new details in de Mistura’s plan on freezing fighting in Aleppo. Assad reiterated Syria’s commitment to supporting any initiative or idea that helps to resolve the crisis and to preserve the lives of citizens and state establishments.”

Juliette Touma, de Mistura’s spokeswoman, explained the UN envoy’s comment that Assad is a crucial part of the process to end the war in Syria.

"Syrian authorities should be part of the long-term solution," Touma told The New York Times in Beirut. According to the Times: "Referring to Mr. Assad, she added, 'For the de-escalation of violence, he [Assad] needs to be part of the solution' as a representative of the Syrian authorities. 'Assad doesn’t stand alone,' she said. 'He represents the Syrian institutions and these, too, must be preserved — the institutions that have been providing services and will continue to provide services.'"

It is unclear whether this latest diplomatic flurry will lead to the possibility of a "freeze" in the conflict in Aleppo or provide an opening for a political settlement. De Mistura realizes that "Assad must step aside" is a diplomatic nonstarter for those who seek an end, rather than a continuation, of the war. The UN envoy knows there is no cease-fire, in Aleppo or anywhere, without Assad’s buy-in. There is no end to the killings, displaced and refugees, and no humanitarian assistance, without a cease-fire. There is no political transition, with or without Assad, until the guns go quiet — including Assad’s guns. An inclusive political transition, including a decentralization of presidential powers away from Assad, would provide a political complement to the war against IS.

The action in Syria is turning on the diplomatic efforts of the UN, Russia and Iran. Washington has deferred — at least for now — and is instead focused on the debate over US President Barack Obama’s request for an authorization to use military force against IS, as Julian Pecquet reports, with little or no attention given to a Syrian diplomatic settlement. De Mistura will present his report to UN Secretary-General Ban Ki-moon and the UN Security Council in New York on Feb. 17.

Turkey, the reluctant ally in the fight against IS, turned its gaze inward this week in debating a new “Internal Security Law” that critics claim would come close to turning the country into a police state.

Semih Idiz writes, “The most controversial article of the draft law permits police to use firearms against people using Molotov cocktails, or what are loosely defined as ‘similar weapons,’ even when these are only thrown at public buildings.

“Opposition deputies and human rights groups fear this will increase the use of deadly force by the security forces in Turkey, where the police is already criticized for acting with impunity and using excessive force despite legal restrictions. The draft law also foresees a prison sentence of five years for demonstrators wearing balaclavas or covering their faces in other ways.”

While defending a repressive law by citing democracy may sound contradictory, Erdogan’s statements are best seen as part of his ongoing project to shape public opinion by disputing facts on the ground.

Mustafa Akyol writes that this tendency has manifested itself in the president’s recent crusade against interest rates:

“Erdogan kept pushing for an unusual theory of macroeconomics as well, dictating that high interest rates lead to high inflation. (The established economic theory, as explained here, asserts the opposite: Interest rates and inflation are negatively, not positively, correlated.) But Erdogan insists on his personal theory.”

The cult of Erdogan's unimpeachable correctness has also had severe consequences for the Justice and Development Party (AKP).

Akyol reports, “Success tempted the AKP, prompting it to revert back to its Islamism and initiate a much more ambitious narrative of building a new regional order, and even a new global order. Meanwhile, Erdogan turned into an unquestionable leader who is not limited by facts and creates his own facts, as envisioned by his Islamist ideology and extraordinary intuition. In the eyes of his hard-core supporters, he is not a mere political leader who formulates pragmatic policies. He is a total leader who redefines everything.”

Erogan is not completely unchallenged, however, as tensions have emerged with leaders of his own party.

Amberin Zaman writes that the resignation of Turkey’s spy chief, Hakan Fidan, and Prime Minister Ahmet Davutoglu’s reluctance to play a diminished role, have ignited wild speculation: “After 13 years in power, is the AKP beginning to crack? Might Erdogan be losing his grip? Many demand to know.”

Zaman reports that the beginnings of a crack may not be enough to unseat Erdogan: “Davutoglu and Fidan have stolen a march on the president, yet their success is in no way guaranteed.”