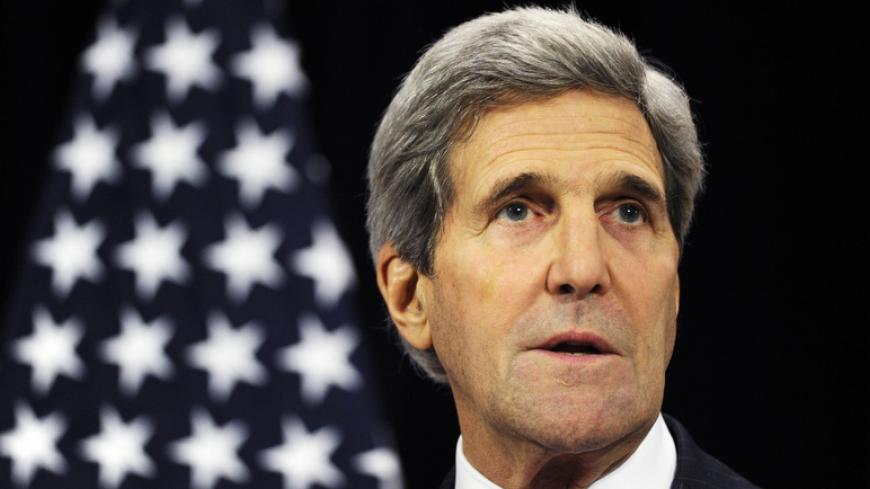 US Secretary of State John Kerry gives a statement after a roundtable meeting of the global coalition to counter the Islamic State militant group at NATO headquarters in Brussels, Dec. 3, 2014. - REUTERS/Eric Vidal

US Secretary of State John Kerry said Dec. 3 that “the net effect is positive” of reported Iranian strikes against Islamic State (IS) targets in Iraq.

Kerry emphasized that the United States and Iran are “not only not coordinating militarily right now, but there are no plans at this time to coordinate militarily.”

Arash Karami reported that Iranian officials have also brushed back talk of coordination, with Foreign Ministry spokeswoman Marzieh Afkam stating that she would “not confirm news about cooperation on a military matter,” while an anonymous Iranian official denied the existence of strikes entirely to Reuters.

This column has suggested that a nuclear agreement with Iran would be a catalyst for more expansive cooperation in Syria, Iraq and elsewhere in the region. This seems to be happening, incrementally, even in the absence of an agreement.

As Laura Rozen reported from Vienna, the latest P5+1 talks in the city, before the signing of an extension, gave rise to “cautious optimism that more rapid progress might now be made toward a final accord.” This progress carried over into the seven-month extension that allows the International Atomic Energy Agency expanded access to Iranian facilities and sets limits on R&D for centrifuges, among other conditions.

US National Security Adviser Susan Rice told The Wall Street Journal’s CEO Council this week that a safe zone in Syria, as advocated by Turkey, is “at best premature” and that it “would be a major investment of resources that would be something frankly of a diversion from the primary task at hand.” Kerry similarly referred to a decision on a buffer zone or safe zone as “premature.”

Semih Idiz writes for Al-Monitor that Turkey is unlikely to change its Syria policies until the United States clarifies its position on President Bashar al-Assad, so the friction in US-Turkey ties is likely to continue.

Some clarification of US intentions would no doubt be helpful. The United States has called for Assad to "step aside" since August 2011. It seems unhelpful, however, for the Barack Obama administration to frame its debate on whether US attacks on IS and terrorist groups in Syria indirectly support Assad — or by extension Iran — and that therefore the United States needs to go after both IS and Assad, intervening on two sides of a civil war. Welcome to the slippery slope.

Better to toss that line of thinking out altogether. Instead, the questions over a buffer zone or expanded investment in the Syrian opposition should be based on a cool-headed assessment of the balance of forces inside Syria, and framed as to whether the United States is prepared to take any action that would likely be opposed by the Security Council, would prolong the war and begin a formal division of the country. What would it mean for the campaign against IS? And would the United States be ready to take on the Syrian government directly, if the zone or opposition groups were challenged by Syrian government forces? And then what?

For those who cannot reach beyond the simplified view that a decision of such magnitude should be characterized as either “pro-Assad” or “anti-Assad,” rather than an analysis based upon US policy options and potential consequences, it is worth recalling that this column has supported aid to Syrian rebel forces in pursuit of a political settlement; called for the Syrian government's accountability for war crimes; provided on-the-ground reporting by Syrian correspondents on the rise of discontent in Alawite regions; and, as early as August 2012, and to date, has offered diplomatic strategies for a post-Assad transition in Syria.

Is IS attacking Kobani from Turkey?

The Turkish daily Radikal, translated in Al-Monitor, reported this week on the alleged presence of IS fighters in Turkish villages near the Mursitpinar border crossing with Syria in operations against Kurdish People's Protection Units (YPG) forces:

“Those who constantly watch the border from Caykara insist that IS had attacked YPG from the rear by crossing the border from Turkey. For them, the lack of intervention by the Turkish military tasked with border security is a sign that Turkey prefers to have IS control the border crossing. But even more worrying are the allegations that IS people have been freely entering abandoned houses on the Turkish side. There is no need to elaborate what kind of security fears this causes in the region and how it amplifies the distrust felt for security forces. Contradictory statements by senior civil servants and their ignoring of eyewitness accounts only intensify people's lack of confidence.”

The US Congress is giving more intensive scrutiny to Turkey’s policies toward foreign fighters operating in Syria. Julian Pecquet reports that during testimony before the House Foreign Affairs Committee, Robert Bradtke, the US Department of State's senior adviser for partner engagement on Syria foreign fighters was “asked by Rep. Ted Poe, R-Texas, whether Turkey was 'complicit' in allowing fighters to cross its border into Syria; he said no.”

While the United States has been preoccupied with its coalition effort against IS in Iraq and Syria, Russia has taken the lead in diplomacy toward a Syrian political settlement.

Vitaly Naumkin writes that Russia is looking to convene a preliminary conference on the future of Syria that would complement UN Special Envoy for Syria Staffan de Mistura’s plans for "freezing" the conflict in Aleppo. Russian Foreign Minister Sergey Lavrov recently met in Moscow with de Mistura, Syrian Foreign Minister Walid Moallem and former head of the National Coalition for Syrian Revolutionary and Opposition Forces Moaz al-Khatib, along with other Syrian opposition figures, toward this effort.

Russian diplomacy has also been instrumental in the P5+1 nuclear talks with Iran. Rozen writes that the Russian envoy to the talks, Deputy Foreign Minister Sergey Ryabkov, “has managed to maintain a constructive working rapport with US and European counterparts at the Iran negotiating table, despite the deep strains plaguing Moscow-West relations over Ukraine.” She adds: “US and Western officials and experts say the prospective Russia-Iran energy deal may help resolve one of the toughest issues in the nuclear talks — the size of Iran’s enrichment capacity in a final deal — and they have recently gone out of their way to praise the Russian role in the sensitive nuclear negotiations as being highly constructive, professional and creative.”

Israel’s Foreign Minister Avigdor Liberman, in an exclusive interview with Ben Caspit, said he will soon present to US and Western powers “a courageous peace plan with very painful concessions.”

Mazal Mualem reports that Liberman’s regional peace plan may be part of a bid to position himself among the contenders to replace Benjamin Netanyahu as prime minister.

Liberman explained to Caspit why he felt that the time was right for a regional approach to the Palestinian issue: "This is the first time that the moderate Arab world understands and internalizes the fact that its real threat is not the Jews, not Zionism and not Israel, but the Muslim Brotherhood and Jabhat al-Nusra and Hamas and the Islamic State and al-Qaeda and all the terrorist factions of the different denominations over the generations. Therefore this is the first time that we can say to all these moderate countries, 'Friends, we have a common enemy, let’s join hands and cooperate in the security realm as well as the economic realm.'"