The new pulse of Geneva II

The trend in the Geneva II process shifts to cooperation on humanitarian and counterterrorism issues; Erdogan under fire in Turkey. 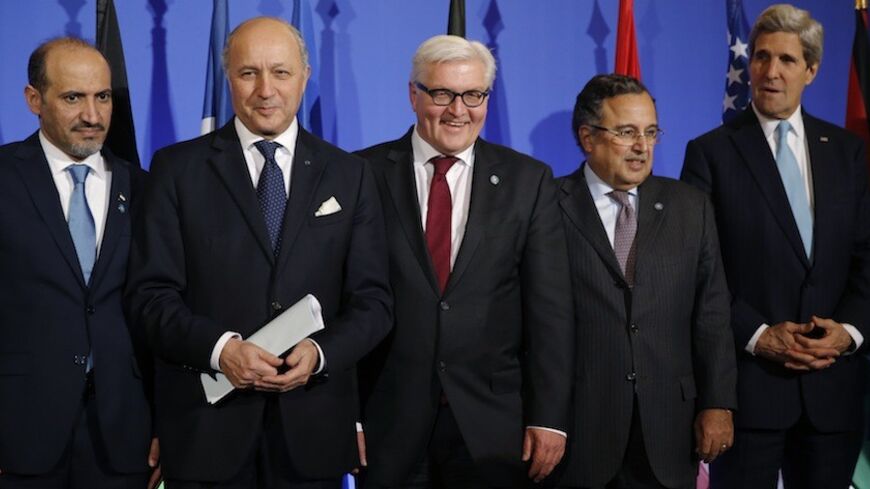 On Jan. 13, US Secretary of State John Kerry will meet with Russian Foreign Minister Sergey Lavrov and UN and Arab League Special Envoy to Syria Lakhdar Brahimi in Paris to discuss plans for the Geneva II conference, scheduled to commence on Jan. 22 in Montreaux, Switzerland.

On the agenda will be whether Iran should be invited to Geneva II, which both Lavrov and Brahimi support.

Kerry has said he welcomes a positive Iranian role in Syria, even from the “sidelines” of Geneva II, and that Iran could be invited if it accepted the Geneva Communique.

This all comes as the P5+1 countries and Iran have agreed for implementation to begin Jan. 20 on the "joint plan of action" to address Iran’s nuclear program, as Laura Rozen reports, and as Sigrid Kaag, head of the Joint Mission of the Organization for the Prohibition of Chemical Weapons (OPCW), said this week that the first shipment of chemical materials out of Syria was a “remarkable achievement” and that she expected the full elimination of chemical weapons material to be achieved by the June 2014 deadline.

Iranian Foreign Minister Mohammad Javad Zarif said this week, following a meeting with Syrian Deputy Foreign Minister Faisal Mekdad in Tehran, that Iran would participate in Geneva II, if invited, but will accept no conditions on Iran’s participation.

Iran, however, is not willing to endorse a transitional government or process that excludes Syrian President Bashar al-Assad, and instead supports negotiations between Syrian parties leading to elections. Iran is unlikely to support a cease-fire, let alone step back from its support of Assad, as long as Saudi Arabia is fueling jihadists as part of an anti-Iranian agenda in Syria and throughout the region.

Zarif told Al-Monitor in September that Iran has a history of constructive participation in such international conferences, including the International Conference on Afghanistan in Bonn in 2001, adding, “The image of Bonn without Iran would have been disastrous. … They can test it in Geneva to their own detriment.”

The Geneva Communique has provided an essential framework for the international community to commence negotiations on Syria. But if the United States is willing to reach out to the Saudi-backed Islamic Front, which includes among its ranks foreign fighters and those committed to Sharia in Syria, while at the same time excluding Iran, it might be worth taking a step back and rethinking the objectives for Geneva II and for the future of Syria.

Whether Iran is in the room or not in Geneva, Tehran will be on speed dial for the Syrian delegation there.

Zarif arrived in Beirut on Jan. 12 on a regional tour that will also take him to Syria, Iraq and Jordan to show that Iran will be playing an essential, if not decisive, role whether it is in Geneva or not. Walid Muallem, Syria’s minister of foreign affairs and expatriates, will be in Moscow on Jan. 16 en route to Geneva.

Meanwhile, Kerry pressed Syrian opposition leaders at the "Friends of Syria" conference in Paris on Jan. 12 to attend Geneva II.  After the meeting, he called for the Syrian government to enact “local cease-fires,” including in Aleppo, in advance of Geneva II, and said the opposition was prepared to consider possible prisoner exchanges.

Kerry’s initiative recognizes that the Syrian parties themselves are unlikely to agree on a transition while the opposition maintains that Assad must go, and Assad has no plans on going, and no one can make him leave.

The most realistic outcome for the conference, whether Iran and Saudi Arabia are present or not, would therefore be agreements on provisions for humanitarian corridors, on which both the Syrian parties and the conference sponsors would be compelled to try to work out, and counterterrorism.

There is now a consensus and awareness, including and especially among the sponsors of the conference, that Syria is ground zero for terrorism in the region, which is destabilizing Iraq and Lebanon, two key US allies, as well as accelerating the humanitarian tragedy in Syria.

Kerry said on Jan. 5, “This is part of the reason why the Geneva conference is so critical, because the rise of these terrorists in the region and particularly in Syria and through the fighting in Syria is part of what is unleashing this instability in the rest of the region. That’s why everybody has a stake. All of the Gulf states, all of the regional actors, Russia, the United States and a lot of players elsewhere in the world have a stake in pushing back against violent extremist terrorists who respect no law, who have no goal other than to take over power and disrupt lives by force.”

Vitaly Naumkin writes this week that terrorism remains the priority for Russia at Geneva II, and that the recent terrorist attacks in the south of Russia are directly or indirectly linked to jihadists fighting in Syria.

The trend toward humanitarian and counterterrorism cooperation could, and probably will, provide the next phase of what we now call the Geneva process, overtaking stalemated discussions on a political transition. The Syrian people can and should deal with Assad in their time and on their terms. But for US policymakers, events will require the continued shift of priorities away from regime change to combating the spread of terrorist groups that are threatening Syria, Iraq, Lebanon, Iran, Russia and the West.  That will require, at some point, at a minimum, an understanding on counterterrorism security cooperation with Iran and Syria, as well as some tough talk with US allies Saudi Arabia, Turkey and others that can do more to stem the flow of foreign terrorists and weapons to Syria. The real-life consequences of not dealing with Assad are more war, more terrorism and more suffering for Syrians and the region. The war must end, and there are no winners. As Ryan Crocker wrote last month in The New York Times, “We need to come to terms with a future that includes Assad — and consider that as bad as he is, there is something worse. A good place to start is Geneva next month and some quiet engagement with Syrian officials.”

Semih Idiz this week reports on the startling announcement by Turkish Foreign Minister Ahmet Davutoglu that the government of Assad and the Islamic State of Iraq and al-Sham (ISIS) are working together “behind the curtains.”

Idiz notes, “Davutoglu has rarely been correct in his predictions about Syria. Just about every plan and expectation he had for this country has gone awry in ways he never factored in.”

Davutoglu’s comments, a transparently desperate reaction to the unpopularity of Prime Minister Recep Tayyip Erdogan’s Syria policies and the international pressure on Turkey to clamp down on its borders, comes amid increasing evidence of Turkish facilitation of foreign fighters and material to Syria along its border. Fehim Tastekin reported this week for Al-Monitor that the Turkish government declared the contents of a mysterious truck, suspected of containing arms to Syrian fighters, a "state secret.”

As if Turkey’s unpopular and until now disastrous Syria policies were not enough, Erdogan is reeling from the corruption scandal and associated conflict between the Justice and Development Party (AKP) and the Gulen movement.

Orhan Cengiz writes that the corruption scandal has sparked concerns in Turkey of a return to a more prominent role for the military in Turkish politics.

Cengiz Candar, who spoke this week with some of the titans of Turkish industry, forecast an uncertain and bleak year for Turkey, and referenced The Economist in saying that Turkey is no longer a "shining example."