Turkey may be resetting its regional policies in response to popular discontent and the threat from terrorist groups operating in Syria. 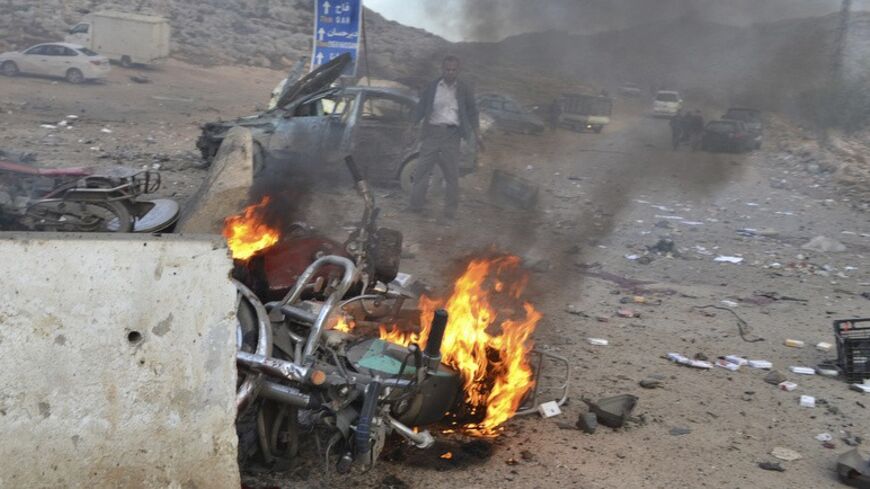 A man stands near a burning motorbike at the site of a car bomb attack at the Bab al-Hawa border crossing between Syria and Turkey, in Idlib, Jan. 20, 2014. - REUTERS/Amer Alfaj

GENEVA — The future of Syria may ultimately be influenced as much by a shift in Turkey’s Syria policies as it will be by the talks in Geneva.

The testy exchange between Syrian Foreign Minister Walid Moallem and his Turkish counterpart Ahmet Davutoglu at the opening plenary of the Geneva II conference in Montreux on Jan. 22 revealed the depth of animosity between the two countries.

But beyond the public acrimony of the foreign ministers in Montreux, Turkey is, more than ever, threatened by al-Qaeda-linked terrorists who are operating in Syria.

On Jan. 20, two days before the start of the Geneva II conference, twin car bombs went off on the Turkey-Syria border at the Bab al-Hawa crossing, killing 16 and prompting Turkey to close the crossing.

Turkey had earlier closed the Bab al-Salameh, Carablus and Tal Abyad crossings after the Islamic State of Iraq and al-Sham (ISIS) had taken them from Free Syrian Army (FSA) forces on the Syrian side of the border.

Turkey, Qatar and Saudi Arabia back the Islamic Front and Syrian Revolutionary Front fighters, with the direct lines of support often blurred, and there are well-documented accounts of how foreign fighters from around the world — some perhaps with links to terrorist organizations — have made their way to Syria via Turkey, including Fehim Tastekin’s report for Al-Monitor from October 2013.

Turkey is now on alert that ISIS may be planning terrorist attacks inside Turkey against targets associated with the Istanbul-based Syrian opposition groups, including hotels, as also reported by Tastekin for Al-Monitor this week.

It will be daunting for Turkish security forces to implement a crackdown on jihadists entering or leaving Syria, which it has so far failed to do. While the target of such an effort would be ISIS and al-Qaeda-affiliated groups, Syrian opposition forces would no doubt be affected by redoubled security efforts at the border, as it is difficult, on any border, including the US-Mexican border, to distinguish the good guys from the bad. Tastekin describes a queue of trucks stretching 19 miles at Bab al-Hawa after the Jan. 20 bombing. Turkey’s tougher border controls, if implemented, would therefore have consequences for Syrian opposition forces.

If Turkey cracks down, the opposition might look elsewhere for more secure supply lines. The Syrian border with Iraq is controlled by ISIS and related forces, so that is an unlikely option for the opposition, and it is an open question if Jordan, which has so far been spared from Syria-related terrorism — unlike Iraq, Lebanon and now Turkey — would want to get even more deeply engaged in military efforts against the Bashar al-Assad government.

The blowback from terrorists is connected to popular discontent with Turkey’s Syria policies. The vast majority of Turks want their government to stay neutral and keep out of the Syria conflict. Turkish President Abdullah Gul made public the "open secret" of his own dissatisfaction with Prime Minister Recep Tayyip Erdogan’s Syria policy. In a Jan. 13 speech to Turkey’s ambassadorial corps, he said, “When developments in Syria are considered in particular, the threats and potential threats that have emerged are growing.” He added, “In view of the realties that have emerged on our country’s southern flank, we have to recalibrate our diplomacy and security policies by also taking into consideration the threat perceptions that have emerged around us.”

As Semih Idiz writes for Al-Monitor, “While Ankara appears to be on the margins vis-a-vis efforts to end the Syrian civil war, developments beyond Ankara’s control could ironically and inadvertently make Turkey an important player in Syria by default, and not by merit.”

It will be worth watching Erdogan’s visit to Iran this week, where Syria will be on the agenda. Ali Hashem reported last week from Tehran on the potential for a thaw in Turkey-Iran relations, including over Syria. This may take some time, but the trend lines, which Al-Monitor has covered closely, seems to be toward a reset — now openly backed by Gul — of Turkey’s failed policies toward Iran, Syria and the region over the past three years, especially as Syrian terrorism now threatens Turkey.

Meanwhile, Lakhdar Brahimi, the special envoy of the UN and the Arab League for Syria, said on Saturday night in Geneva that the first two days of negotiations “haven’t achieved much,” as he gently laid out an agenda that sought to address humanitarian relief for Homs and prisoner exchanges and to avoid, for now, the sensitive topic of a transitional governing body.

The National Coalition of Syrian Revolutionary and Opposition Forces (SOC), backed by the United States and others, interprets the Geneva communique as ruling out any future for Assad.

The communique does not, however, stipulate that Assad must step down. It calls for a “transitional governing body” with “full executive powers,” which “could include members of the present government and the opposition and other groups and shall be formed on the basis of mutual consent.” After the establishment of the transitional body, the next steps include a “National Dialogue process” (“It is for the Syrian people to determine the future of the country”); a “review of the constitutional order and legal system … the result of the constitutional drafting would be subject to popular approval”; and, ultimately, “free and fair multi-party elections.”

US Secretary of State John Kerry, the National Coalition and its backers say that because “mutual consent” means the opposition will not agree to a role for Assad, he cannot be part of a future Syrian government. The Syrian government is not giving in on this point, and it, too, must give consent to the members of the transitional governing body. So, not unexpectedly, there is a deadlock on transition discussions with as yet no clear road map or compromise.

There has been some concern in Geneva about the influence of the National Coalition team inside Syria. In his Jan. 22 press conference following the plenary session, Russian Foreign Minister Sergey Lavrov said, “ … [O]ther groups of the Syrian opposition should be involved in the dialogue during direct negotiations between the Syrian parties, because the internal opposition is not represented at the negotiation right now.”

The National Coordination Committee for Democratic Change (NCC), an internal umbrella organization comprised of various leftist and nationalist opposition parties, refused to participate in the Geneva talks, despite being offered two seats in the 15-member delegation organized by the SOC to the opening plenary in Montreux, as Antoun Issa reported.

The National Coalition delegation so far lacks representatives from armed opposition groups in Syria, such as the Islamic Front, FSA and Syrian Revolutionary Front, although the SOC and its supporters have been trying to enlist someone “from the ground,” including and especially Jamal Maarouf, leader of the Syrian Revolutionary Front, which is supported by Saudi Arabia, to participate in the negotiations.

Walid Moallem told Al-Monitor on Jan. 23 that he plans to test the influence of the National Coalition to deliver on a cease-fire, saying, “We want to see how much this opposition is related to the armed group in Aleppo.” The Syrian foreign minister said that his Jan. 17 proposal to halt military operations in Aleppo was in response to Kerry’s appeal for a “localized cease-fire,” beginning in Aleppo. Moallem added, “I still wait for the response from the American side.”