Turkey under pressure over jihadists on border

The recent terrorist bombing at the border and the acrimonious exchange between the Turkish and Syrian foreign ministers at Geneva II hints at the extent to which Turkey has become embroiled in the Syria conflict. 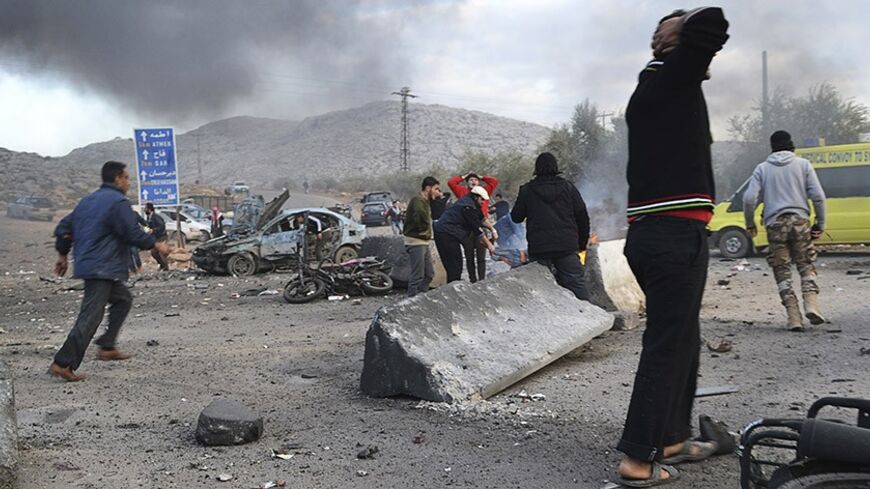 Men react as others rush at the site of a car bomb attack at the Bab al-Hawa border crossing between Syria and Turkey, Jan. 20, 2014. - REUTERS/Amer Alfaj

It's unclear how enthusiastic the government of Recep Tayyip Erdogan is over the Geneva II talks on Syria, given that these talks effectively legitimize the regime of Syrian President Bashar al-Assad, while Ankara continues to insist that this regime has lost all legitimacy. Both Erdogan and Foreign Minister Ahmet Davutoglu are saying that they support these talks, of course, and expressing hope that it bears results.

It was nevertheless telling to see Erdogan immediately latch onto the dreadful photographs, which were revealed just before Geneva II kicked off, and which reportedly show the scale of the atrocities committed by the Assad regime. Erdogan insists that these images should be enough to spur the international community to action.

By that, he means action designed to bring down Assad and his regime, a topic that has been his hobbyhorse from the start of the Syrian crisis. That, however, is clearly not in the cards as the international focus turns to a political settlement for Syria based on negotiations between the regime and the opposition.

The basic truth for Erdogan today is that circumstance has left Turkey sitting at the same table with a regime it despises and wants toppled. The animosity between the sides was also reflected in the speeches of Syrian Foreign Minister Walid Moallem and Davutoglu during the opening session of Geneva II in Montreux on Jan 22.

A development of much more significance for the wary Turkish public, however, is that Turkey continues to face a growing security threat from al-Qaeda-related groups that have taken control of large swathes of land in northern Syria along the Turkish border.

The battles that have broken out between jihadist groups for control over regions they have wrested from the regime, on the other hand, have merely complicated matters further for Turkey, making its Syria debacle appear even more intractable.

Ankara was forced to close its border gates with Syria after one of these groups, the Islamic State of Iraq and al-Sham (ISIS), captured territory just across the Turkish border crossings of Oncupinar, Karkamis and Akcakale. (See Fehim Tastekin’s Jan. 23 post for Al-Monitor’s Turkey Pulse).

Turkish papers have also been reporting that security forces are taking precautions against ISIS — Ankara’s new enemy in the region — after obtaining information that indicates the group is preparing to carry out bomb attacks in major Turkish cities and towns. The main target of these attacks, according to press reports, will be rival groups in the anti-Assad opposition who are based in Turkey and which ISIS is also fighting in Syria.

Meanwhile, the growing international perception that Turkey provides a vital lifeline to “friendly” jihadists — including some on the West’s watch-list — who are fighting with both the Syrian regime and ISIS, has clearly started to rankle among members of Erdogan’s government who are increasingly defensive on this score. Appointed minister for justice on Dec. 26, Bekir Bozdag, a key figure from Erdogan’s Justice and Development Party (AKP), came out angrily on Jan. 22 to deny these claims.

“Turkey has always taken the stand that has to be taken against al-Qaeda and other terrorist organizations and will continue to do so from now on. But if there are those who are trying to show that the Republic of Turkey is assisting terrorist organizations, they should know these are useless efforts, because it is out of the question that such assistance is provided,” Bozdag said in an address to parliament.

Bozdag is currently in the eye of the storm over Syria-bound trucks which were stopped recently by security forces after a tip-off indicating that they were laden with weapons. The trucks were prevented from being searched on order from the government on the grounds that they were part of a secret mission by the Turkish intelligence agency MIT.

The refusal to have the trucks searched has merely added fuel to speculation at home and abroad that Ankara is supplying radical groups in Syria with weapons. Aware of increasing reports to this effect in the Turkish and international media, the Syrian regime is trying to turn these reports to its advantage.

The Assad regime also enjoys the indirect support of Russia and Iran when it makes these claims against Turkey and other regional countries. Although these two countries have not named anyone when maintaining that terrorists in Syria are getting support from various countries, it is clear that they have Turkey in mind, too.

“No one except for d ppl of #Syria should determine Syria's future. Bloodshed must end& states sponsoring #terrorism should stop their support” Iranian President Hassan Rouhani tweeted on Jan. 22., clearly smarting that his country had not been invited to participate in Geneva II, but wanting nevertheless to have a say in the proceedings.

Damascus has already complained to the UN Security Council that Turkey is supporting terrorism in Syria, so it was inevitable that Moallem would bring up the subject at Geneva II. Arguing that his country’s neighbors were “backstabbers,” Moallem accused Turkey of supporting terrorists and bringing matters to where they are in Syria today.

“All of this would not have happened if it had not been for Erdogan; they did not know that magic would turn against the magician one day. Terrorism has no religion,” Moallem said, referring to the problems Ankara is facing with jihadist groups in northern Syria.

That he singled out Erdogan, even though the Syrian regime also accuses Saudi Arabia and Qatar of aiding terrorists, goes to show the depth of animosity that has developed between Ankara and Damascus. Not surprisingly, Davutoglu responded to Moallem in like fashion: “We all know who the terrorists in Syria are. I wonder how the representatives of the regime think that they can deceive the entire international community with their lies. I don’t even intend to say anything in response to those who are so shameless after all their heinous crimes against their own people. History will judge them very badly,” Davutoglu said.

Davutoglu’s remarks also revealed the extent to which Turkey has become embroiled in the Syrian civil war, which some diplomats maintain will limit Ankara’s capacity to play an active role in the political efforts to stabilize Syria due to opposition from the Assad regime.

Despite angry rhetoric from the Turkish government, it is nevertheless clear that circumstance is forcing Ankara to readjust, if not fully reset, its Syria policy. Turkey's acceptance — albeit reluctantly — of the Geneva format, which in effect has provided international legitimacy to the Assad regime, is also an indication of this.

This is also in line with President Abdullah Gul’s call for a “recalibration” of Ankara’s Syrian policy based on the realities on the ground.

While Ankara appears to be on the margins vis-a-vis efforts to end the Syrian civil war, developments beyond Ankara’s control could ironically and inadvertently make Turkey an important player in Syria by default, and not by merit.

Take the closing of the border gates with Syria that came about not because Ankara wants to do this — Turkey is insisting after all that it will maintain its open-border policy for refugees — but because it has no choice but to do it due to mounting security concerns.

If vital supply lines to opposition groups over Turkey — be they radical or moderate — are cut off in this way for an indefinite period, this will clearly have implications for the opposition and the Syrian regime alike.

In the end, Ankara has the anti-Western jihadists and Salafists — who are avowedly fighting for an Islamic state and not a democratic one in Syria, and who have received logistical support from Turkey — to blame for complicating its Syrian policy by gradually making the Assad regime, despite all the horrors it has perpetrated, appear the lesser evil for many in the international community.