Erdogan under pressure as Syrian crisis spreads to Iraq

Turkish Prime Minister Recep Tayyip Erdogan has limited regional influence and few good options as the pressure builds to slow the spread of the Syria war. 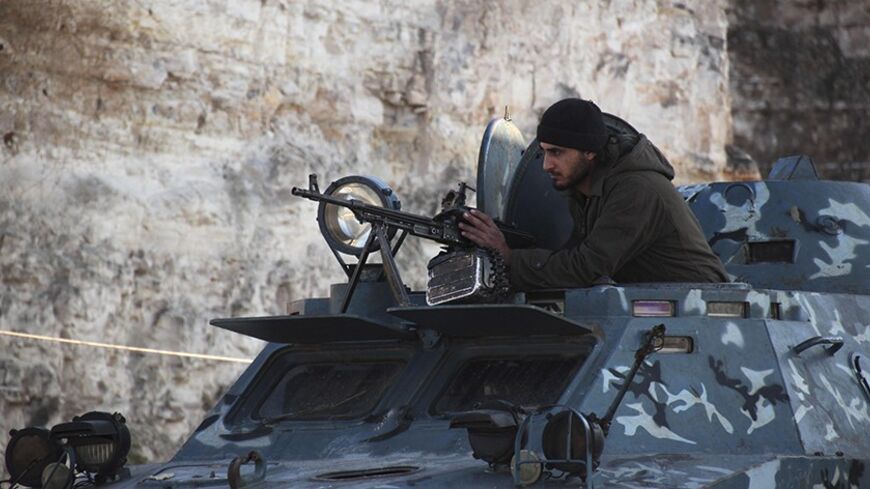 A member of al-Jabha al-Islamiya takes position on an armored vehicle at a checkpoint between the village of Kafaroumeh and the town of Maaret al-Naaman, to prevent members of the al-Qaeda-affiliated Islamic State of Iraq and al-Sham (ISIS) from advancing, Idlib, Jan. 6, 2014. - REUTERS/Fadi Mashan

A highly risky situation is emerging for Turkey on its eastern borders, as developments in northern Syria continue to deteriorate in favor of al-Qaeda-related groups that are also trying to make headway in Iraq’s strategic Anbar province. These developments have also pushed the question of removing President Bashar al-Assad from power to the back burner for the West as combating jihadists becomes a much more pressing need.

As work continues for the Geneva II conference, Ankara remains opposed to any settlement that will keep Assad in place. Addressing a Jan. 6 Nikkei conference in Tokyo, where he was on an official visit, Prime Minister Recep Tayyip Erdogan underlined this point once again.

Referring to “certain mistakes made at Geneva I,” Erdogan said, “We hope these mistakes will not be made at Geneva II, that a successful result is obtained there and that a step can be taken for a Syria without Bashar.”

Concern is nevertheless increasing among Turkish security and intelligence officials over the advances in Syria and Iraq by al-Qaeda-affiliated groups, particularly the Islamic State of Iraq and al-Sham (ISIS), whose name reflects its ambitions.

Erdogan, of course, has hardly any influence left in the region that could alter the situation according to his expectations or desires. Other remarks by him in Tokyo also suggested that he is still not prepared to come to terms with the situation developing on the ground.

For example, he emphasized the need for “democracy” and “respect for the will of the people” of Syria. Erdogan still appears to believe that a result can be obtained in Geneva which would, in addition to getting rid of Assad, make this possible.

The West, however, seems to be much more concerned presently with the urgent need to stabilize Syria as much as is possible, and to address the issue of the radical Islamists whose brutality matches that of the regime.

Diplomats in Ankara agree that if such groups are seen to be gaining absolute control over the areas they are operating in, this could end up making Assad the “lesser of two evils” for many. Concern about these groups, and particularly ISIS, has already made indirect allies of the United States, Russia and Iran in Iraq.

These countries are promising military assistance to the government of Prime Minister Nouri al-Maliki as it combats ISIS in Anbar province, which shares a long border with Syria and contains the city of Fallujah. Turkey has little support left for its position on Syria, with the exception of some regional countries headed by Saudi Arabia, a country that it is at odds with over Egypt.

Riyadh is reportedly behind the group of “moderate Salafists” operating under the banner of “the Islamic Front,” which is also fighting al-Qaeda elements in Syria and, according to media claims, also receiving support from Turkey and Qatar for this.

Many in Turkey wonder now if the truck that was stopped as it headed for the Syrian border by Turkish police, who media reports said were acting on a tip that it was laden with weapons, was destined for this front. The truck was subsequently allowed to continue on its way on orders from the government, preventing it from being searched. All the Erdogan government has been prepared to say about the truck is that its cargo contained aid for Syrian Turkmen. It has refused to elaborate by citing the law protecting state secrets.

Al-Monitor’s Edward Dark characterized the Islamic Front as “a fusion of Salafist jihadist Islamist groups, not as extreme in ideology as al-Qaeda's [ISIS] or Jabhat al-Nusra, but nevertheless by no means mainstream like the Free Syrian Army (FSA). It openly calls for Islamic Sharia rule instead of secular democracy.”

Being on the same page with Riyadh concerning Assad’s demise does not mean, however, that the Syrian policies of Turkey and Saudi Arabia are driven by similar considerations. It is clear that Riyadh’s primary concern is to keep Iran at bay, even if this comes at the cost of settling for a failed state ruled by Sunni extremists, rather than an Iran-friendly regime in Syria, as Dark puts it.

Meanwhile, the bloody internecine fighting among jihadists in northern Syria, where they are vying for control over the areas they once captured from regime together, poses further complications for Ankara. To start with, it adds to the volatility on Turkey’s borders and increases the possibility of undesired spillover effects.

One such effect was the kidnapping of Turkish journalist Bunyamin Aygun more than a month ago in northern Syria by ISIS. Aygun, a seasoned war correspondent, was rescued over the weekend after a harrowing time only kilometers from the Turkish border. His rescuers, according to his own account, were from the group calling itself Ahrar al-Sham.

Aygun told the media that members of this group, which is attached to the Islamic Front, fought ISIS forces for three and a half days to secure his release. Aygun was brought to Turkey by members of the Turkish intelligence service MIT, which has reinforced the belief that Turkey is in close contact with the Islamic Front.

This incident has also fueled speculation about the mysterious truck stopped last week. Many believe now that it may have been carrying weapons to Ahrar al-Sham, either as the price for rescuing Aygun from ISIS or as a regular consignment.

If true, this would anger Turkey’s Western allies, who have been pressing Ankara not to provide support to radical Islamist fighters in Syria and to help bolster moderate and secular forces in the country instead. The Saudi-backed Islamic Front, it appears, is also in the West’s black book.

Washington and London stopped all aid to the Syrian opposition in early December, when fighters attached to the Islamic Front seized a depot full of weapons belonging to the FSA. The incident demonstrated that any lethal equipment provided to the FSA could easily fall into the hands of radical elements.

All of this is a far cry from Ankara’s initial expectations for Syria. Rather than being a “game setter,” as it once hoped, Ankara is being led by events today. Meanwhile, there is an increasing possibility that Iran will participate in Geneva II, especially after US Secretary of State John Kerry’s green light for it.

Ankara is trying to convince Tehran to at least accept that Assad should go in any settlement for Syria, even if key elements of his regime remain. The matter was broached again by Foreign Minister Ahmet Davutoglu when he met his Iranian counterpart Mohammad Javad Zarif in Istanbul on Dec. 4.

However, Turkey is unlikely to succeed in this venture, given Tehran’s unwavering support for Assad since the start of the Syrian crisis.

The only real option left to Erdogan, therefore, is to go beyond reluctant expressions of hope that Geneva II will work, and to see what he can do to make sure it works, with or without Assad. This appears particularly crucial at a time when a bigger danger than Assad is looming for Turkey, the region and the world.