Turkish opposition politicians and many in the public are questioning why trucks associated with Turkish intelligence may have been carrying arms to radical groups in Syria. 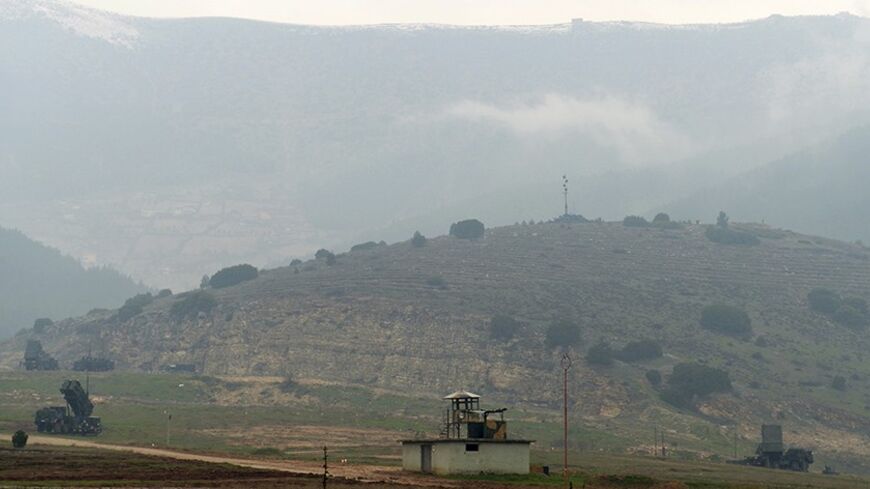 A view of of Kahramanmaras, near the Syria-Turkish border, Feb. 23, 2013. - REUTERS/Rainer Jensen

Already shaken by a debilitating corruption and bribery scandal, Prime Minister Recep Tayyip Erdogan is now confronted with another potential scandal involving weapons allegedly being supplied secretly by Turkey to the Syrian opposition, including radical elements that are under increasing international scrutiny.

Not wasting the opportunity, some opposition deputies are even going overboard and claiming that this affair will carry Erdogan and members of his government to the International War Crimes Tribunal in The Hague.

The government acted the way it did after a similar truck incident on Jan. 1, and also prevented the latest trucks to be intercepted from being searched on the grounds that they were part of a secret mission by the Turkish intelligence service (MIT) that could not be divulged.

The full details of the gendarmerie operation against Syrian-bound trucks, as well as the government’s initial response to it, can be found in Fehim Tastekin’s Jan. 20 post for Al-Monitor’s Turkey Pulse.

Following the incident on Jan 1, Interior Minister Efkan Ala said the MIT truck stopped then was carrying supplies to Syrian Turkmen. He refrained from providing any further details by citing the law on state secrets. No explanations at all are being provided this time about the cargoes of the trucks intercepted on Jan 19, although leaks to the press suggest they, too, were laden with weapons.

Not surprisingly, public curiosity has been aroused further due to this shroud of secrecy, with many wondering why, if their cargoes are innocuous as government circles are suggesting, these trucks are being prevented from being searched.

By avoiding this simple procedure, the government is merely stoking public suspicions that it is involving Turkey in clandestine and illegal activities that have to be kept secret, not just from the public but also from prosecutors, the police and the gendarmerie.

Opinion polls have consistently indicated that the majority of Turks are wary of getting embroiled in the Syrian crisis, and incidents such as the ones involving these trucks only add to these concerns. The double suicide car bombing at the Bab al-Hawa border crossing between Syria and Turkey on Jan. 20, which killed at least 16 people, has added to these concerns.

This latest truck incident also came on the eve of the Geneva II conference and at a time when Syrian President Bashar al-Assad is attempting to undermine Turkey politically by claiming it is supplying weapons to terrorists in his country.

Government circles in Ankara are now highlighting the new revelations about systematic torture and murder by the Syrian regime of thousands of opposition members, in an effort, as some commentators are claiming, to divert attention away from the trucks. The pro-government media has reacted angrily to journalists who claim this.

Meanwhile, Erdogan is livid with the gendarmerie officers and the members of the judiciary who conducted this latest operation against the Syria-bound trucks. Erdogan is claiming that those involved in this latest operation — like the security and judicial personnel behind the current corruption investigation involving members of his government — are part of a plot to topple his government.

Erdogan’s anger was apparent on Jan. 20 prior to departing for Brussels on an official visit, when he was asked by reporters at the airport in Ankara to comment on remarks by Kemal Kilicdaroglu, the leader of the main opposition Republican People's Party (CHP), about the latest truck incident.

Kilicdaroglu said earlier in the day that if the trucks were carrying humanitarian material then there was no logic to keeping their cargoes a secret. “These trucks are carrying weapons. The Turkish Republic’s international legitimacy is thus being put in question,” he added categorically, and went on to say, “Gun-running is not part of the MIT’s job.”

Erdogan’s response was characteristically harsh. “To start with, anyone who says this cannot be from this country’s opposition,” Erdogan said, adding, “I doubt the patriotism of a person who exposes his own national intelligence service to the world in this manner.”

He went on to suggest Kilicdaroglu read Article 26 of the law which regulates MIT activities. The article indicates that members of the MIT, which is attached to the prime minister's office, can not be charged and prosecuted without the prime minister’s permission over missions they have been assigned to carry out by the prime minister.

Erdogan said no prosecutor has the authority to question what the MIT is carrying, or to initiate operations like the ones conducted against the Syria-bound trucks on Jan. 19, without his permission. “This is another version of the parallel setup,” he said, insinuating with this remark that those behind this latest operation are also part of the plot to topple him.

Erdogan and members of his government use the term “parallel setup” to denote members of the Islamist Gulen movement who, they claim, have lodged themselves deep within various organs of the state from where they are trying now to topple the government by underhanded methods.

After the corruption and bribery scandal broke out on Dec. 17, the government initiated a dragnet operation involving thousands of police officers, as well as member of the judiciary and the state bureaucracy, with the intention of weeding out these alleged plotters. “Unfortunately, our gendarmerie forces have been used here also,” Erdogan said before flying off to Brussels.

He also indicated that legal proceedings had been initiated against the prosecutor and the senior gendarmerie officers behind this latest operation. “Whatever has to be done in connection with these people will be done,” he said threateningly.

The prosecutor and the police officers involved in the interception of the truck on Jan. 1 were assigned to other jobs immediately after news of the incident had appeared in the press. All the officials involved in this latest incident are expected to meet a similar fate.

Erdogan, however, appears to have added grist to the opposition’s mill by citing Article 26 of the law on MIT activities. By referring to this article, he also indicated in effect that whatever the current MIT operation in Syria may be, this was ordered by him. Muharrem Ince, the deputy head of the CHP’s parliamentary group, and an outspoken opponent of Erdogan, was quick to pick up on this point.

Ince contended that the government’s refusal to let the trucks in question be searched was confirmation that Ankara is supplying arms to terrorist groups in Syria. He argued that this put Turkey internationally in the category of states sponsoring terrorism.

“You can take these trucks illegally all the way to Syria. But their journey will not end there. They will carry this government and a lot of public servants to the court in The Hague as war criminals,” Ince added. “But those tried there will not just be individuals, but the Republic of Turkey.”

Such criticism at home, when combined with the belief abroad that Ankara is involved in clandestine activities in Syria, including supplying arms to Islamist groups, has also weakened Turkey’s ability to play a major role in Syria in the lead-up to Geneva II.

The Assad regime and its principal backers in Moscow and Tehran will obviously use the allegations concerning MIT operations to undermine any position taken by Ankara on the Syrian crisis that they oppose. It is equally clear that the incident involving the trucks undermines Ankara’s ability to influence its Western allies on issues pertaining to Syria.

These allies are deeply concerned today with the headway anti-Western and self-avowed anti-democratic jihadist groups are making in parts of Syria, so much so that their intelligence services are reportedly holding secret talks with the Syrian regime.

Much to Ankara’s annoyance, the West appears increasingly to be saying at this stage that “the devil you know in Syria is better than the devil you don’t know.” Given this overall picture, Syria is set to provide more headaches for Erdogan at a time when he is already beleaguered by a corruption scandal at home.

by Murielle KASPRZAK and Joseph SCHMID | AFP | May 26, 2022
END_OF_DOCUMENT_TOKEN_TO_BE_REPLACED