Turkish gendarmes arrested and prosecuted for stopping and searching trucks — which were chartered by Turkish intelligence — feel they are unfairly prosecuted for obeying orders. 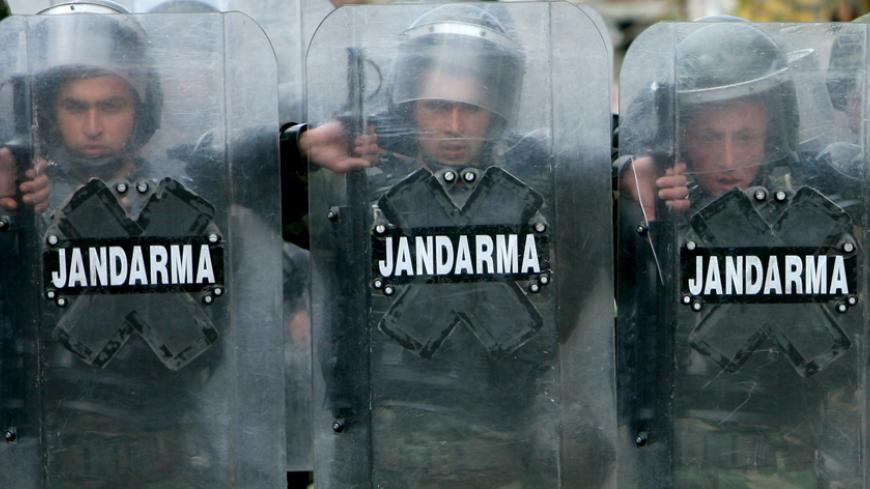 Turkish gendarmes stand guard during the funeral of a rebel belonging to the separatist Kurdistan Workers Party (PKK) in Istanbul, April 17, 2007. - REUTERS/Osman Orsal

Last week, Turkey was rattled by a new development related to the Jan. 19, 2014, operation in which seven trucks chartered by the National Intelligence Organization (MIT) were stopped, searched and found to be illegally transporting weapons and ammunition to Syrian opposition groups.

Seventeen gendarmes, all but three of them junior personnel, were arrested on charges of “membership in a terror organization” and “attempting to subvert the Republic of Turkey.” Among those detained and sent to prison in Istanbul, on questionable charges, for the incident near Adana in south Turkey were a lieutenant colonel (the chief of Hatay province gendarmerie intelligence), two majors, a captain, six first lieutenants and six noncommissioned officers. The arrests and trials of the largely junior gendarmes have aroused a plethora of questions, while scores of prosecutors, police and high-level bureaucrats involved in the case remain free.

Everyone remembers that one of the most reverberating aspects of the struggle between the Justice and Development Party (AKP) government and the Gulen community was this particular incident that involved these trucks that the MIT had hired near Adana.

Prime Minister Ahmet Davutoglu chimed in by saying that the personnel involved in this operation were "proof of the penetration by the parallel structure [Gulen movement] in the Turkish army."

Hence, they claimed this incident was a conspiracy against the government, and that the gendarmes initially had carried out the operation under the instructions of the "parallel structure." That they had cranes and iron cutters on hand for the search — tools these personnel would not normally carry — was yet another sign the operation was planned in advance.

The government’s unconcealed ire against the gendarmerie in a way sealed their fate. The court in explaining its ruling said the suspects had known each other and that some had been aware of the MIT operations, thus generating strong suspicion that the search of the trucks was designed to overthrow the Turkish government. The judge dismissed the defense of the detained officers and gendarmes — that they had not known the identity of those involved — as unrealistic. Instead, the gendarmes had tried to expose the MIT's activities and the cargo in the trucks, to place the government in an indefensible position, the decision said.

But the detained personnel in their depositions said they had no command-control relationship with the Gulenist movement.

Some excerpts from the depositions of those involved may help to understand their point of view:

One of the gendarmerie intelligence noncommissioned officers said his suspicion about the trucks was first aroused when he monitored a dialogue on Jan. 18, 2014, on a shipment of narcotics from two telephone numbers. He told Al-Monitor, "I assessed that the cargo in the trucks could not be narcotics because the shipment was moving from west to east. Given that trucks held steel containers, I suspected that they could be carrying weapons or ammunition. I reported it to the Adana Provincial Gendarmerie Command."

A gendarmerie intelligence major said when he arrived at the scene of the incident that two MIT officials named Deniz and Semih were negotiating with the gendarmes and told him: "This truck is loaded with weapons to the rim. If it is opened, tomorrow the government will fall, the ground will shake and the world will go up in arms." He said the MIT officials needed time to deliver the weapons across the border, but he told them this was not possible. The gendarmerie did not have such authority and the situation was for the prosecutor to sort out. He added that a little later the senior prosecutor of the nearby town of Kirikhan arrived, and while they were discussing the issue, under instructions received from the provincial governor, some of the MIT officials left the location with the truck despite the warnings of the prosecutor.

According to Ali Gayiranal, a defense attorney for the defendants, the gendarmes who remained at the location of the incident were arrested because of political pressures, while those who had left the scene remained free. Another defense attorney, Hasan Tok, said the gendarmes were only applying the law and following instructions from prosecutors, and paid heavily for their commitment to their mission.

According to a retired gendarme officer who spoke to Al-Monitor on condition of anonymity, the gendarmes cannot disobey instructions of the prosecutor. He said, "If they do, they will immediately be charged with neglect of duty." He said the real scandal in the incident was the withdrawal of the police from the scene of the incident under the instructions of the governor, despite the orders of the prosecutor to stay. He added, "I can’t understand why junior personnel can be charged in trying to overthrow the government and of being members of terror organizations, while all the involved senior officers remain free. They claim a lieutenant colonel, two majors and 17 junior officers were going to stage a coup? Who believes this?" The officer did, however, agree that if there is anyone among the detainees who had direct links to the Gulen movement, this should be proven and investigated, but not charged with membership in a terror organization and planning a coup.

Other gendarmes told Al-Monitor that work conditions have become unbearable because of political pressures. In many sensitive locations the gendarmes are caught between governors and prosecutors. The police and the MIT do not coordinate and the exchange of information between the security units has become dangerously minimal. While senior personnel and the gendarmes who abandoned the scene remain free, the arrests of those gendarmes who were carrying out orders have seriously undermined the morale and motivation of their colleagues.

The incident had one silver lining, however, as it illustrated once again that there is a serious discrepancy in collecting, coordinating and sharing intelligence information. In Turkey, the MIT, the police intelligence department and the gendarmerie intelligence is tasked with intelligence collection. In this regard, the retired intelligence officer said, "There is destructive institutional rivalry between those responsible for collecting intelligence. No doubt this rivalry played a key role in escalating the truck search incident into a crisis."

Although operating under the Ministry of Interior, all gendarmes are army personnel and subject to military personnel regulations and discipline; however, this will soon change and the gendarmerie will no longer be considered part of the army.

What does the chief of General Staff say to the arrests of the 17 gendarmes and noncommissioned officers on these extremely serious charges? A military statement said the Turkish army fully respects the legality and independence of the judiciary while it remains "seriously concerned with the protection of the rights of our personnel," thus implying that the military command will not actively interfere with the process.

"I retired just at the right time. These are difficult times for the gendarmerie and police in Turkey. If you implement the law, obey instructions from prosecutors and orders of your superiors, you can end up in court to be tried for planning a coup against the government or being a member of a terror organization. The best way to survive is not to see and try not to get implicated," the retired gendarmerie officer said.