Did trucks linked to Turkey’s National Intelligence Organization facilitate the smuggling of weapons to rebel forces in Syria? 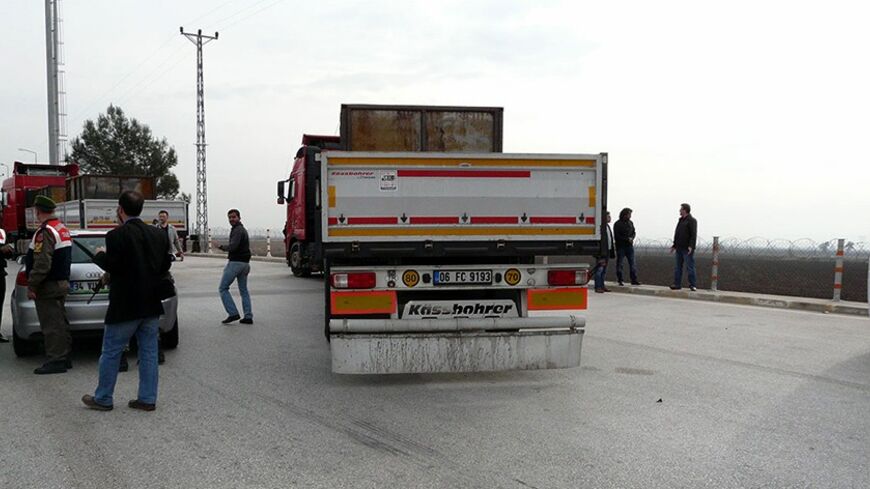 According to information Al-Monitor obtained from security sources, on Jan. 19 at 7:15 a.m., the prosecutor of Adana Anti-Terror Court instructed the Adana Provincial Gendarmerie Command to stop and search three semis.

Turkey’s National Intelligence Organization (MIT), which has bloomed as a parallel Foreign Ministry under Justice and Development Party (AKP) rule after years of keeping a low public profile, was again caught transporting weapons to Syrian opposition forces. After saving a suspicious truck from the prosecutors and gendarmerie on Jan. 1, when the government called it “a state secret,” MIT this time hit the headlines with seven semis reported to be laden with weapons. Security forces were able to search some of the trucks in an operation on Jan. 19 that was launched after a tip was received and the government was slow in intervening. Nevertheless, the local governor did not allow a detailed search on “state secret” grounds and the trucks were released.

Prosecutor persisted but it didn’t work

According to information Al-Monitor obtained from security sources, on Jan. 19 at 7:15 a.m., the prosecutor of Adana Anti-Terror Court instructed the Adana Provincial Gendarmerie Command to stop and search three semis.

Around noon, a security detail of 200 personnel stopped the semis with plates 06 DY 0393, 06 EY 2115 and 06 FC 9193 and an Audi A3 car accompanying them at Adana Sirkeli Motorway entry point. Eight drivers and other personnel in the trucks were detained. It was also discovered that there were two MIT officials in the Audi escort vehicle.

After explosives-detecting dogs gave appropriate signals, the prosecutor allowed steel containers in the trucks to be opened. In six metal crates, concealed among medical supplies, were mortar shells, rockets and various other ammunition. While the trucks were being moved to nearby Seyhan Town Gendarmerie Command for a detailed search, the trucks were blocked by MIT personnel from their Adana regional office. At that point, the governor, Adana Huseyin Avni Cos, the provincial police chief and the MIT regional director arrived at the scene accompanied by 200 policemen. Cos tried for one hour to persuade the prosecutor not to go ahead with the search but couldn’t. Then Cos wrote to the Ceyhan district governor and the Adana Provincial Gendarmerie Command, warning that the MIT was attached directly to the prime minister and searching MIT vehicles without the permission of the prime minister’s office would be an offense. The vehicles then were released under the governor’s instructions and continued on their way toward Syria.

According to information provided to Al-Monitor when the first three suspicious trucks were stopped, MIT personnel tried to save the other four trucks from searches but they, too, were stopped by the gendarmerie.

While the trucks once again were disappearing, the head prosecutor of the Anti-Terror Court said they could not give a list of items found because the investigation was confidential.

At the end of the day, the governor’s office of Adana issued the following statement:

“It was understood that in the three vehicles moving in the Adana-Ceyhan direction, there were MIT personnel doing their routine duties. After appropriate checks, these personnel left the location to continue with their routine duties.” The term “routine duties” used by the governor’s office only added to accusations that the MIT has been involved in field operations since the beginning of the Syrian crisis.

The new truck incident rekindled the debate on immunity of the MIT. Huseyin Celik, the deputy chairman of Erdogan's AKP, issued a public reprimand, saying, “This is a truck of the MIT. What is inside it doesn’t concern anyone. Who are these prosecutors working for? Stopping MIT trucks means not knowing your limits. The prosecutors who make such mistakes will be held accountable.” Celik, like Cos, said no MIT activity can be questioned without the prime minister’s permission.

According to legal experts, the rule that the prime minister’s approval is needed to investigate the MIT doesn’t accord the organization a blanket immunity. Experts say that a suspicious vehicle can be searched if there is likelihood of a crime, to collect the evidence and then a request for permission to investigate the MIT personnel is made. If this is not done, then the MIT is given liberty to commit crimes.

On Nov. 7, also in Adana, a truck owned by a private company was found to contain 933 rocket warheads after a tip was received about narcotics smuggling.