In an exclusive interview with Al-Monitor, Syrian Deputy Prime Minister and Minister of Foreign Affairs and Expatriates Walid Moallem said he proposed a plan for ending military operations in Aleppo last week in response to US Secretary of State John Kerry's appeal for a cease-fire there. 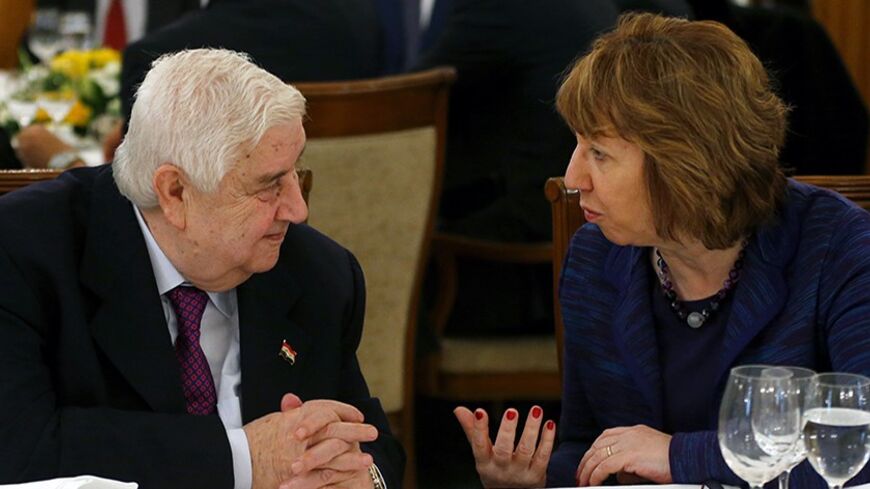 MONTREUX, Switzerland — Walid Moallem, Syria’s minister of foreign affairs and expatriates, said his proposal last week to halt military operations in Aleppo was in direct response to an appeal from US Secretary of State John Kerry for a “localized cease-fire” in Aleppo.

“I presented a plan for ending the military and security operation in Aleppo city, and I still wait for the response from the American side,” Moallem said in an exclusive interview with Al-Monitor.

Moallem, who led Syria’s delegation to the opening of the United Nations peace conference on Syria today, Jan. 22, in Montreux, Switzerland, and will lead the government in talks with the opposition in Geneva on Jan. 24, said he would give priority in subsequent discussions to so-called confidence-building measures such as local cease-fires, humanitarian relief and prisoner exchanges.

“We want to see how much this opposition is related to the armed group in Aleppo,” he added.

Moallem, who also serves as deputy prime minister, said today, “We will go on Friday to start the Syrian dialogue, bearing in mind that what we will see, the [Syrian National] Coalition (SOC), in fact, they are not the real representatives of the Syrian people.”

He said he would deal with the SOC “based on their acceptance of issuing a resolution countering terrorism.”

The Syrian foreign minister said he explained to UN Secretary-General Ban Ki-moon why addressing terrorism “will pave the way for [a] political solution, because it will narrow the gap.”

Moallem earlier said that any agreement reached in Geneva would need to be put to a referendum in Syria, and that subsequent negotiations should take place in Syria.

Moallem denied that the Syrian government has been involved in systematic torture of prisoners, as reported by CNN and other media outlets, based on the contents of a new report, calling the accusations “a big lie.”

He said Turkey’s “role in supporting terrorism is very clear,” asking how else foreign fighters could have gained entry to northern Syria.

The interview follows below:

Al-Monitor: In your speech today you said, "Whatever agreement is reached here is subject to a national referendum." Will there be follow-up meetings beyond the ones scheduled for Friday in Geneva, and how do you see the discussions proceeding on a political transition, including the role of a referendum?

Moallem: First of all, we will go on Friday to start the Syrian dialogue, bearing in mind that what we will see, the coalition, in fact, they are not the real representatives of the Syrian people. They are a bunch of people that have lived abroad, [that] through American, Qatari, Turkish and Saudi help, composed the coalition. This coalition is divided because some members refused to come to Geneva, some members wanted to be represented in Geneva.

On the ground, all of the armed groups issued a statement that this coalition is not representing them and they stand against the Geneva meeting. The national opposition parties in Syria issued statements that said the so-called coalition is not representing them. This fact will affect the course of the dialogue, because as a government we want to see most of the opposition parties, and some NGOs, to be represented in the dialogue. In this way, we can have deep dialogue about the future.

What we agree upon, it will go to a referendum.

Al-Monitor: But you are prepared to have these conversations with the representatives of the coalition who are coming Friday?

Moallem: Based on their acceptance of issuing a resolution countering terrorism.

Al-Monitor: Last week in Moscow you proposed a cease-fire in Aleppo.

Al-Monitor: And you presented plans for prisoner exchange and humanitarian relief. How much priority will you be giving these, what some have called confidence-building measures, in your upcoming talks?

Moallem: It is very important because the gap of confidence is huge. We want to see how much this opposition is related to the armed group in Aleppo, for example.

Second, Mr. [US Secretary of State John] Kerry himself in his joint conference in Paris with [Russian Foreign Minister Sergey] Lavrov [on Jan. 13] spoke about [a] cease-fire in Aleppo.

For that I presented a plan for ending the military and security operation in Aleppo city, and I still wait for the response from the American side.

Al-Monitor: So you proposed your plan in response to Secretary of State Kerry’s appeal for a localized cease-fire in Aleppo?

Moallem: Yes, bearing in mind that the United States has influence on this armed group.

Al-Monitor: Let me ask about the armed groups. You, today in your speech, accused some of the regional powers as being behind some of these armed Islamic terrorist groups in Syria, and as I understand it there are two major factions fighting in areas not controlled by the government: the Islamic State of Iraq and al-Sham (ISIS) and Jabhat al-Nusra, or the al-Qaeda-affiliated groups on the one hand, and then there is the Islamic Front, which is affiliated with the Free Syrian Army and the coalition, according to reports. How do you assess the state of play on the battlefield and who is behind these groups?

Moallem: I know well that the Islamic Front is composed by Saudi Arabia. Jabhat al-Nusra is supported by Qatar. ISIS, which is the Islamic State of Iraq and al-Sham, belongs to al-Qaeda, Ayman al-Zawahri.

Al-Monitor: And how do you see the battle between these forces?

Moallem: I can’t say who is winning or who is losing, because it is a battle between a group that hits and runs.

Al-Monitor: You said today in your remarks that the focus in Syria should be on stopping terrorism and those who support it, and you accused some in the room of having blood on their hands and you singled out Turkey. How do you believe that your message on this subject is being received, and how do you see that terrorism agenda being taken into account in the next stages of the Geneva process?

Moallem: Very good question. I am sure that it was not well-received from Turkey, based on the speech of their foreign minister, but the question is how these groups, which are thousands, came to north Syria. Are they arriving through an umbrella, or crossing the border between Syria and Turkey? They came by crossing the border.

Who encouraged them? Who financed their trip from Chechnya, from the Caucuses, from Turkmenistan, to Syria? These are important questions: Who armed them? Who gathered them? I am speaking about thousands.

So their role in supporting terrorism is very clear.

Al-Monitor: It has been said many times that the foundation of these talks and the Geneva communique is primarily about a political transition and not about terrorism. How do you think this appeal that you are making is received by the UN secretary-general, [the UN-Arab League Special Representative] Lakhdar Brahimi, Russia, others?

Moallem: With Russia, no problem, because the Russians themselves suffer from terrorism. From Ban Ki-moon, I met him and I explained to him why, in my opinion, this issue will pave the way for [a] political solution, because it will narrow the gap.

Al-Monitor: Secretary Kerry said in his remarks today that “we have to deal with reality here, we really do ... that means that Bashar al-Assad will not be a part of the transitional government.” What is your reaction to his remarks?

Moallem: I told him directly my reaction. I addressed him in my reaction [in my speech] and I meant what I said.

Al-Monitor: How do you think the other conveners reacted to his remarks?

Al-Monitor: On Iran, Iran was invited, then not invited. Clearly you support Iran’s participation in the process, were you involved in these consultations?

Moallem: No, it was a bilateral issue between Iran and the secretary-general, and it is really a shame to invite somebody and the next day to tell them no.

Al-Monitor: Do you see Iran playing a role in the process in the future?

Moallem: Well, Iran is a major player in the region, and it has a very important position. So if they want a solution, really, they must bring Iran in.

Al-Monitor: The past few days the media have been reporting on a study by some distinguished international lawyers that includes accusations of systematic torture by your government, including graphic photos, which were smuggled out by a photographer who said he worked for the security services. This report comes in the context of other reports about violations of human rights by the Syrian government. Could you respond to this charge and the broader issue of human rights?

Moallem: Well, first of all, before the … Gulf council ministers met in Kuwait, and they agreed in their secret agreement to have united efforts to support the coalition, politically, through the media and legally.

Second question mark: If you want people to believe you, you make your lie very big. If we have 11,000 prisoners in Syria, I assure you this crisis is ended. This number is very much exaggerated. And why kill them, why torture them? They are coming voluntarily to speak in front of Syria TV to say who financed them, who supported them, so we don’t need to torture them. So it is totally a big lie. You can, from your intelligence, question why now during the conference?

Al-Monitor: But what about the charges themselves? I mean, the specifics of the case.

Moallem: It is untrue. I assure you.