In an exclusive interview with Al-Monitor, Qatari Foreign Minister Khalid bin Mohammad Al-Attiyah calls for a unified Syrian opposition and describes the plight of the Syrian people as "unprecedented." 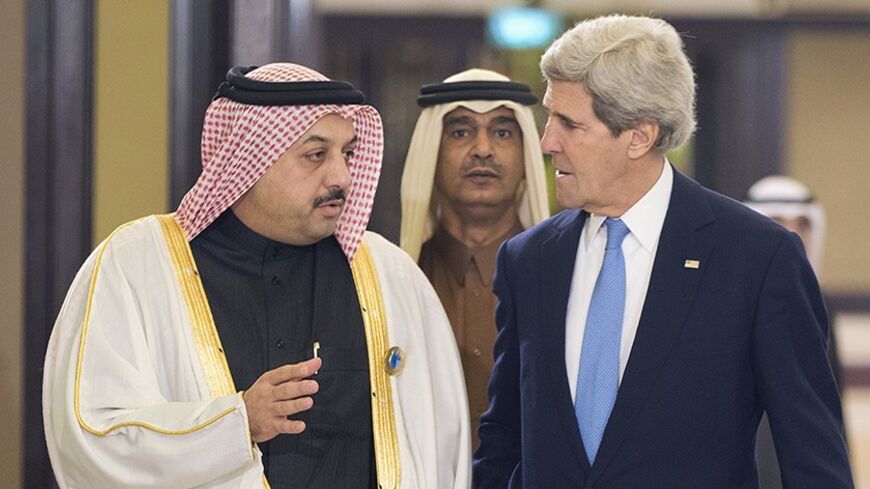 "The only thing which made the organizer of this conference withdraw the Iranian invitation is because [the government of Iran] didn’t announce that they acknowledge Geneva I. But still, I think Iran has a crucial role in solving this issue," Attiyah said in an exclusive interview with Al-Monitor at the Jan. 22 opening session of the high-level segment of the United Nations peace conference on Syria.

Attiyah, a former fighter pilot in the Qatar Air Force, advocated an “inclusive” approach to dealing with Iran, despite differences over Syria, but added, “I don’t blame Saudi Arabia for their worrying” about Iran.

Attiyah made a strong case for Gulf Cooperation Council (GCC) unity, including in the field of security. “You cannot divide the GCC on the security issue,” Attiyah said.

Attiyah called on Syrian opposition groups to put aside their differences and back the Syrian National Coalition (SOC), led by Ahmad Jarba. “Today we need everyone to stand behind them,” said Attiyah.

“If the regime stopped what it is doing with the Syrian people, and gives them their self-determination and what they wanted to have, their freedom, justice, I think the terrorists will fade out of Syria,” Attiyah said.

“If you know the Syrian people, they are the most moderate people and their mosaic is unbelievable. They are the oldest people on earth, and you cannot separate their mosaic because of stereotypes about radicals. This cannot happen in Syria. If Bashar lets go of his iron fist on his people, Syria can find its way to prosperity.”

The interview follows below:

Al-Monitor:  Iran was invited, then disinvited, for not formally accepting the Geneva I protocol. I understand the issue of acceptance of the Geneva communique for this conference, but, putting that aside, do you believe Iran could play a positive role in Syria? I know your relationship with Iran is a vital one for Qatar. How do you assess the changes in Iran’s policies under President Hassan Rouhani, and the Joint Action Plan with the P5+1 on Iran’s nuclear program? Please comment in the context of Qatar-Iran relations and what they mean for the region.

Attiyah:  Let me start with this. Iran is a very important figure on this equation, and I think that Iran can play a vital role on this file. The only thing which made the organizer of this conference withdraw the Iranian invitation is because they didn’t announce that they acknowledge Geneva I. But still I think Iran has a crucial role in solving this Issue.

Qatar and Iran relations have always been a good relationship. Iran is our neighbor, and from the earliest days we have been encouraging to solve this nuclear issue with Iran amicably and peacefully, because we are against any act of aggression on any of our neighbors.

We live in the same region, and we believe in the rights of the country to have their peaceful use of nuclear technology. We welcomed the interim agreement between the P5+1 and Iran. The only thing is we try to always encourage our allies and colleagues that if there is any arrangement in the region, they should involve us, at least keep us in the picture.

Honestly speaking, we don’t fear Iran being our neighbor, we have a good relationship with them. We have differences for sure, one of our differences with Iran is the Syrian case. We have our position, they have their position, but that does not mean this should reflect on the other side of the relationship, which we always encourage, and the Iranians are doing so as well.

We have recently had a visit by [Iranian Foreign Minister Mohammad Javad] Zarif to Qatar, and I am planning to have a visit soon to Iran. We intend to keep the relationship in good shape. We believe in dialogue.

Al-Monitor:  It seems that Saudi Arabia has taken a tougher line on Iran. There has also been mention from Saudi Arabia of a GCC military force partly to counter Iran. How do you feel about that?

Attiyah:  Always in Qatar our approach is toward inclusion. We always talk about including everyone in any issue which concerns the region. I don’t blame Saudi Arabia for their worrying. Syria is a very, very crucial file. I say this in the beginning that any arrangement in the region, engaging the GCC, putting them in the loop, giving them updates, then this will reduce the fears and reduce the suspicion.

The more the allies engage us, the more they give us more information on what is going on, if they think aloud to us, if I may put it in this phrase, they reduce our fears. And when I say our fears, I say the GCC.

Al-Monitor:  What are your expectations for the Syrian negotiations which are to begin on Friday? Is it your view that the political transition should not include President Bashar al-Assad, as US Secretary of State John Kerry said, or should this matter be left to the negotiations between the Syrian parties? How to reconcile this issue of a transitional government by “mutual consent”? What should be the role of the confidence-building measures: localized cease-fires, humanitarian relief, prisoner exchanges?

I wish the Syrian regime would take a pause and think about the people in Syria. The devastating situation of the Syrian people is unprecedented. Something I think that has never happened in mankind that people get cornered until they eat cats and dogs because of hunger. So I hope that they take this chance. This is a window of opportunity for the regime, in my opinion. He should grab it, take it and continue this negotiation with the opposition.

But for the transitional government, it is not for anyone to veto, so this is maybe the people cannot distinguish between a mutual consensus but not on this issue, because this issue is clear.

Al-Monitor:  You heard the opening speeches today, including the Syrian foreign minister accusing countries in the region of sponsoring terrorism in Syria. Should the rise of terrorism in Syria and the region — including Iraq and Lebanon, and we saw the recent bombing on the border crossing in Turkey — be part of the discussion on Syria? Can regional countries do more to crack down on foreign fighters and terrorists in Syria?

So, in this case, if we can answer this question, we know that if the regime stopped what it is doing with the Syrian people and gives them their self-determination and what they wanted to have, their freedom, justice, I think the terrorists will fade out of Syria.

If you know the Syrian people, they are the most moderate people and their mosaic is unbelievable. They are the oldest people on earth, and you cannot separate their mosaic because of stereotypes about radicals. This cannot happen in Syria. If Bashar lets go of his iron fist on his people, Syria can find its way to prosperity.

The Syrian people are a people who used to export all luxurious good things to the neighboring countries. You name it, from chocolates and upward to textiles and industrials. They are a people of life. Who made them carry weapons to defend themselves? They started six months peacefully.

I remember the boys in Daraa who had been shot at and killed their families because they did some childish move, and then they were punished with death. I remember the small young girl in Homs. People tend to forget these things.

In Qatar we don’t want to create this, we don’t want to go with the wave. After going half-way we forget what has started this and start to think about where are the terrorists in Syria that we have to fight, and we forget everything that has happened to the people. Today I believe roughly the death is 400,000. The United Nations has stopped counting after 150,000.

The file and the report, which has been released by CNN and The Guardian, is self-explanatory. These are top-notch pathologists and lawyers, international prosecutors. This is the only lawyer who prosecuted head of states. They looked into the file, they examined it and the result was it is a genocide.

Attiyah:  Today we need everyone to stand behind them. Today is the day, if you may call it, the day of judgment. Everyone should support them, support Jarba, support his temporary government. There is no space now for maneuver or for getting one side. We have to support them today, full stop. Whatever internal politics happens to the collation, it is up to them. Some of them have their own reasons, some of them have their one good reason maybe, some of them lost faith in the international community. They don’t want to be disgraced by their people and put down by the international community. So they tried us, and we failed them. Period. They know the feeling. They tried so many times to reach out and save them from this brutal machine and we failed them.

Al-Monitor:  Are you optimistic or pessimistic as the talks begin?

Attiyah:  I am always optimistic, but as I told you, if you see the speech of the regime, its first 20 minutes, it has its answer. The guy cannot shorten his speech, he has to go by the bible, do you think that he can change his position alone?