In an interview with Al-Monitor, Salem al-Meslet, vice president of National Coalition for Syrian Revolutionary and Opposition Forces, calls for the "London 11" group to relieve the humanitarian crisis in Ghouta. 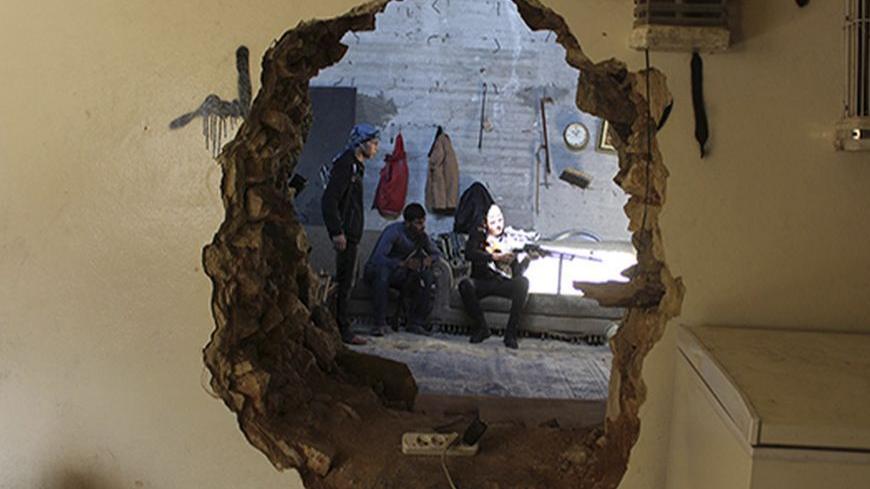 A Free Syrian Army fighter aims his weapon as he is seen through a hole in a wall in Aleppo's Karm al-Jabal district, Oct. 21, 2013. - REUTERS/Molhem Barakat

LONDON —The meeting on Tuesday, Oct. 22, between the Western-backed Syrian opposition coalition and foreign ministers from 11 Friends of Syria states was positive, according to opposition and diplomatic sources.

In an interview with Al-Monitor, Salem al-Meslet, vice president of the National Coalition for Syrian Revolutionary and Opposition Forces, called Tuesday's event in London a “good meeting," although he did not confirm that the opposition would attend Geneva.

Meslet said the western powers need to “do something” about the siege on the Damascus suburb of Ghouta “before we go to Geneva.”

Establishing humanitarian corridors, particularly to Ghouta, was one of the key topics discussed during the London talks, according to Meslet, who said he received assurances from US Secretary of State John Kerry that “he will work on it.”

Meslet reiterated statements made by UK Foreign Minister William Hague that President Bashar al-Assad had no place in Syria’s future, stating to Al-Monitor that “we want him removed before the elections.”

Assad hinted in an interview with Al-Mayadeen on Monday that he may run in the 2014 presidential elections.

Kerry took a more cautious position after the London talks, saying “it’s not our decision to make” concerning Assad remaining in power, despite the 11-point communique issued after the meeting stating that Assad “will have no role in Syria.”

Any signs of a rift between Saudi Arabia and the United States, as reported in the media, were not apparent at the London meeting. “[The] Saudis were constructive,” according to the Western diplomat, while Meslet said the two countries spoke “the same words.”

Division still remains, however, on the issue of Iran’s participation in Geneva. Hague told BBC Radio 4 prior to Tuesday’s meeting that Iran could play a role in Geneva.

Meslet firmly rejected Tehran’s attendance, saying, “there is no way we can accept Iran.”

The coalition leader said that Saudi Arabia, although it did not mention it at the meeting, also objects to Iranian participation in Geneva. The Western diplomat added to doubts of Saudi approval for Iran’s role at Geneva II, saying that the “Saudis are skeptical of Iran, they don’t see any evidence of change.”

“Iran needs to demonstrate commitment to a peaceful settlement to be invited to Geneva II, at least by unequivocally committing to Geneva I,” the source added.

Al-Monitor: Secretary Kerry said on Monday that “there are plenty of qualified people within the opposition in Syria – not necessarily fighters, but people who are opposed to Assad who run a business or a hospital or who have a great distinguished career and have been part of building the fabric of a secular society of Syria. And there are people who are qualified to be able to help manage the future affairs of Syria.”  I know Coalition leaders have been in Syria recently.  How do you characterize your ties with internal Syrian opposition figures?  How is this affecting the Coalition’s calculus on Geneva II?

Meslet: If we decide to go, because first we have to go back to the [Coalition’s] general assembly as there is a meeting at the beginning of next month and there they will make a decision, as we can’t make it on their behalf. There are some worries inside the Coalition because of what’s happening now in Syria, like what’s happening in the Damascus suburb of Ghouta. This regime is not letting in food, water to those people. We requested the Friends of Syria, the 11 ministers, to do something about it before we go to Geneva.

It’s very important that we go as one team to Geneva, and that’s what Kerry mentioned today. He said, “you have to choose people to be with you there,” and he did not really mention any names. This is the decision of the opposition to form their delegation.

Al-Monitor: Could you provide an update on the reports of starvation in the south of Damascus? What is being done to help people there?

Meslet: Nothing has been done yet. Even from the Coalition, money was sent to them, they returned it, they said there is nothing we can do with it, there’s nothing to buy. It’s a disaster there. The situation is tens of children dying every day, and you can see that on TV. We cannot do anything, this has to come from the US and the UK, they have to apply pressure not on Assad, but on Russia.

Today it was a good meeting, they promised to do something. We heard really good speeches from all ministers. Kerry today before he left said he promised he will work on it and we have to do something from now until Geneva to help those people.

Al-Monitor: On Oct. 15, the Coalition reiterated its support for the OPCW mission, but noted that you have yet to be contacted by the Director-General of the OPCW.  Could you comment more specifically on any difficulties you might see in the OPCW carrying out this mission, or that this could be a problem for the opposition, as Assad, until now, seems committed to cooperating?

Meslet: For him [Assad], he came up with the solution just to escape the strikes that were supposed to take place. I believe Assad and Russia are just buying time, I don’t think he will lead these inspectors to all places where there are chemical weapons because some are hidden in Syria, and when he felt he was really threatened, part of it went to Lebanon, to Hezbollah. If they inspect, they should inspect in Syria and in Lebanon.

Al-Monitor: Do you have evidence of Syria transferring chemical weapons to Hezbollah, and if so, will you release such evidence to the public?

Meslet:  I believe that in the hands of our people there [in Syria], there is some proof about this. But here people are focusing on one thing, they don’t want to talk about others. Iran and the US are getting closer than before, so there was nothing mentioned [at today’s talks] about Hezbollah because Hezbollah is part of that. The only concentration was on what’s in Syria and only the chemical weapons, and this is the problem.

Al-Monitor: UN Security Council Resolution 2118 and UN Special Envoy Lakhdar Brahimi are fairly clear that neither side should impose conditions on participating in Geneva II.  Yesterday Secretary Kerry said, “The situation on the ground is irrelevant to the question of the implementation of Geneva 1.”   The Coalition position is “ [We] will participate in the proposed Geneva II conference when the military balance has changed and the regime has demonstrated a willingness to transfer power to a transitional government with full executive powers.”  Is the Coalition reconsidering its position about the military balance as a condition for participation in Geneva II?

Meslet: If it’s not equal on the ground, then I believe he [Assad] will implement his terms. We talked today about two main things, which are the Free Syrian Army and the humanitarian corridors. These are important. Forget about the military matters, remember the people who are suffering in Syria. If they can find a solution [to the Damascus suburb siege] within this week or in two weeks, I think people will change in mind, I think some mentalities, some tough people, they will agree on going to Geneva when they see proof that the Friends of Syria managed to solve the problem of people who are starving to death.

Today they did not mention this [about a military balance], we concentrated on humanitarian issues.

Al-Monitor: President Assad has said he has not decided yet whether he would run for re-election or not in 2014. Today the United States and the United Kingdom agreed that Assad has no place in Syria’s future. What is the Coalition’s position on the 2014 elections? Will you give elections full endorsement if Assad doesn’t stand?

Meslet: To go to Geneva is to discuss the main issues, and the main one is the removal of Assad. There is no way of forming a transitional government with Assad in power. People will not accept that, it is not acceptable. About 120,000 people have been killed by Assad, how can these people accept him as a president again? He can say anything he wants, but this will never happen in Syria.

We want him to be removed before the elections. A ruler who should be protecting his own people is killing his own women and children, how can we see him in power?

Al-Monitor: There have been media reports about a rift between Saudi Arabia and the US, particularly over Syria. How did this impact the talks today, and how will it impact the Coalition’s ability to negotiate at Geneva II?

Meslet: The Coalition message today in the meeting was: How can we accept Iran as part of Geneva when we have 60,000 Iranians, like Hezbollah, that are in Syria? Even Saudi Arabia will never agree on Iran taking a place in Geneva. They did not mention it today, but this is a clear decision from Saudi Arabia, and this is our decision also. At the end, this is a Syrian issue, and we have to know who will be there. We mentioned people from the regime will be there, but there is no way we can accept Iran.

If they’re invited, I think it will be difficult for the Coalition to attend.

The Americans and the Saudis had a talk last night, and today they showed the same words, we heard from them the same thing. They’re supporting the Syrian people, they know the suffering and they want to solve this problem, but they said it’s important to go to Geneva. I believe today the 11 members, they reached an agreement and they had a few points of what should be done in Geneva.

Antoun Issa is a news editor for Al-Monitor based in Beirut.