The National Coalition of Syrian Opposition and Revolutionary Forces is meeting in Istanbul to consider participating in the Geneva II peace conference. 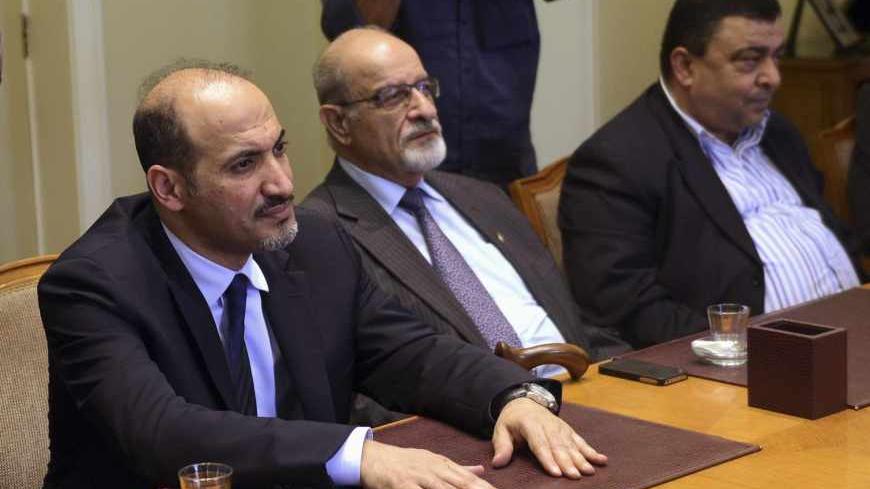 ISTANBUL — The Syrian National Coalition (SNC) will either refuse to attend the Geneva II conference and lose the support of the international community, or agree to attend and lose Syria — that is, the armed opposition. The meeting of the 114-member SNC in Istanbul opened Nov. 9  with such a vital question. This is perhaps why the majority feels it is best hold off on such matters instead risking losing one side. As such, this meeting is turning out to look like yet another of the kind the armed groups fighting in Syria deride as “eating, drinking in hotel rooms and deciding on our behalf.”

Only this time, one can feel the American pressure on the parties to meet in Geneva. That may explain the massive media coverage of the Istanbul meeting. The agenda of the meeting includes, in addition to Geneva II, whether to accept the “transitional government” under Ahmed Toumeh and the Kurdish National Council (KNC) as members in the SNC.

According to information Al-Monitor gathered, the structure of the SNC, which has been rattled by constant turbulence, was discussed before tackling more critical issues. There was also discussion of the status of groups which were SNC members but had lost their field forces, and those who have expanded their forces and are now demanding more seats in the SNC.

Three possible courses for the opposition

The focus of the entire quorum is whether to go to Geneva, and if so, under what conditions. Abdulbasit Seyda, the former head of the Syrian National Council, assessed the situation for Al-Monitor: “There are three attitudes regarding Geneva. The first group categorically rejects going to Geneva. The second group says, 'Let’s go.' The third group says, "Let’s go, but …'"

The crux is hidden in this "but." Seyda thinks all three groups want a political process that will guarantee Assad’s departure. That is their precondition. But armed groups that believe that Geneva will not serve any other purpose than granting time to Assad and those in the civilian wing who oppose going to Geneva want to first see a mechanism that will ensure regime change.

In the press conference after the first session, SNC spokesperson Khalid Salih reflected on expressions of sincerity expected from Assad, saying, “He can implement a cease-fire, lift blockades or release the detainees. But he is not doing any of these."

Some are concerned with the likelihood of the opposition sitting at the negotiation table with a weak hand, as the field conditions are turning against them. The most significant challenge comes from the armed groups that see going to Geneva as treason.

"Military wing can be persuaded"

Khaled Hodja, the SNC's spokesperson in Turkey, was more optimistic about the position of the military wing. He said, “If there is perspective of Assad leaving, the military wing can be persuaded. Don’t be obsessed with their defining going to Geneva as treason. We can provide Assad with a secure exit. You know the previous SNC head, Moaz el Khatib, had said, ‘Assad and his family can leave with 400 people.’ Nobody here will agree to Assad staying on. But there is a new situation.

"Before, we were talking about going until the end, but a new framework was drawn at the Oct. 22 London meeting. It was recognized that this issue will not be solved with arms. The London meeting confirmed this reality. It was also underlined that in such a framework, Assad cannot have a future in Syria. The United States, Saudi Arabia and Turkey all backed this framework. We can go to Geneva within that framework. But Russia is not accepting it."

Russia says that the Geneva Accord reached in 2012 had decided nothing about Assad’s fate, and the Damascus regime says Assad will keep his post until the end of his term and could be a candidate in 2014. Both reject "Assad must go” as a precondition.

To entice the military wing, the SNC had reserved 15 seats for the Free Syria Army (FSA). But the FSA is losing ground against al-Qaeda and Salafist groups. Thirteen groups, three of them FSA affiliates, on declared Sept. 24 that they did not recognize the SNC. On Sept. 29, the Islamic Brigade under Saudi Arabian guidance, along with 50 other groups, most of which were in the FSA, declared the establishment of the Islamic Army. Therefore, it is not realistic to say that the seats allotted to the military wing in the SNC represent the field today. Those in the field accuse the "transitional prime minister" of not doing anything in the liberated areas. Many here, including Hodja, say the military wing’s objections are justified.

Another idea bandied about is to bring together all opposition groups, whether they are members or not, under the SNC structure as the Core Group of Friends of Syria desires. Any real action on this principle seems impossible at the moment. Syrian Kurds, the Coordination Council for Democratic Transformation and opposition groups from within Assad’s national reconciliation government don’t fit in this structure.

An agreement signed with the KNC, although not yet official, at least offers the possibility of having some Kurds at Geneva. But the KNC has problems with not being effective on the ground and deficiencies in representation. The Democratic Union Party (PYD) that now controls most of Rojava (Syrian Kurdistan) is slated to go to Geneva as the Kurdish Supreme Council through a path opened by Russia. The future of the KNC within SNC is totally ambiguous. Kurds were not given the guarantees they wanted that “Arab” would be removed from the official name of the state, now the Syrian Arab Republic. The political accord so far only provides for Kurdish identity and recognition of their culture. Kurdish Seyda, however, has a positive outlook: "Kurds, except the PYD, accept going to Geneva as part of [belonging to the] SNC. To overcome the Kurdish objection to using 'Arab' in the national name, they must know that in drafting of the 1950 constitution, there was a proposal to revert to the designation Republic of Syria. A new Syria has to embrace all ethnicities. We didn’t ask for a federation anyway — that won’t be accepted. Here we are not discussing all those matters, but the number of seats to be allotted to the KNC within the SNC."

Not only the Kurds, who were allotted 11 seats, but Turkmens, too, want to be satisfied. Abdurrahman Mustafa, a member of the Syrian Turkmens Assembly, told Al-Monitor they don’t want to be spoilers for Geneva conference, but they were nevertheless not satisfied. He said, "Our concern is the future of Turkmens. They gave us four seats even though we have a population of three million. We want 15 seats. Recognition of our identity and guarantees of our rights are crucial. They have set up a commission to study our demands, but nothing has come of it yet."

Iran’s participation in Geneva II is one of the most vital issues of the Istanbul meeting. The general trend I detected is this: If Iran is going to attend, then it must sit on the other side of the table, because it is fighting in Assad’s ranks. But if it withdraws its forces from Syria, then it can participate as an independent party.

The US intention to involve Tehran in the Syrian solution process, in addition to launching its own dialogue with Iran, is placing heavy pressure on the opposition. SNC President Ahmad Jarba’s description of Iran as an "occupier" is attributed to his close relationship with Saudi Arabia.

The role of Saudi Arabia is another issue for discussion. The opinion forming in Istanbul is that the United States and Saudi Arabia don’t really want regime change in Syria. One SNC member made this assessment: "None of the Gulf countries want a regime change. Assad’s departure doesn’t mean regime change, and that is why they are able to ask for Assad to leave. The creation of a free Syria will affect the Gulf countries. Although they favor a Sunni regime in Syria, the next regimes in the Gulf will either be Shiite heavy or with Shiites as partners to power. The United States and the Saudis simply expanded the SNC with new members."

The same member said that Saudi Arabia is impeding the Geneva II talks in retaliation for US rapprochement with Iran. For the Saudis, the SNC has become an arena to settle scores with the United States. He added: "The wing that is against Geneva [II] is under Saudi influence. There are 15 of them. But the general sentiment is not to challenge the international community. Making a decision now is risky. We say we must first persuade the military wing. We think the military wing did not fully grasp the framework drawn up in London. We favor deferring making a decision."

As a result, nobody is hopeful for tomorrow. The assessment of an SNC member who has been with the opposition structure from the outset is foreboding: "We said this issue will be over with in two months, in six months, one year. Now it is already three years. For me, it will go like this for 15 more years.''