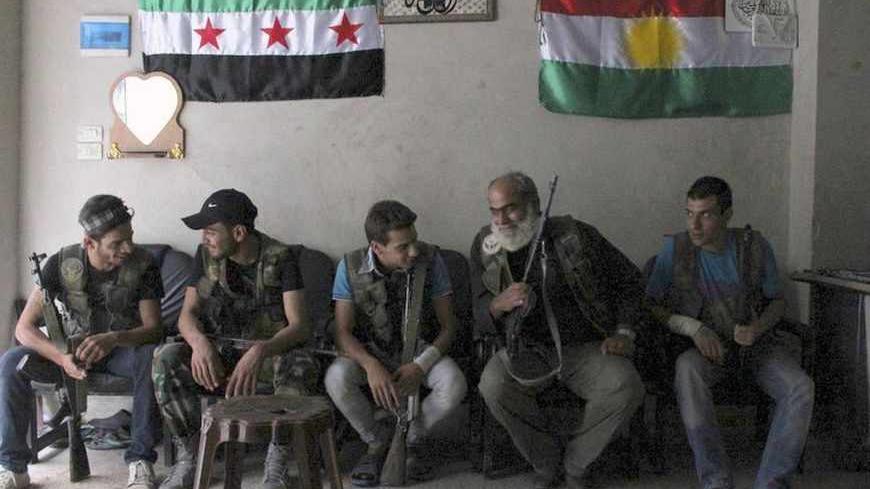 Clashes broke out in Aleppo between Kurdish armed groups and Islamist rebels on July 28. The Kurdish Democratic Union Party (PYD) saw them as proof that Turkey continues to support rebel offensives against Kurds, but Ankara denies the assertion. Moreover, the group claims that ethnic cleansing has been carried out against Kurdish civilians, but Syrian rebels reject the allegation.

The July 28 clashes took place in Kurdish-populated areas of Aleppo. Social media groups and websites affiliated with the PYD quickly uploaded to Twitter, Facebook, and Kurdish news websites images of alleged massacres taking place. Even Turkish media critical of the Ankara government quickly picked up the story, although most of the pictures and video footage were of civilians killed by Assad’s forces in the past in other parts of Syria.

For some Kurds, the events reminded them of the campaigns against them carried out by the Iraqi regime under Saddam Hussein. At least 100,000 Kurdish civilians were killed in the 1980s in Iraq.

The Kurdish Unity Party, one of the fiercest Kurdish critics of the PYD, suggested that 400 Kurds had gone missing in Tel Hassel or Tel Aran, and 19 were killed. Many of the deceased reportedly had relatives in Kurdish armed groups.

“In the call to prayer, they call for killing Kurdish people. … Now the fighting is like ethnic cleansing of Kurds by the Arabs,” Zara Ibrahim, a representative of the Unity Party in London, told Al-Monitor.

The Free Syrian Army (FSA) says it is only against the Kurdistan Workers Party (PKK) and its affiliates, such as the People’s Defense Units (YPG) and Jabhat al-Akrad. They accuse the PKK of reneging on earlier agreements and of helping President Bashar al-Assad.

Abdul Jabbar al-Oqaidi, the head of the FSA’s Aleppo Military Council visited Tel Aran and Tel Hassel on Aug. 3, as can be seen on YouTube, and spoke with Kurdish civilians, to assure them the FSA is only opposing the PKK. Moaataz Abu al-Waleed, a council spokesperson, told Al-Monitor, “Our problem is just with the PKK and the PYD, not civilians. They work with Bashar al-Assad and kill FSA fighters.” He confirmed that Oqaidi’s visit was meant to “clarify the FSA position.”

Not all the Kurds, of course, fight for or are allied with the PKK. A small Kurdish FSA group, the Syrian Kurdish Revolution Council (Komala), fights against it. “In any war, civilians are killed. That’s normal, but we don’t accept that. We in Komala … try our best to stop that,” Azad Botani, a Komala media coordinator told Al-Monitor.

Many other Kurds, including anti-PYD political groups, however, think the war is aimed against Kurds. They do not like that the main Syrian opposition body, the Syrian National Coalition, and other armed groups, do not accept any Kurdish self-governance apart from equal citizenship within the Syrian or an Islamic state. “We don’t want a Islamic state, nor a Kurdish state, we want a Syria for all,” said Waleed.

Jwan Ali, a foreign-based representative of the Union of Kurdish Youth Coordinators, sees the fighting as a war against Kurds, despite that he is from the city of Amuda, where civilians were allegedly killed by the YPG on July 27.

“The PYD sometimes suppresses youth activists, but when there is war against Kurdish cities with Islamic extremists, we are all together, because we are sure they [Islamists] are aiming for the whole Kurdish area,” Ali said to Al-Monitor. “We do not accept an Islamic state. We know it’s not about the PYD or that the PYD is with the regime. They are just coming to control the Kurdish areas and suppress the Kurds.”

Turkey so far has not responded directly to the claims that Kurdish civilians were killed in Aleppo, but Foreign Minister Ahmet Davutoglu warned the Kurds on Aug. 5, “Any cooperation to be done with the Syrian regime would cause problems for the Kurds.” His statement might be received negatively by the PYD, whose leader, Salih Muslim, visited Turkey in late July at Davutoglu's behest.

Some in Turkey saw Muslim's visit as a fundamental policy change given Ankara's previous support for Islamist groups. Davutoglu had said on July 25 that he considers the kidnapping and killing of civilians by Islamist groups as a “betrayal of the Syrian revolution.” One Turkish columnist even suggested that Turkey would extend aid to the PKK.

PYD officials, however, content that Turkey has not made any alleged U-turn in its foreign policy. Shervan Ibrahim, a PYD official involved in trying to build bridges between the PYD and Turkey, says that nothing has changed. “We expected that Turkey would take good steps, but so far nothing has changed. They promised us to let aid enter Syria, but they didn’t allow it when we brought aid to the border.”

Kurds from other political organizations also think that Turkey is supporting offensives against the YPG in Syria, and in doing so it is killing two birds with one stone. “They make PKK guerrilla’s leave Qandil and they fight in Syria. Why not? They will support these groups,” said Zara Ibrahim, the Unity Party spokesperson.

The PYD was especially suspicious about a meeting in the Turkish city of Gaziantep on July 26 of 70 FSA commanders, who spoke out against Kurdish autonomy. The meeting included FSA commander Oqaidi who later in a video in Aleppo said, “Kurds are our brothers, but we have to exterminate PKK fighters.”

Ufuk Ulutas, director of foreign policy studies at the SETA Foundation, Washington, DC, and who was at the meeting in Gaziantep, told Al-Monitor the gathering was aimed at promoting unity among the FSA and Islamist groups and coordinating offensives.

“Turkey puts a strong barrier between themselves and al-Nusra and the Islamic State of Iraq and al-Sham [ISIS, al-Qaida (AQ) affiliates]. There is no reason for Turkey to support al-Nusra. Turkey is distant from their ideology and politics,” Ulutas said. He added that there are suspicions among the FSA that the ISIS actually works with the regime and Iran.

In the meantime, there was talk of negotiations between the Syrian National Coalition (SNC) and the Kurdish bloc of the Kurdish National Council (KNC). Moreover, the KNC also met with members of the Syrian Muslim Brotherhood in Istanbul.

Abdulbasit Sieda, a Kurdish SNC member, proposed avoiding “the language of mobilization in dealing with the armed conflict between YPG and AQ-affiliated battalions" and suggested that a neutral FSA force separate the two sides. Kurdish officials see the proposal as unrealistic, since the neither the FSA nor the SNC control al-Qaida affiliates.

Aymenn Jawad al-Tamimi, a Shillman-Ginsburg Fellow at the Middle East Forum, agrees. “The conflict has escalated too much now to bring in a mediating party. If the dispute had just been confined to Ras al-Ayn over local issues, mediation could have been easily achieved. But this all goes well beyond Ras al-Ayn now.”

Regardless, secular FSA brigades say they do not want to fight against the PKK, only against Assad. FSA spokesperson Waleed said, “When the PKK stops this war, we don’t have any problem with the PKK. Our fight is with Assad.”

Istanbul-based Kurdish journalist Barzan Iso thinks there is no neutral force to mediate. “Nusra is supported by most of the radical Islamist groups, and the FSA groups are very weak. Al-Nusra did a genocide against the Kurds, so the Kurds wouldn’t accept any agreement with them.”