US follows Russia and Iran in criticizing jihadist attacks on Syrian Kurds. 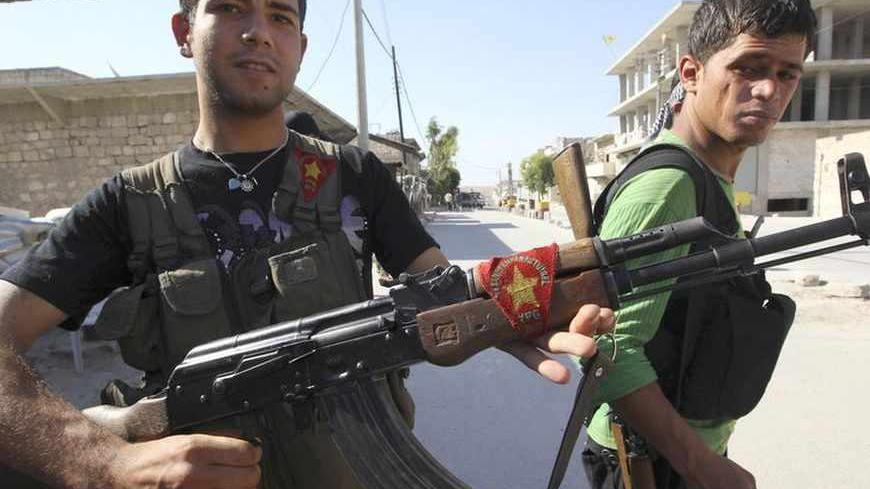 A Kurdish fighter from the Popular Protection Units (YPG) shows his weapon decorated with his party's flag, as a fellow fighter looks on in Aleppo's Sheikh Maqsoud neighborhood, June 7, 2013. - REUTERS/Muzaffar Salman

The US State Department condemned the attacks on Kurdish civilians by groups affiliated with al-Qaeda in the countryside of Aleppo on Saturday, after Russia Foreign Minister Sergey Lavrov criticized the UN Security Council for being "reluctant to condemn terror attacks in Syria" on Wednesday, in a reference to the silence of Western countries over the alleged killing of civilian Kurds in Syria.

Fighting erupted on July 16 between Kurdish armed groups and rebels fighting for Islamist groups affiliated with al-Qaeda and the Free Syrian Army (FSA) in northern Syria.

On July 29, positions of the armed group, Jabhat al-Akrad (the Kurdish Front) in the towns inhabited by many Kurds in Tel Aran and Tel Hassel were attacked by FSA and Islamist groups. Jabhat al-Akrad was accused of working with the Kurdistan Workers Party (PKK), although it fought under a FSA banner before.

Moaataz Abu al-Waleed, a spokesperson of Aleppo’s FSA Military Council, told Al-Monitor, “Liwa Jabhat al-Akrad is a big problem. … We discovered they work with the PKK, before the fighting, they worked with the FSA.”

In a statement, the Kurdish Democratic Union Party (PYD), which is close to the PKK, contended that hundreds of Kurdish civilians were killed in the city, although the FSA and Jabhat al-Nusra, affiliated to al-Qaeda, deny they target civilians.

“There are confirmed reports that in both towns civilians have been subjected to ethnic cleansing and massacres by terrorist armed groups,” the PYD said in a statement.

The PYD has been critical of Western support for the FSA.

“There is no support neither physical nor moral for the Kurds in Syria, and on the contrary, the West supports these groups with weapons to beat the system, but these weapons are used to exterminate the Kurds,” said Ahmed Haj Mansur, a PYD official in London.

Last Friday, Kurdistan Regional Government President Massoud Barzani said in a letter that if “such reports are confirmed, the Kurdistan Region would do all it can to protect Kurdish civilians in Syria.”

Reports suggested that at least 19 civilians were killed, and 400 Kurds were missing. This didn’t receive a lot of attention until Iran’s TV channel Al Alam picked it up on Monday, which followed reports by Russian state media and statements from Russian officials that condemned the Syrian opposition and the policies of the West against Assad.

Both Iran and Russia that support the regime of Bashar al-Assad have an interest in weakening international support for the opposition fighting against Assad by highlighting the presence of groups linked to al-Qaeda and use the targeting of minorities by the armed Syrian rebels against the West.

On Friday [July 9], the head of the Syrian National Coalition (SNC) Ahmed Jarba tried to take away Western fears of extremist groups by announcing a plan to form an army of 6,000 fighters to fight against warlords and extremist groups.

The Russian FM Lavrov said, that “We're shocked with reports saying about 450 peaceful Kurds, including 100 children, were slaughtered in the north of Syria." Although even the PYD didn’t say that many Kurds were killed.

The letter also spoke of the thousands of villages in Iraqi Kurdistan that were "destroyed" by Saddam's regime in Iraq from 1980 to 1988 while "the Security Council didn't even issue a declaration, let alone a resolution."

UN Secretary-General spokesperson Martin Nesirky on Wednesday declared that the UN is concerned about civilians in Syria, after a question from a reporter about the killing of Kurdish civilians.

“You will also recall that Navi Pillay, the High Commissioner for Human Rights, has called for those who carry out such attacks — from whichever side — to be brought to justice.”

Initially, the US spokeswoman Jen Psaki didn’t have a comment yet, apart from saying that the United States “designated them [Jabhat al-Nusra] as a terrorist organization”

Amir Sharifi, president of the Kurdish American Education Society, criticized the Western silence, in a column for the Kurdish newspaper Rudaw.

“In light of these savage attacks, one cannot but wonder why the US, European Union, and the UN are reticent about this bitter and frightening reality. Are not Kurdish human rights being violated by the most notorious forces in history?” he wrote.

“Here Lavrov is adopting the propaganda of the Democratic Union Party (PYD), the Syrian-Kurdish branch of the PKK. For weeks the PYD has claimed that Islamist units of the Free Syrian Army (FSA) have been targeting attacks on Kurdish civilians. Our local informants do not confirm such attacks.”

He suggested, “The Islamist groups that fight with the FSA against the regime and in some cases against PYD units are brutal butchers, but they are not specifically targeting the Kurdish population. To the contrary, it is not currently in their interest to establish a second front that will weaken them in their fight against the regime.”

Nevertheless, the United States seem to have received some confirmation Kurdish civilians were targeted by al-Qaeda-affiliated groups and worries that a sectarian conflict between Kurds and Arabs could  benefit the Assad-regime.

Dina Badawy, deputy spokeswoman for US Foreign Affairs, in a statement to the Kurdish version of Voice of America (VOA) condemned the attack on Saturday.

“We note reports of continued attacks by extremists on Kurdish civilians in the towns of Tal Aaran and Tal Hasel. This overtly sectarian provocation cannot be justified, and we condemn these attacks on civilians.”

“From the beginning of this crisis, the United States has urged the Syrian people, and the Syrian  opposition, to avoid ethnic and sectarian strife because sectarian reprisals play directly into the regime’s hands and do not move the Syrian people closer to the inclusive, post-Assad future they deserve,” said Badawy.

A Kurdish civilian from Tel Aran, who asked to remain anonymous, welcomed the statement. “It might be helpful for the Kurds. They will try their best to make use of the massacres taking place to try to show the world what the extremists are doing there.”

Although he hoped the increasing attention would not lead to more problems, since the Kurds living in isolated towns in the south of Aleppo are “surrounded by Arabs.”

Wladimir van Wilgenburg is a political analyst specializing in issues surrounding on Kurdish politics. He has written extensively for Jamestown Foundation publications and other journals such as the Near East Quarterly and the World Affairs Journal. He currently writes for the Kurdish newspaper Rudaw. On Twitter @vvanwilgenburg