Iran questions whether the Geneva II conference will be successful without Iranian participation. 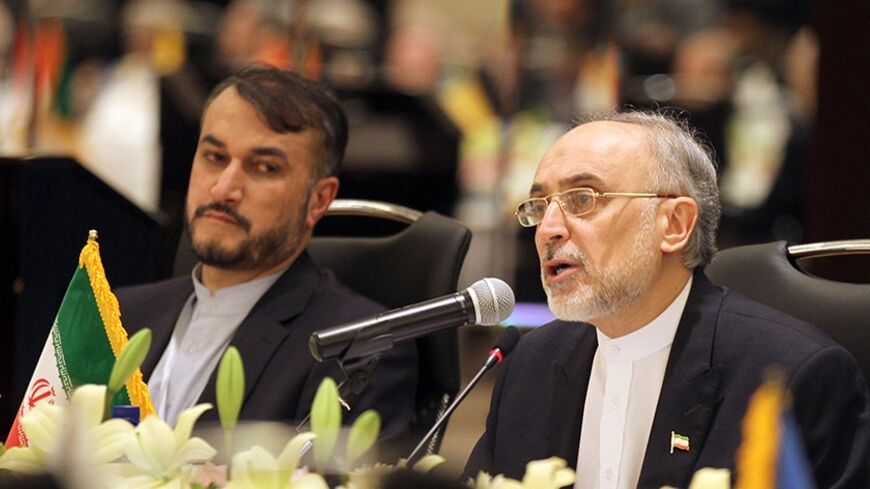 Iranian Deputy Foreign Minister for Arab and African Affairs Hussein Amir Abdullahyan, who was to represent Iran in the Geneva II conference (L), listens to then-Foreign Minister Ali Akbar Salehi speak ahead of the International Conference on Syria "Political Solution-Regional Stability" meeting in the Azadi Hotel in Tehran, May 29, 2013. - AFP/Getty Images/ Atta Kenare

Finally, Geneva II is about to commence, with around 30 countries taking part in the one-day conference in Montreux, Switzerland. Iran was to be among the main guests after UN Secretary-General Ban Ki-moon extended a relatively surprising invitation to take part in the long-awaited peace conference. But in less than 24 hours the allurement was retracted; the secretary-general said the retraction was due to Iran’s stances that weren’t at all consistent with the global consensus behind the Geneva I communique, making Iran the most prominent absentee.

So, what does Iran think about the UN decision?

“We announced from the very beginning that we would accept no preconditions for Iranˈs participation in the Geneva II conference,” said Iran’s Foreign Minister Mohammad Javad Zarif. “In several phone conversations with the UN secretary-general last week, we had told him Iran would accept no preconditions and rejected a proposal from the UN chief that Iran must acknowledge the communique of the Geneva I conference on Syria.” Zarif bitterly criticized Ban, accusing him of making his decision “under pressure from the United States and certain groups, a number of whom have shed the blood of the Syrian people.”

Earlier, I spoke with Hussein Amir Abdullahyan, Iran’s deputy foreign minister, who told Al-Monitor that the United States is insisting in an illogical way on imposing preconditions for participation in Geneva II: “These preconditions contradict with the democratic norms. Only the Syrian people have the right to impose such decisions.” Abdullahyan, who was to represent Iran in the peace conference, made it clear that Iran wasn’t part of Geneva I and is not insisting on being part of Geneva II: “If it weren’t for the preconditions our delegation should have been in Montreux in Switzerland.”

Tehran believes that Geneva II needs Iran and not vice versa, a source in Tehran told Al-Monitor. “Iran can push toward positive endings and is capable of pressing for better results. Those who pressured the secretary-general to retract Iran’s invitation are the ones who don’t want Geneva II to fruit.”

According to the source, “Iran’s reaction wasn’t because of the conference, rather because the whole process of the invitation and the retraction was disrespectful; in Iran we care a lot for how things are done, the same as we care for the reason why they were done.” The source explained that there’s a common understanding among the Iranian ruling elite that it is not mainly Washington behind the decision: “Saudi Arabia doesn’t even want to hear about Iran. It’s reacting nervously on many levels, and the last was their pressure on the Syrian National Council to withdraw if Iran is taking part, the organizers had two choices, either Iran or the SNC so they chose the latter.”

Iran’s absence was expected before the invitation; there was a lot of buzz about the issue, despite the fact that the main parties under whose auspices the conference was organized spoke publicly about Iran’s important role. This was a reason that prompted the Iranians, Syrians and Russians to agree on a road map separate from Geneva II: “When Foreign Minister Zarif and Syrian Foreign Minister Walid Moallem visited Moscow last week, they met with the Russian officials and they agreed on a contingency plan that was drawn based on the situation on the ground,” said our source. He added, “The [Assad] regime and his allies have been on the offense for months now, and today, because of the internal fighting within the opposition camp, the Syrian army took areas that only [a] few months ago they wouldn’t even [think] of going close to, and in some areas the militants are laying [down] their arms — Barzeh, Qaboon and Moadamiyeh are good examples; therefore, it really doesn’t matter to the Iranians if they’re here or there. If you read it well, it’s better for Iran to be out.”

Some in Tehran believe Geneva II is more in favor of the opposition than the regime, but still they are ready to go and help arrive at a certain compromise that hopefully rids Syria of the bloody fate it’s immersed in.

Mohammad Marandi is head of the World Studies faculty at the University of Tehran. He thinks that Geneva II does not reflect the Syria that exists: “It’s not the proper format to solve the crisis in Syria, as those at the table, mainly the opposition, don’t really represent [anyone] but themselves. None of the armed groups is at the table, not even the internal opposition; that’s one of the conference’s weaknesses, but after inviting Iran and retracting the invitation, I think the whole conference is discredited.”