Splits in Syrian opposition coalition ahead of vote

The Syrian National Coalition is likely to vote ‘yes’ to attend Geneva II, but it could prompt a splinter within the group. 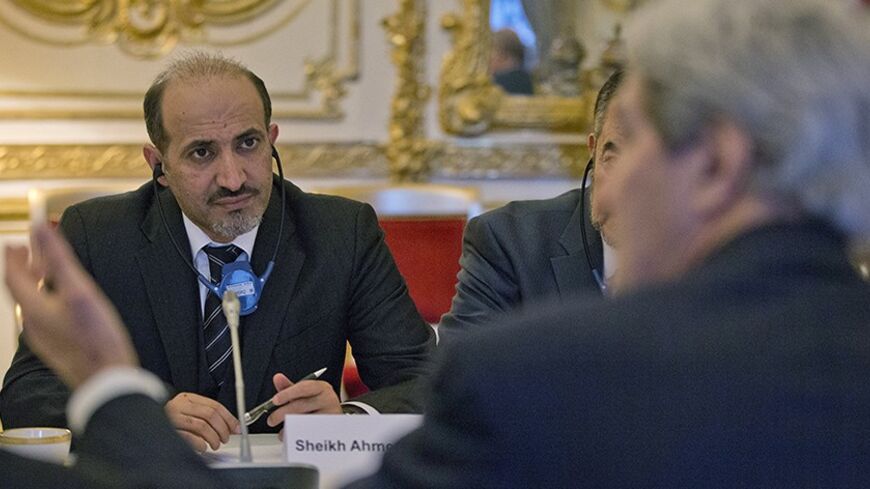 Syrian National Coalition Chief Ahmad al-Jarba (L) listens to US Secretary of State John Kerry during the start of their meeting at the US ambassador's residence in Paris, Jan. 13, 2014. - REUTERS/Pablo Martinez Monsivais

ISTANBUL — A day of fierce debates is in store for the Syrian National Coalition on Friday (Jan. 17), with members still divided over whether or not to attend the Geneva II talks that start Jan. 22.

US Secretary of State John Kerry again urged a “positive vote” from the coalition, reiterating that “the Geneva peace conference is not the end but rather the beginning, the launch of a process, a process that is the best opportunity for the opposition to achieve the goals of the Syrian people and the revolution.”

Numbers are stacking toward a positive vote, with one coalition source estimating to Al-Monitor that 65 members out of 121 are leaning toward a ‘yes’ vote. But the coalition faces complications if it chooses to attend the talks in Switzerland, with the Syrian National Council threatening to withdraw should a ‘yes’ vote pass. The talks will begin in Montreux, and then move to Geneva.

“Ultimately, if the coalition decides to go to Geneva, the council as a bloc will withdraw. The way it works is the head of the council, Mr. George Sabra, will issue a statement saying that the council with its 24 members withdraws from the Syrian coalition, and that no member will remain. That statement has actually been drafted,” the source said.

Hadi al-Bahra, secretary of the coalition’s political committee and adviser to President Ahmad al-Jarba, recognized the potential split that could occur within the coalition if it proceeds to Geneva II.

“The coalition is not owned by the National Council or any member, it’s an institution which was recognized by the international community as the representative of the Syrian people. If one part of it or a member withdrew, we’ll bring somebody else,” Bahra told Al-Monitor.

Bahra is one of the senior officials supporting the coalition’s presence in Geneva II. “We have to go to Geneva to fight the political front as you are fighting the military front, and you give it your best, and try to keep it on track because without a political horizon there’s no solution to the crisis itself,” he said.

Many within the coalition camp, however, are unconvinced Geneva II will produce significant results, and fear the process will drag to no end.

“We already think Geneva has no chance of success. It’s going to be a waste of time and everybody knows this,” the source said.

Bahra says the coalition will not go to Montreux empty-handed, and has a “detailed plan and vision for the future of Syria” to propose at the negotiating table. The coalition has also drafted a “white list” of regime names it will cooperate with in a transitional government, Bahra added.

Saudi Arabia and Qatar privately have little hope for Geneva II, but they may not be standing in the coalition’s way to attend, or Kerry’s attempts to push it forward, the coalition source said.

US Deputy Secretary of State William Burns told Al-Monitor’s Laura Rozen that Kerry had “lengthy conversations” with Saudi Foreign Minister Prince Saud al-Faisal this week and “emphasized again our concerns about the rise of violent extremist groups, the danger of spillover, the importance of success in Geneva II.”

Turkey, however, has been the most vocal about the coalition participating in Geneva II.

“The Turkish government is pushing us very hard to go to Geneva,” one source said, adding that domestic political concerns are prompting Ankara to try to seek a resolution.

This comes a day after Turkish President Abdullah Gul offered a rare public rebuke of the government’s policy on Syria, urging Ankara to “recalibrate” its approach.

Al-Monitor’s Semih Idiz wrote that Turkey has been “gradually shifting its Syria policy due to developments it has no control over,” noting Foreign Minister Ahmet Davutoglu’s support for Geneva II.

One contentious issue within the coalition is whether the group should directly engage with Iran, seen as the main supporter of President Bashar al-Assad and perhaps the only ally that can force Assad to reach a compromise. Iran so far will not be attending Geneva II, but former Syrian Foreign Ministry spokesman Jihad Makdissi told Al-Monitor on Jan. 14 that he believes progress can still be made.

The coalition source supported engagement with Iran to try to rein in the Assad regime. “The only reason why the Assad regime continues to survive is because of Russian and Iranian support. So negotiate with the Russians and the Iranians. We’re not and I think that’s a huge mistake,” the source said.

Bahra disagreed, however, and remained adamant that the coalition would not speak directly with Tehran until the Islamic Republic accepts the Geneva I communique.

“We will not talk to Iran unless they agree on the Geneva I communique. Talk to Iran about what if they don’t agree on your framework of negotiations?” Bahra said. The coalition is taking note of Iran’s heavy involvement in Syria, and hopes that it will exhaust Iran and its economy and prompt it to seek a compromise on Assad.

“Iran is specifically getting exhausted financially. That’s what we’re betting on, over the long run, Iran is going to get exhausted,” the source said.