Obama’s Syria Policy Has Potential For Breakthrough on War

Al-Monitor’s analysis and coverage of US policy toward Syria. 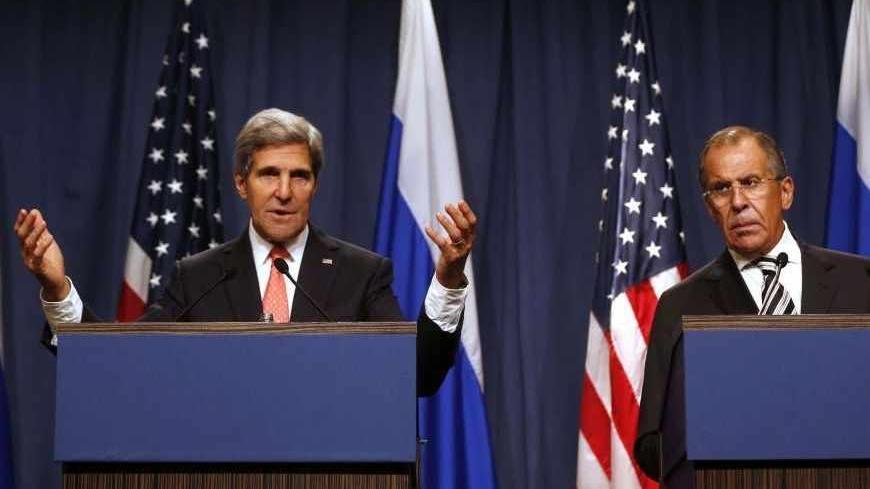 US Secretary of State John Kerry speaks next to Russian Foreign Minister Sergey Lavrov as they answer questions from the media, following meetings regarding Syria, at a news conference in Geneva, Sept. 14, 2013. - REUTERS/Larry Downing

The US-Russia framework to eliminate Syria’s chemical weapons, agreed to in Geneva on Sept. 14, marks a potential strategic and humanitarian breakthrough to end the 2½-year Syrian war.

The devil is in the details, and compliance by Damascus must be rigorously verified, but big things don’t come easily or without risk.

The bottom line, for now, is that the framework — which will soon be backed by a UN Security Council resolution, even if imperfect — has the potential to do far more than a “targeted strike” ever could do to eliminate Syria’s chemical weapons.

The US-Russia negotiations on the framework have also been a catalyst for a diplomatic surge toward convening the Geneva II conference on a political transition in Syria. United Nations-Arab League joint special representative Lakhdar Brahimi met with US Secretary of State John Kerry and Russian Foreign Minister Sergey Lavrov in Geneva on Sept. 13, on the sidelines of the framework discussions, and the three reaffirmed their commitment to Geneva II.

In remarks the next day, Kerry said that the chemical weapons agreement “could also lay the groundwork for further cooperation that is essential to end the bloodshed that has consumed Syria for more than two years. What we agreed on here today could conceivably be the first critical, concrete step in that direction. The United States and Russia have long agreed that there is no military solution to the conflict in Syria. It has to be political. It has to happen at the negotiating table. And we, together, remain deeply committed to getting there. From the beginning, President Obama has repeated again and again there is no military solution. We must find a political solution through diplomacy.”

Kerry, Lavrov and Brahimi are scheduled to meet in New York during the UN General Assembly meetings on Sept. 27 for further discussions on the conference. According to a UN media statement on Sept. 13, “The goal of a second Geneva conference would to be to achieve a political solution to the conflict through a comprehensive agreement between the Syrian Government and the opposition for the full implementation of the Geneva communiqué, adopted after the first international meeting on the issue on 30 June 2012.”

The Syrian government has agreed to participate in Geneva II, “without preconditions,” according to the Russian Ministry of Foreign Affairs, following the meeting Sept. 9 in Moscow between Lavrov and Walid al-Muallem, Syrian president of the Council of Ministers and minister of foreign affairs and expatriates.

The mainstream Syrian opposition, however, has so far resisted signing up for Geneva II, insisting on “the importance of excluding Assad, and those around him who are also guilty of crimes against the Syrian people, from Geneva II.”

The US-Russia framework agreement caught the opposition unawares and scrambling for a response. Gen. Salim Idris, chief of staff of the Supreme Military Command of the Free Syrian Army, said, “All of this initiative does not interest us. Russia is a partner with the regime in killing the Syrian people. … A crime against humanity has been committed, and there is not any mention of accountability.”

The agreement, once it moves to implementation, with the backing of the US, Russia, and the Security Council, could put pressure on the opposition and their regional patrons — especially Saudi Arabia, Turkey and Qatar — to reduce hostilities in support of the process, even though most of the chemical weapons sites are believed to be under regime control.

Kerry, in remarks with Lavrov after the announcement of the agreement, said that “since these weapons are in areas under regime control predominantly, Sergey raises questions that maybe the opposition has some here or there, and absolutely, fair is fair. Both sides have to be responsible. If they do … that may present a larger challenge. But those of us who have been supporting the opposition have a responsibility to help create access there, and the regime has responsibility where we believe the … weapons … ought to be accessible because the Assad regime controls the access.”

Turkey could be asked to close its border in order to end the flow of fighters, arms and logistics into Syria. Tulin Daloglu reported for Al-Monitor on the arms transfers from Turkey to Syrian rebel forces.

Some of the radical opposition, in particular, may resist both cooperation with inspectors and steps toward the Geneva conference and seek to scuttle the agreements and continue the fight.

The US position that Assad must “step aside,” as Obama first said more than two years ago, on Aug. 18, 2011, should not obstruct Geneva II. The nature of the transition can and should be worked out in the conference, not before, among the Syrian parties. There is no stipulation in the Geneva Communique of any such precondition to exclude the Assad regime from the negotiations.

US support, including arms to moderate rebel forces, should be linked to the opposition parties agreeing to both the disarmament and Geneva processes. It should not be interpreted as an open-ended US commitment to intervention on their side in the Syrian war. President Obama ruled out an open-ended commitment in his address to the nation on Sept. 10.

A cease-fire could not come soon enough.  Last week the UN Human Rights Council released the sixth report of the independent international commission of inquiry on the Syrian Arab Republic which says that Syria “is a battlefield. Its cities and towns suffer relentless shelling and sieges. Massacres are perpetrated with impunity. … There is no military solution to this conflict. Those who supply arms create but an illusion of victory. A political solution founded upon tenets of the Geneva communiqué is the only path to peace.”

The report also notes, in contrast to the work of a now-discredited analyst cited during a Senate Foreign Relations Committee hearing on Sept. 3 about an alleged rise in “moderation” among Syria’s opposition forces, “Despite efforts to limit the extremists’ influence in opposition circles, the radicalization of anti-government fighters continued. Alongside a growing number of foreign fighters, the discipline and operational abilities of radical fighters, combined with better access to reliable sponsors, allowed them to outmatch the fractious moderate groups. The most radical, such as Jabhat Al-Nusra and the Islamic State of Iraq and Al-Sham (ISIS), developed their own strongholds in the north. ISIS subsumed the Islamic State of Iraq, a group which, with Al-Nusra, is on the sanctions list maintained by the Security Council Committee pursuant to resolution 1267.”

President Obama said that the Syria “plan emerged only with a credible threat of US. military action.” No question that the threat of force is most effective when coupled with international diplomacy, as is now the case. International support also cushions the administration given overwhelming American opposition to involvement in Syria. Polls taken after Obama’s Sept. 10 address reveal that only 28% support military action and just 39% say it is in the US interest to be involved in the Syrian conflict.

On Sept. 9, Obama seemed to give a nod to Iran when he said in an interview with Fox News, “Even Assad's allies recognize that … he crossed the line in using chemical weapons. Iran itself was subjected to chemical weapons use by Saddam Hussein. Their populations remember what terrible weapons these are.”

Iranian Foreign Minister Javad Zarif is expected to meet with EU Foreign Policy Chief Catherine Ashton in New York on Sept. 23, as reported by Laura Rozen, in order to get the P5+1 talks back on track. Barbara Slavin wrote last week that former State Department official Robert Einhorn, who was a member of the US team at the P5+1 negotiations, advocates direct talks between the US and Iran to break the deadlock in the P5+1 talks.

Iranian President Hassan Rouhani may have an openness to diplomacy with the United States on a range of issues. This does not mean Rouhani sees his mandate as caving to US demands for Iran to give up what it considers its rightful interests in Syria or for Iran to have a civilian nuclear program. If the US approaches Iran, as it has done with Russia, in a spirit of partnership to end a war and eliminate the threat of weapons of mass destruction, diplomatic discussions on both Syria and Iran’s nuclear programs could accelerate even faster.