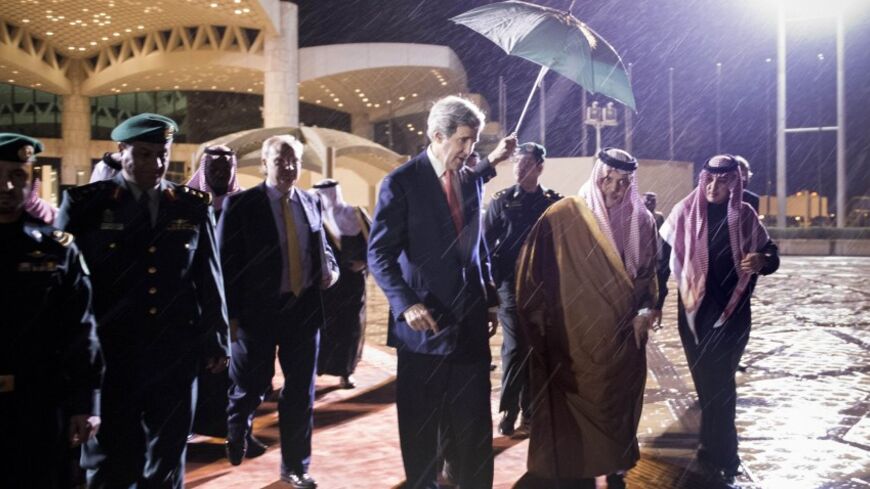 Saudi Arabia begins 2014 with plans for an assertive regional policy that include continuing the war in Syria until President Bashar al-Assad is deposed.

Nawaf Obaid, a fellow at the Belfer Center for Science and International Affairs at Harvard University’s John F. Kennedy School of Government and a senior fellow at the King Faisal Center for Research and Islamic Studies, and someone with deep knowledge of Saudi decision-making, writes this week: “Of utmost importance for stability in the Arab world is the creation of a military force that can successfully deter Iranian activities and assist the Syrian rebels in bringing down the Assad regime in Damascus. A military command based at its new headquarters in Riyadh will be established in 2014. The Gulf command will be built into a 100,000 standing military force with the Saudis contributing anywhere between 50,000 to 75,000 troops. The ultimate objective is to guarantee that this new global powerhouse bloc will effectively dominate and significantly alter the political, economic and security landscape of the MENA [Middle East and North Africa] region.”

The plan for a 100,000-strong Gulf command force, based in Riyadh, raises several questions about Saudi capabilities and intentions.

First, will other Gulf countries contribute to a regional army designed to challenge Iran and assist Syrian rebels and foreign fighters to overthrow Assad?  As this column reported last month, the trend in the Gulf may be in following the US lead and testing Iran’s diplomatic openness, and combating terrorism, rather than initiatives that contribute to even further tensions.

Second, is Saudi Arabia really considering bringing 25,000-50,000 foreign fighters for training in the kingdom to deter Iran and fight in Syria? Where would these fighters come from, and what would be the consequences of such an initiative, domestically and regionally, for Saudi Arabia? How might Iran respond?

Third, how effectively can Saudi Arabia project military power beyond its borders, besides Bahrain, and given its mixed military record in dealing with Yemen? The Turkish port of entry for Syrian fighters may narrow and soon close, a trend Al-Monitor has been covering. As Semih Idiz reports this week, a new report that the Turkish government is arming jihadists for Syria will likely result in further pressure on Turkey to crackdown on the border traffic of fighters and arms to Syria, especially as Ankara seeks to both keep the United States close and improve ties with Iran, while Turkish Prime Minister Recep Tayyip Erdogan faces the worst domestic scandal of his premiership.

Geneva II got a potential boost on Jan. 5 when US Secretary of State John Kerry hinted that Iran might assist from the "sidelines," if not as a full participant in Geneva II. Al-Monitor broke the news of Iran’s welcoming the Geneva II initiative in an interview with Mohammad Khazaee, Iran’s permanent representative to the United Nations, in May. In an interview with Al-Monitor in September, Iranian Foreign Minister Mohammad Javad Zarif said that Iran is ready to help on Syria and would participate in Geneva II, but only if asked, and without conditions.

In addition to a possible role for Iran, the other good news for US Syria policy is that US-Russia cooperation has allowed a re-energized Geneva diplomatic process that produced the US-Russia Framework for Elimination of Syrian Chemical Weapons, leading to UN Security Council Resolution 2118 and thereby avoiding the uncertain consequences of a US military strike. There are of course those who complain that the absence of a US strike on Syria was somehow a sign of US weakness, although the elimination of Syria’s chemical weapons is on course, and, according to a CBS/New York Times poll at the time, 68% of Americans did not believe the United States had an obligation to “do something” in Syria and 82% supported the US-Russia agreement.

The Obama administration is crystal clear on the links between Syria and the expansion of terrorism in the region, especially following the escalation in violence in Iraq and Lebanon last week. In response to a question on Iraq, Kerry said on Sunday, “This is a fight that is bigger than just Iraq. This is part of the reason why the Geneva conference is so critical, because the rise of these terrorists in the region and particularly in Syria and through the fighting in Syria is part of what is unleashing this instability in the rest of the region. That’s why everybody has a stake. All of the Gulf states, all of the regional actors, Russia, the United States and a lot of players elsewhere in the world have a stake in pushing back against violent extremist terrorists who respect no law, who have no goal other than to take over power and disrupt lives by force.”

The priority for Geneva II, especially given the terrorism in Iraq and Lebanon, let alone the devastating humanitarian tragedy in Syria, should be a cease-fire and discussions of a transition to internationally supervised elections in Syria, as advocated by former US President Jimmy Carter, among others, including this column.

The United States does not have an interest in supporting a continuation of the war until Assad is overthrown. There is no strategic rationale or moral high ground in fighting Assad until the end, or in not dealing with Assad, when the real-life consequences of a military solution are more war, more death, more refugees and more terrorism for Syria and the region. As former US diplomat Ryan Crocker wrote in The New York Times last month, “We need to come to terms with a future that includes Assad — and consider that as bad as he is, there is something worse.”

The verdict on war crimes by the Assad regime and other warring parties can and should be dealt with by the Syrians themselves, assisted by the UN and the international community, following a cease-fire and transition.

Proponents of a military solution may rally to reports that Islamic Front forces have joined with the Free Syrian Army to battle Islamic State of Iraq and al-Sham (ISIS) in northern Syria, as if this will give a second wind to the secular opposition, which are, regrettably, in decline and disarray. To the contrary, if true this trend, over time, would instead be more likely to contribute to the partition of Syria, to the continuation of the war, to the empowerment of Islamists with no democratic inclinations, and to the strategic benefit of Assad, who can sit back and let his adversaries fight in areas he may be willing to concede, at least for now, while the war rages for years, as he does not appear to be going anywhere.

The United States needs Saudi Arabia on board for the success of any political process in Syria, and for reducing tensions with Iran. The Obama administration should continue to reassure Riyadh it is not being left behind and prefers it to be a full partner for potentially historic changes in 2014. But Washington should also make clear that its strategic and moral interests are in ending a war, not continuing it, and that the United States will not be party in Syria to another costly regime change fantasy fueled by a centuries-old Sunni-Shiite conflict in which the United States has no stake.