Edward Dark writes from Aleppo that arming the Syrian opposition will prolong the war; Iran and Russia dig in on President Bashar al-Assad. 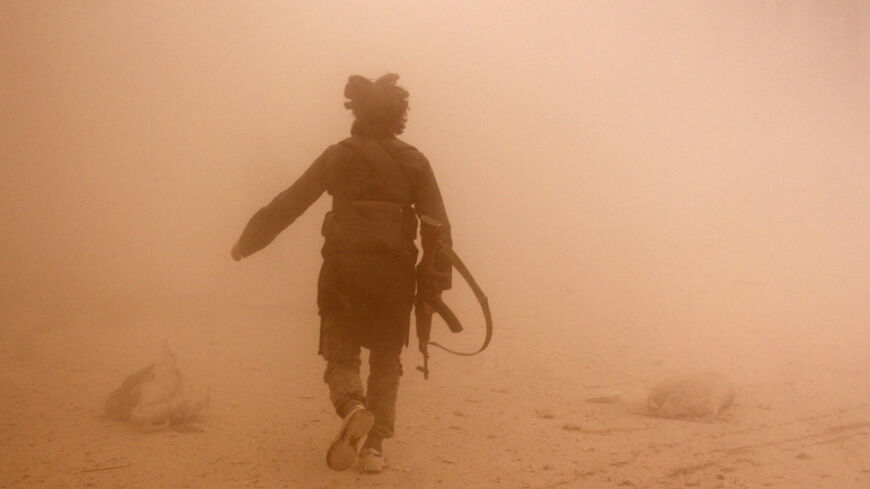 A rebel fighter runs through dust toward an area damaged by what activists said were barrel bombs dropped by warplanes loyal to Syria's President Bashar al-Assad, in Aleppo's al-Shaar neighborhood, Nov. 6, 2014. - REUTERS/Rami Zayat

UN Special Envoy for Syria Staffan de Mistura arrived in Damascus Nov. 8 to discuss a new initiative for “freezing” the war in Syria, beginning with a cease-fire and urgent humanitarian relief for Aleppo.

Speaking to UN Radio Nov. 3, de Mistura said, “If we can freeze that and show that at least Aleppo can become an area where we can provide some better life for citizens, then the focus can be, as it should be, on [the Islamic State].”

Edward Dark’s report from Aleppo conveys the desperation of residents for an end to the war:

“This once-vibrant metropolis has been reduced to little more than a sad, distorted shadow of its former beauty and glory. Cold, rubble-strewn streets crisscross the deserted and largely devastated neighborhoods of its rebel-held east, while daylight hours in its regime-held west bring the hectic bustle of a battered and weary population desperately trying to go about daily life and survive. The night brings darkness and solitude to both, but no comfort or respite, as their hapless inhabitants hunker down, shivering from the cold and in fear of the constant sound of gunfire, shelling and explosions. Life in this city is terrible and has been for more than two years now, ever since the civil war that tore apart the Syrian nation dropped anchor and rudely barged into my hometown. Since then, my city has been a place of constant war and destruction, which its inhabitants struggle to survive amid abject misery and suffering. Its collapsed economy and infrastructure mean that even the most essential necessities are scarce or beyond the reach of most people. The specter of death constantly hovers above their heads forebodingly, ready to whisk them or their loved ones away at a moment’s notice. Aleppo is a microcosm of Syria. The suffering here is just as real and horrible as it is everywhere else. It does not distinguish friend from foe or regime loyalist from opposition supporter. It affects us all.”

This column wrote in May that a local cease-fire negotiated that month to end the siege of Homs, maligned by some as a "victory" for Syrian President Bashar al-Assad, was better understood as “a victory for the people of Homs, who finally got some relief from a brutal siege, and a possible model of the incremental, painstaking and localized diplomacy required to bring relief to Syrians in war zones, especially given the collapse of the Geneva process.”

De Mistura’s initiative may have a pulse. On Nov. 5, the UN envoy met with US national security adviser Susan Rice in Washington, before traveling to Syria three days later.

On Nov. 8, Russian Foreign Minister Sergey Lavrov said, after meeting with US Secretary of State John Kerry in Beijing, “We have also discussed the need for renewing the political process of talks between Syrian government and opposition. The [US] Secretary of State has agreed with our old thesis that the Syrian opposition should be represented by various groups, and not only by the national coalitions comprised of people who left Syria [a] long time ago and haven't visited it for a long time, there also are forces of inner opposition, I mean the political forces. … We have also discussed the steps that Russia, [the] US and the region's states could undertake to support the efforts on creating such a national dialogue between all the Syrians, just the way it was stipulated by the notorious Geneva Communique of June 30, 2012."

The United States should rally behind this new UN initiative. The US-led air campaign against the Islamic State (IS) in Syria needs a ground game and a political process. The US-backed moderate Syrian opposition alone cannot provide the political or military fire power for either. The Syrian government, on the other hand, could tip the balance against IS and is essential to any peace process, as is the engagement of internal Syrian opposition forces. While the Barack Obama administration cannot and should not deal with Assad, the UN faces no such restriction.

Despite discontent within even regime strongholds in Syria, which Al-Monitor has reported, Russia and Iran consider their backing of Assad vindicated by the rise of IS and terrorist groups in Syria.

Vitaly Naumkin writes this week that Moscow anticipates no major changes in its Syria policies, especially given the threat from IS:

“In Russian official circles, Damascus is considered the force most capable of stopping the jihadists from the Islamic State (IS) and other terrorist organizations, and cooperation with the Syrian government is vital to the struggle against IS. … Russian experts believe that despite grave casualties suffered by Syrian government forces, they are still battle ready and of high integrity. Here, they do not value rumors that follow some resignations and reshuffling in the Syrian leadership such as the dismissal of Assad's maternal cousin, Col. Hafez Makhlouf, brother of the leading Syrian businessman Rami Makhlouf.”

Iran Deputy Foreign Minister for Arab-African Affairs Hossein-Amir Abdollahian said Nov. 6, “If there weren't the strong resistance of the Syrian government under leadership of President Bashar al-Assad and the support of the Syrian people to the campaign against takfiri terrorists, the world would have witnessed dominance of terrorists on Damascus.”

This is not to say that there is no chance of an exit ramp for Assad in the context of a political transition in Syria. But if such a change is to occur in a way that doesn’t take Syria down roads marked “Libya” or “Iraq,” it will instead happen as the result of negotiations involving Moscow and Tehran. The Iran “four-point plan” for Syria, for example, includes some decentralization of presidential power. The UN, with subtle US backing, should keep this proposal warm.

Dark writes from Aleppo that those who speak of "liberating" Syria, consciously or unconsciously, have neither a care nor a clue about the plight of Syrians:

"Those who justify the continuation of our death and suffering either do so on the premise of liberating our lives from tyranny or on the premise of protecting it from extremism. Both are lies, of course, but they do have one truth in common as we jokingly note here: They all want to 'liberate' our lives from this earthly world. This cause will certainly not be helped at all by arming the 'moderate' rebels with no clear strategy for the day after or how to plausibly bring this conflict to an end. All this will do is just prolong the war and our suffering indefinitely. It is a rehashing of previous failed strategies that not only have not achieved their objectives, but spectacularly backfired.

"The Western and Gulf-backed umbrella opposition group in Istanbul is a disorderly mess that has no credibility or any actual influence inside Syria as the rebels who were meant to provide that power on the ground are now a spent force. They stalled in their push to topple the regime when they had the best chance in mid-2012. Worse of all, they failed miserably at providing even a semblance of stability or civil rule to the areas under their control, degenerating instead into infighting between organized crime syndicates that parasitically fed off their own people and created power vacuums just waiting to be filled by shrewd and opportunistic extremists. This, coupled with the desperation of seeing their lives and homes devastated by the regime’s air force, missiles and barrel bombs drove many Syrians into radicalization at the hands of those extremists who offered a better deal both spiritually as well as on the battlefield. Since then, the rebels have been superseded by the more effective and more disciplined militant jihadists, and driven back by the forces of a resurgent regime heavily backed by its powerful allies on the battlefield as well as outside it. Arming the rebels is de facto arming the extremists, period.”