Arming Syria’s rebels is a dangerous move that will only result in prolonging the war and potentially empowering extremists. 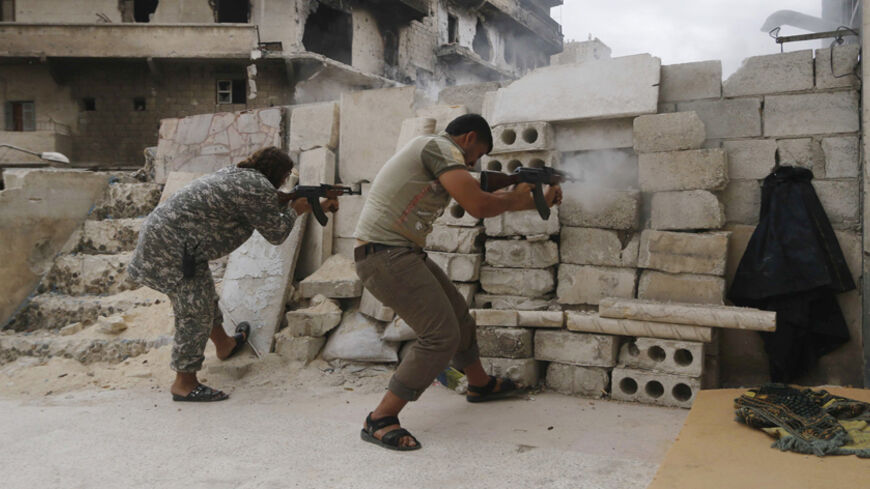 The Syrian conflict is taking yet another dramatic turn as the militant jihadists of Jabhat al-Nusra, al-Qaeda’s official Syrian affiliate, rout rebels from their strongholds in Idlib, threatening to eliminate entirely any presence by moderate rebels in northern Syria, as the Islamic State has already done in the east.

The focus is now turning to Aleppo, where rebels are making their last stand against both the encroaching forces of the regime and the jihadists. Will they be left to face their fate alone as in Idlib, or will someone come to their rescue? If yes, who and how? If the French and Turks have their way, they might yet be saved, but at present it appears that the United States has finally given up on its former rebel allies, writing them off completely.

So in Aleppo, people are buzzing with questions and seeking answers. This once-vibrant metropolis has been reduced to little more than a sad, distorted shadow of its former beauty and glory. Cold, rubble-strewn streets crisscross the deserted and largely devastated neighborhoods of its rebel-held east, while daylight hours in its regime-held west bring the hectic bustle of a battered and weary population desperately trying to go about daily life and survive. The night brings darkness and solitude to both, but no comfort or respite, as their hapless inhabitants hunker down, shivering from the cold and in fear of the constant sound of gunfire, shelling and explosions.

Life in this city is terrible and has been for more than two years now, ever since the civil war that tore apart the Syrian nation dropped anchor and rudely barged into my hometown. Since then, my city has been a place of constant war and destruction, which its inhabitants struggle to survive amid abject misery and suffering. Its collapsed economy and infrastructure mean that even the most essential necessities are scarce or beyond the reach of most people. The specter of death constantly hovers above their heads forebodingly, ready to whisk them or their loved ones away at a moment’s notice. Aleppo is a microcosm of Syria. The suffering here is just as real and horrible as it is everywhere else. It does not distinguish friend from foe or regime loyalist from opposition supporter. It affects us all.

Ironically, this shared suffering might be the only thing that unites Syrians now, but I believe they are also united by an urgent desire to stop the suffering and end the war and killing that is causing it. We are no longer interested in who was to blame or even who gets to crown his glorious victory on a throne made from the debris of our broken cities and mortared with the blood and broken skulls of our children.

Our desires, however, run contrary to the wishes of the powers that hold all the cards in our country’s civil war. Our voices fall on deaf ears in what is the ultimate paradox of attempting to bring about peace by promoting more violence and war, or so it would appear if the eternal refrain of a “peacefully negotiated political settlement” is to be taken at face value.

This cause will certainly not be helped by arming the “moderate” rebels with no clear strategy for the day after or how to plausibly bring this conflict to an end. All it will do is indefinitely prolong the war and our suffering. It would be a rehashing of previous strategies that not only failed to achieved their objectives, but spectacularly backfired.

The Western- and Gulf-backed umbrella opposition group in Istanbul is a disorderly mess that has no credibility or actual influence in Syria, as the rebels who were meant to provide that power on the ground are now a spent force. They stalled in their push to topple the regime in mid-2012, when they had the best chance. Worst of all, they failed miserably at providing even a semblance of stability or civil rule to the areas under their control, allowing instead a degeneration into infighting between organized crime syndicates that parasitically fed off their own people and created power vacuums waiting to be filled by shrewd and opportunistic extremists. This, coupled with the desperation of seeing their lives and homes devastated by the regime’s air force, missiles and barrel bombs drove many Syrians toward radicalization and into the hands of those extremists who offered a better deal, spiritually as well as on the battlefield. Since then, the rebels have been superseded by the more effective and more disciplined militant jihadists and driven back by the forces of a resurgent regime heavily backed by its powerful allies on the battlefield and off it.

Unless one can fix the serious, inherent flaws of the opposition and rebels, then arming them would not only be counterproductive, but also potentially very dangerous, as many of them have been taking their weapons and defecting to jihadist groups. Arming the rebels is de facto arming the extremists, period.

Resurrecting a strategy that spectacularly failed in the past and expecting it to work this time around shows a striking inability to grasp basic concepts or smacks of desperation and confusion, which is bad news for the millions of Syrians whose lives are directly affected by such decisions. The demise of the moderate Syrian rebels will see the influence of the West and Turkey in Syria’s civil war greatly dwindle, which is why they are loath to see them go. This loss has been a work in progress as the Islamists’ power and influence have grown. They are on two sides of a seesaw, a problem that the Gulf states of Qatar and Saudi do not have, as they have been busy financing and supporting some of these Islamists groups for some time.

The machinations of the many actors and their proxies in my country ensured that its people would never see the freedom they were tantalizingly promised. Instead, they got a cynical war driven by others' malevolent interests. Someone brought Pandora’s box to Syria and opened it. No wonder they are struggling to put the demons back inside; the monsters they have unleashed are now coming for them.

It appears there might finally be a faint glimmer of hope, as a bit of sanity calling for change has resulted in tentative, broad backing for moves toward localized cease-fires and a “freezing” of the conflict, news that will be welcomed by the vast majority of Syrians. Until then, however, we are stuck in limbo, waiting for our nightmare to end. In the meantime, please don’t make our plight even more unbearable. Don’t throw more fuel at the inferno consuming us 10 dozen souls at a time. Don’t arm the rebels.