Geneva II: the view from Aleppo

Syrians have little interest in the diplomatic gamesmanship; they want a return to normalcy. 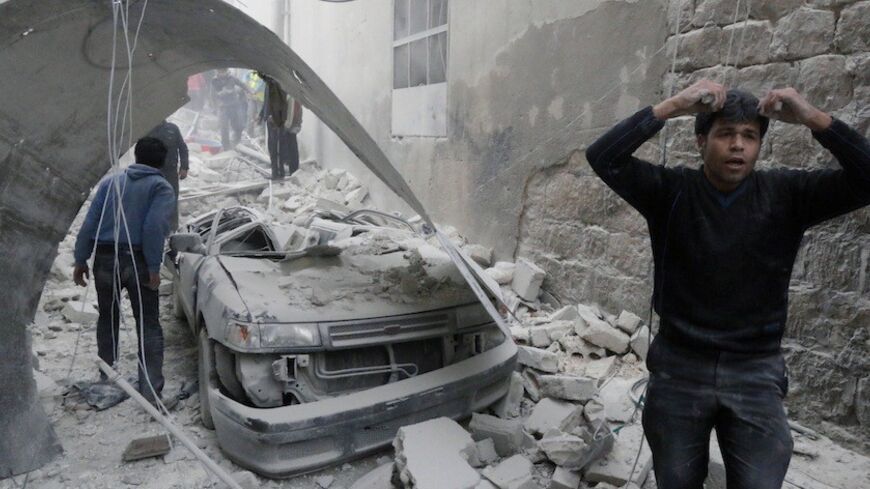 A man who survived shelling reacts amid damage after what activists said was an airstrike by forces loyal to Syrian President Bashar al-Assad in the Al-Maysar neighborhood of Aleppo, Jan. 19, 2014. - REUTERS/Saad Abobrahim
Edward Dark
@@edwardedark
January 19, 2014

ALEPPO, Syria — It's just a few days before the long-anticipated Geneva II talks aimed at finding a peaceful resolution to the Syrian conflict kick off, and already there are dramatic swings and changes on the battlefield and in the diplomatic arena. The regime has submitted its final roster and named the officials who will be representing it, while the ever fractious Western- and Gulf-backed opposition-in-exile is still bickering. But a threat from the US and the UK to cut off support if it fails to attend may provide the needed incentive for the national coalition to finally field its delegation. Crucially, Haytham Mana’s NCB (National Coordination Body for Democratic Change, an umbrella group for what is known as the “internal opposition”) will likely not be attending. Also notably absent is Iran, which raises serious questions about the aim of the talks. Are they merely a theatrical media circus to announce to the world what was already agreed upon between the world’s superpowers? Or are they simply a half-hearted and feeble attempt at peace brokering — a solid waste of time?

The most notable and dramatic event, of course, involves the recent Islamist rebel infighting between the Islamic State of Iraq and al-Sham (ISIS) and the nascent Saudi-backed Islamic Front, which has claimed over 1,000 lives in the past two weeks, shifting areas of control in north Syria after the moderate Free Syrian Army was almost completely destroyed earlier last month. Significantly, the United States and Russia are now seemingly closer to a consensus as they try to push for localized cease-fires in Syria, something which has in fact already successfully taken place in Madamieh and Barzeh in Damascus, providing a possible template for a broader cease-fire, as well as for prisoner exchanges and access to humanitarian aid for besieged areas across Syria.

The other dramatic development comes from neighboring Turkey, wracked by recent internal political turmoil. President Abdullah Gul has unexpectedly announced that Turkey is re-shifting its strategy toward Syria, no doubt in alarm at ISIS gains and their takeover of the entire Raqqa province, including the border crossing into Turkey at Tal Abyad plus many towns across north Syria, most notably Al-Bab and Jarabulus in Aleppo. Of course, some may argue that this has more to do with internal political maneuvering and one-upmanship between Gul and his former ally Prime Minister Recep Tayyip Erdogan in an open clash for power, and that the former is using this shift to outmaneuver Erdogan, whose policy on Syria has largely been a failure and has backfired, and is viewed mostly negatively in Turkey.

But many observers feel this is a pragmatic move, especially as it comes on the heels of the raid and closure of an Islamic charity in the border town of Kilis believed to be aiding al-Qaeda in Syria, the same group involved in the Mavi Marmara ship incident off the Gaza Strip that sparked a major international diplomatic rift at the time. The recent controversy concerning the obstruction of the searching of a truck believed to be carrying weapons to rebels in Syria may also have played a part. It seems Turkey now views the situation in Syria as very dangerous and an imminent threat to its national security. Pity it took an al-Qaeda takeover right on its borders to make Ankara see what many had long warned about but, then again, the Islamist Turkish government has always been accused of basing policymaking on ideology, not on realpolitik. It remains to be seen what impact this will have on the ground in Syria, but if Gul’s words are to be taken at face value, it seems to signal that Turkey has finally been brought around to seeing that a military de-escalation in Syria is in everyone’s interest, as it is now clear that Assad’s regime can no longer be toppled with force and only extremist groups will benefit from any further militarization of the conflict. Assad is here to stay, at least for the foreseeable future, so it’s time to prepare the table for doing business with him; that seems to be what Gul meant by “patience and quiet diplomacy.” The wild card in all this, of course, remains Saudi Arabia, whose stance so far has been contrary to its Western and regional allies, preferring the continued arming of jihadist rebels to any political settlement that may see Assad remain in power. Will they be persuaded to fall in line or not? That remains to be seen as the talks begin in earnest.

Aside from the regional and international brinkmanship and realignments, the average Syrian quite honestly has very low expectations for the Geneva II talks. The countless millions who are now displaced, hungry and besieged — or just shell-shocked and war-weary — just don’t care for the nuances and finer aspects of international diplomacy. Concrete action on the ground is what they most desire — cease-fires and aid first and foremost; the rest is a footnote to them. Who wins what and which side gains or loses are secondary considerations for the masses longing for a semblance of normalcy and sanctuary from the constant bloodshed. Furthermore, the cynics are across the board, from the most ardent of regime supporters to the most committed of rebels. For them, Geneva II is just another talking shop where the self-righteous and powerful get to feel good about themselves while pretending to help ease the Syrian suffering. “We’ll be up to Geneva 17 before we see an end to this war,” one of them remarked.

The talks have been the butt of jokes and caricatures across social media from both loyalist and opposition groups, which gives some indication of what regard they are held in. Yet, while it’s ever so easy to be negative and cynical, prudent observers and sage commentators will point out that these talks are the only way out of the conflict, and the only salvation the people have. Otherwise, the unfortunate Syrians are doomed to be chronically trapped in a vicious cycle of wanton death and destruction, sinking ever deeper into a vengeful quagmire of self-perpetuating hatred and war. The only winners, should the Geneva II talks fail, will be the extremists and warmongering profiteers, and the sure losers will be the Syrian people, whatever their affiliation and politics.