After Syria peace talks in Geneva suspended, diplomats look to world powers to agree on aid access and humanitarian deliverables at a meeting of the International Syria Support Group in Munich on Feb. 11 to try to revive a diplomatic process. 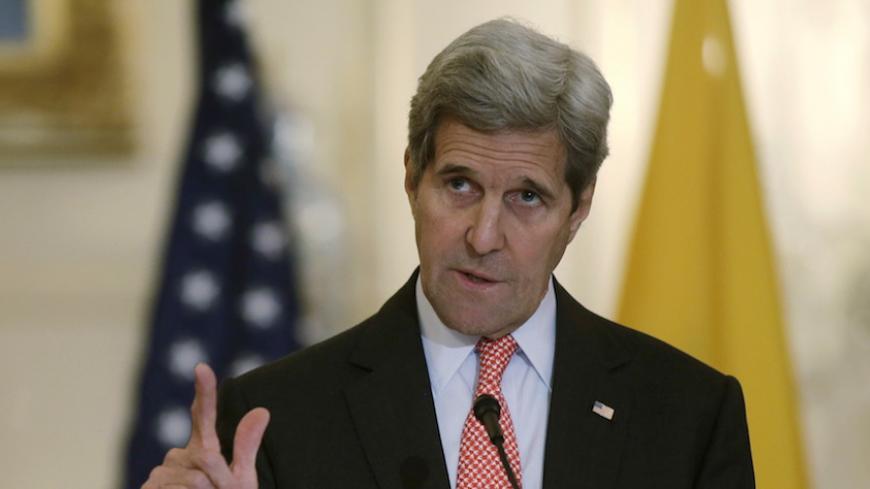 US Secretary of State John Kerry delivers his remarks with Colombian President Juan Manuel Santos (not pictured) at a joint news conference at the State Department in Washington, Feb. 5, 2016. - REUTERS/Gary Cameron

WASHINGTON — The seemingly doomed Syria peace talks, suspended by the UN envoy in Geneva on Feb. 3, may get a boost if world powers can agree on humanitarian aid deliverables at a meeting in Munich next week, diplomats hope.

The United States won’t stand for “talk for the sake of talk in order to continue the bombing” in Syria, US Secretary of State John Kerry said Feb. 5. He added that it would be known “in the course of the next days” whether or not Russia was serious.

Diplomats said they would try to resurrect efforts to negotiate humanitarian aid access to 18 besieged areas and toward a Syria cease-fire at a meeting of the International Syria Support Group (ISSG) foreign ministers in Munich on Feb. 11. This is happening just as Russian-backed Syrian army troops made advances on Aleppo that could soon cut Syrian rebels off from their supply routes to Turkey.

Kerry said Russia was obliged to use its leverage with the Syrian government to get it to provide the humanitarian access called for in a UN Security Council resolution unanimously agreed to on Dec. 18. This is a point Kerry said he pressed in a “robust” phone conversation with his Russian counterpart Sergey Lavrov on Feb. 4, a day after the Geneva talks broke down.

“The UN Resolution 2254 on which these talks are based, paragraph 12, I quote, ‘calls on the parties to immediately allow humanitarian agencies rapid, safe, and unfettered access throughout Syria by the most direct routes; allow immediate humanitarian assistance to reach all people in need,’” Kerry said at a meeting with UK Foreign Minister Philip Hammond on the sidelines of a Syria aid summit in London on Feb. 4.

“Russia voted for that,” Kerry said. “Russia has a responsibility, as do all parties, to live up to it.”

He added, “We discussed, and [Lavrov] agreed that we need to discuss, how to implement the cease-fire and also how to get access by both parties … for humanitarian assistance.”

“The Russian bombardment around Aleppo has plainly undermined the Geneva talks and dealt a significant setback to UN efforts toward much-needed peace in Syria,” US Ambassador to the UN Samantha Power said in a statement Feb. 5. “ At the same time they urge a return to peace talks, Russia and the Bashar al-Assad regime are escalating their indiscriminate bombing of populated areas and civilian infrastructure.”

UN Syria envoy Staffan de Mistura called for the pause in the first proximity talks between the Syrian regime and opposition delegations in two years only hours after the arrival of the head of the Syrian opposition High Negotiating Committee (HNC) in Geneva on Feb. 3 –– just as Russian-backed Syrian army forces made substantial gains in their battle to retake Aleppo, while driving thousands of civilians to flee toward Turkey.

The Syrian opposition HNC has demanded that key humanitarian measures called for in UN Resolution 2254 be fulfilled to continue with the Geneva talks. Specifically, they want agreement to lift the blockades on all Syrian towns (16 out of 19 are besieged by the Syrian government, two by the opposition and a third by the Islamic State, which is not a party to the talks), an end to shelling civilians and the release of prisoners, particularly women and children.

“Despite the positive efforts of countries, the murder of Syrians continues,” Syria opposition HNC leader Riad Hijab told journalists in Geneva after meeting with de Mistura on Feb. 3. “You witnessed attacks … on Aleppo, 215 airstrikes … barrel bombs and gas. The siege on the Syrian people causing death by airstrikes and starvation.”

“He ‎who wants a political solution wouldn't do such things,” Hijab said. “We came to Geneva to show we are serious and to make a success, but [President] Assad is not serious.”

His group, the HNC “will not return unless we see progress in these areas,” Hijab said.

The US administration may have hoped that Russia could deliver the Syrian government to make concessions, but Assad may thwart any such pressure, especially on the political front, former US Syria envoy Robert Ford said.

American officials “hope that the Russians would deliver enough change in the Syrian government via the talks process that the Americans could deliver the Syrian opposition to accept a ‘national unity government,’” Ford, now a fellow at the Middle East Institute, told Al-Monitor by email.

But Syrian army “gains on the battlefield, quite sizeable now, give Assad more scope to stall [or] decline any unwelcome Russian advice,” Ford said, adding that the support of Iran gives Assad further ability to decline that Russian advice if it were ever to come.

However, Syrian government gains on the ground in recent days are likely to be met by an escalation backed by Turkey and Saudi Arabia, Ford suggested.

“I would be surprised if Turkey [and] Saudi roll over,” Ford said. “Wait for the next few acts in this thoroughly tragic horror show.”

If it is not willing to overthrow him militarily, the West may have to accept that Assad has won, said Fabrice Balanche, a French Syria scholar at the Washington Institute for Near East Policy.

Assad has shown “he is ready to destroy half of Syria, ready to send 10 million people out of the country,” Balanche told Al-Monitor in an interview Feb. 5. “He doesn’t joke.”

“Nevertheless, it is not certain that Turkey and Saudi Arabia [will] remain passive in front of the Russian-Iranian progress in Syria,” Balanche wrote in a forthcoming paper shared with Al-Monitor. It warns about the possibility that anti-aircraft missiles could end up in the hands of rebels, or that anti-Assad factions could open a new front in northern Lebanon. This would “directly threaten Tartus, Homs and the motorway to Damascus,” Balanche wrote. “The army of Assad would be outflanked and Hezbollah blocked in Lebanon. Does Saudi Arabia have the means for such action? Could [Saudi Defense Minister Mohammed bin] Salman take the initiative to destabilize Lebanon? Without such a black swan, it is difficult to see how the rebels could resist the Russian steamroller.”

While prospects for a Syria political process seem premature as facts on the ground change, there may be merit in trying, Syria analyst Aron Lund said.

“A ‘talk while you fight’ arrangement won't end the war, but it can perhaps limit the human suffering, allow for constructive engagement across the front lines on isolated issues, and pave the way for more meaningful political exchanges later on,” Lund wrote in an analysis previewing the Geneva talks at the Carnegie Endowment for International Peace.

“Of course, any number of things could go wrong along the way, and what happens on the battlefield will, at the end of the day, be more important.”