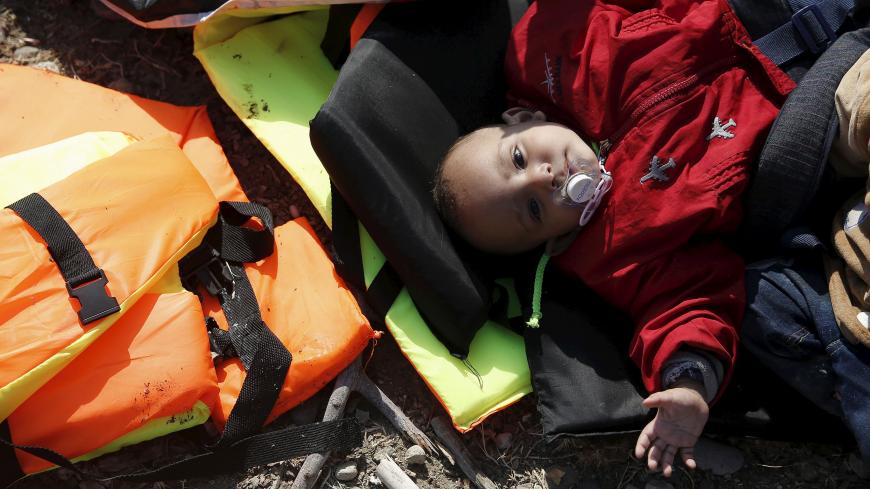 A baby from Syria lies on lifejackets moments after Syrian refugees arrive on a dinghy on the island of Lesbos, Greece, Aug. 23, 2015. Greece, mired in its worst economic crisis in generations, has been found largely unprepared for a mass influx of refugees, mainly Syrians. Arrivals have exceeded 160,000 this year, three times as high as in 2014. - REUTERS/Alkis Konstantinidis

The UN Security Council announced on Aug. 17 that Syria “has become the largest humanitarian emergency crisis in the world today, threatening peace and security in the region.”

It is a mark of despair that many will hardly consider this news, and that the scope of the Syrian tragedy — “at least 250,000 have been killed, including well over 10,000 children, and 12 million people have been forced to flee their homes, including over 4 million who have sought refuge in neighboring countries, and more than 12.2 million people in Syria require urgent humanitarian assistance,” according to the latest UN tally, has become so familiar that it no longer shocks, which is itself shocking.

We could of course note, in a review of the news of the week, the brutal killing by the Islamic State of two scholars of antiquities in Palmyra, the efforts to contain an outbreak of typhoid in the Yarmouk Palestinian refugee camp in Damascus, and the Syrian government’s bombing of a rebel-held town that reportedly killed 100 civilians and which the United Nations’ top official for humanitarian affairs, Stephen O’Brien, termed “appalling.”

It is also worth mentioning that the Security Council this week endorsed UN Special Envoy for Syria Staffan de Mistura’s plan to establish Syrian “thematic working groups” dealing with “safety and protection for all; political and legal issues; military, security and counterterrorism issues; and continuity of public services and reconstruction and development.”

It is perhaps no coincidence that the council’s endorsement of de Mistura’s effort came on the same day that Iranian Foreign Minister Mohammad Javad Zarif was in Moscow to meet his Russian counterpart, Sergey Lavrov. Zarif said at a press conference after their meeting that Iran and Russia hold a “common position” in seeking a political solution to the Syrian crisis that does not prejudge the fate of Syrian president Bashar al-Assad.

Lavrov termed “unacceptable” any conditions on the composition of a transitional government in Syria, which he and Zarif agreed can only be determined through meetings between representatives of the Syrian government and opposition groups.

Iran and Russia have been the most active parties seeking to bridge the gap between the Syrian government and opposition groups. Zarif’s stop in Moscow followed a tour of regional capitals to press Tehran’s own diplomacy on Syria, as discussed in this column last week. Zarif had been instrumental in Iran’s brokering a temporary humanitarian cease-fire between the Syrian government and Ahrar al-Sham and other factions around Idlib and Damascus.

Vitaly Naumkin, who has participated in Moscow-mediated meetings between Syrian government and opposition representatives, explains the increasing pivotal Russian role in regional diplomacy, including and especially regarding Syria: “Moscow believes a transitional governing body should be decided by consensus during inclusive negotiations among Syrians themselves. At the same time, Russian experts would like to see greater clarity in the strategy of the Syrian opposition in relation to the transition process. This applies, for example, to the issue of the future character of the Syrian state, which is a point of contention with leaders of the Kurdish groups. Compromise formulas like 'democratic decentralization' or 'pluralistic decentralization' look quite convincing, but they also elicit circumspection from the supporters of a centralized unitary state as well as all Arab nationalists. Still, it is clear to them that serious guarantees for the rights of all minorities in Syria are an essential element of any settlement. One provision in the platform of the National Coalition and a number of other opposition groups that raises questions among Russian experts is the issue of so-called 'transitional justice.' In this regard, it is feared that this principle could become an excuse to exact revenge against those whom the opposition wants to convince to share, or completely relinquish power. According to many analysts, the examples of South Africa, Cambodia and other countries — those which have experienced post-conflict transition while using the tool of amnesty and refusing to take revenge — look quite appealing.”

Arash Karami writes this week that Iranian media, while reporting on the effusively positive statements made by Zarif and Lavrov in Moscow about Russia-Iran relations, are asking about the status of the Russian missiles purchased by Iran.

Jean Aziz reports from Beirut on Zarif’s visit to Beirut and meeting with Hezbollah leader Hassan Nasrallah on Aug. 11, which, as Aziz describes, follows a familiar pattern: The “visit receives little media coverage, takes place at night and is always made public by a statement issued by Hezbollah accompanied by images published by its media offices alone.”

Aziz, who spoke with a member of Zarif’s diplomatic delegation, writes that “the meeting with Nasrallah was aimed at confirming Iran's ongoing support for the role of the resistance, exemplified by Hezbollah in Lebanon. Meanwhile, the meeting with the delegation representing Palestinian organizations was aimed at confirming that Iran’s policies toward the Arab world and the Middle East will continue to support the Palestinian cause. Also, the meeting with [Lebanese Deputy Prime Minister and Minister of Defense Samir] Mokbel was intended to emphasize Tehran’s lasting intention to support the Lebanese army and provide it with the weapons and ammunition it requires.”

Ayah Aman this week reports on the arbitrary detentions of young adults in Egypt, one of many actions by the Egyptian government that have concerned human rights activists. The hashtag #Al-Ikhtifa_al-Qasri_Garima (#Forced_Disappearance_Is_A_Crime) has been filling social media pages, and blogs are documenting forced disappearances and arrests of young adults as part of security campaigns that started in May in Cairo and in other governorates. Over three months have passed without knowing the detention place or details about the victims.

Mohamed Said writes from Cairo on how relations between the Egyptian government and the Muslim Brotherhood continue to deteriorate, despite an offer by Qatari Foreign Minister Khalid bin Mohammed al-Attiyah to mediate, which was rejected by Egypt’s Foreign Ministry on the grounds that the Brotherhood is a terrorist organization.

US, Turkish "Bay of Pigs" in Syria

David Ignatius writes in The Washington Post on Aug. 20 about the ill-fated Division 30, whose 54 members were trained by US special forces in Turkey, and which suffered a defeat by Jabhat al-Nusra forces soon after entering the battlefield last month. Ignatius reports that “Division 30’s difficulties illustrate US problems working with Turkey. The rebel group was composed mainly of Syrians from the Turkmen ethnic group, recruited from an area north of Aleppo. The United States had preferred a plan to insert Kurdish and other Sunni fighters closer to Raqqa, the Islamic State’s self-proclaimed capital. But the Turks vetoed that plan.”

Al-Monitor’s Fehim Tastekin broke the story of the divergent perspectives of US and Turkish authorities regarding the train-and-equip mission, including Turkey’s insistence on leading with Turkmen whose main preoccupation was toppling Assad, not defeating Islamic State. Tastekin wrote then that the envisioned forces to be trained would “be mostly Turkmens from the Damascus and Aleppo areas. The National Intelligence Organization (MIT) will select trainees based on certain criteria, including that the candidates are 'reliable' and see Syrian leader Bashar al-Assad as an "essential target."

Perhaps the most worrying revelation in Ignatius’ article is the report by a member of Division 30 that the group had “coordinated” with Jabhat al-Nusra before deploying to Syria, defying, it seems, the firewalls in the US vetting process. No surprise that Jabhat al-Nusra showed its lack of interest in working with US-trained forces and sabotaged Division 30 days after its arrival in Syria. This column has warned since December 2013 of efforts to “mainstream” radical Islamist groups, including Jabhat al-Nusra. In May of this year we wrote that “the evolution of these groups, now including the Army of Conquest, which is backed by Turkey and other US partners, would eventually end up as a means to mainstream forces like Jabhat al-Nusra. And this is exactly what is happening.”