Hezbollah’s leader says a political solution could include Syrian President Bashar al-Assad’s departure “after the end of his term”; Kerry supports Russia, UN diplomacy on Syria; Who does Israel back in Syria?; Did Turkey arm Jabhat al-Nusra?; Iran’s shallow influence in Yemen. 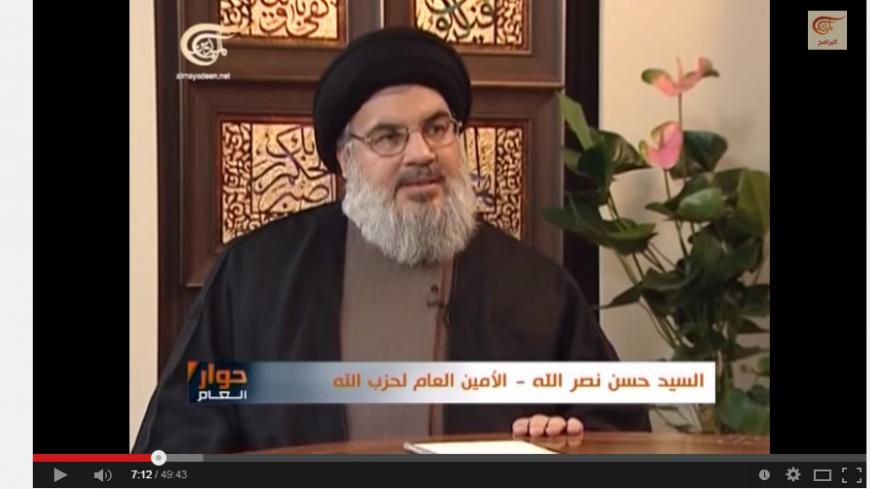 Nasrallah "between the lines" on Syria

As reported by Ali Hashem for Al-Monitor, Hezbollah Secretary-General Hassan Nasrallah’s remarks in an interview with Al Mayadeen TV on Jan. 15 may have seemed “offensive, non-conciliatory and threatening, yet between the lines, there were stances that could be seen as new and promising, mainly on Syria.”

While Nasrallah said that Syrian President Bashar al-Assad must be part of any political solution in Syria, he added, “Even if the political solution means that Assad should go after the end of his term, this should be in coordination with him.”

Nasrallah said, “A committee needs to be formed to review the constitution and reforms, and a dialogue established. Some might suggest that early parliamentary elections be held — this is what’s being suggested — or that the president give part of his powers to the Cabinet, not all his powers.”

Nasrallah said that Hamas' relations with the “resistance bloc” — Iran, Syria and Hezbollah — may be improved, with some way to go before normal relations are restored.

On Israel, while the Hezbollah leader boasted of its advanced missile capabilities, he also acknowledged what is an otherwise stable "deterrent" relationship: “There is deterrence on both sides of the border. If the resistance decides to force a confrontation, it should be aware that Israel is a strong enemy and the Israelis also know the resistance is strong and capable.”

UN Special Envoy for Syria Staffan de Mistura said on Jan. 15 that the continued violence in Syria is a “disgrace” and that the Syria conflict is “the largest humanitarian crisis since the Second World War.” Syrians have replaced Afghans as the world’s largest refugee population, with 7.6 million displaced and 3.3 million refugees, in addition to a death toll estimated at 200,000, and the return of typhoid, measles and polio to the country.

On Jan. 14, de Mistura got a boost from US Secretary of State John Kerry, who praised UN and Russian efforts to broker a settlement in Syria.

Speaking after his meeting with de Mistura, Kerry said, “We hope that the Russian efforts could be helpful. We hope that the UN efforts led by Special Envoy de Mistura can have effect, and we wanted to meet today to talk about this, and I wish him well. He’s heading to Damascus next week, and this issue still remains very much on our front burner and we will continue to work with you.”

This column has previously highlighted Russian and UN diplomacy as at least a complement to the probably ultimately quixotic US "train-and-equip" mission to build a moderate armed Syrian opposition force capable of holding its own against the Islamic State, al-Qaeda-affiliated Jabhat al-Nusra or the Syrian government.

The Syrian war, of course, is not on hold while awaiting the arrival of this force, which could be months or even years in the making.

De Mistura’s call for a "freeze" of the conflict in Aleppo would likely be well received by the city’s beleaguered citizens, some of whom are so despondent over the endless killing and suffering, they are willing to consider the relative order brought by the rule of Jabhat al-Nusra.

Shelly Kittleson reports from Aleppo, “The general consensus among most Syrians Al-Monitor spoke to is that those in opposition areas have little choice but to see the al-Qaeda affiliate as its main bulwark against a power that has been killing and starving them for years, even if they reject its ideology.”

Khaled Atallah reports this week on speculation that Israel is supporting Syrian opposition forces battling the Syrian army in the Golan Heights, along the Israeli border:

“According to a UN report covering the period from March to May 2014, the United Nations Disengagement Observer Force (UNDOF) detected contact between rebels and the Israeli army across the Golan cease-fire line, particularly during fierce clashes between the Syrian army and the rebels.”

The report also notes that wounded fighters have been transferred back and forth by the Israel Defense Forces (IDF) and that, “On one occasion, UNDOF observed the IDF on the Alpha side handing over two boxes to armed members of the opposition on the Bravo side.”

Leaked documents relating to the discovery of three trucks carrying weapons across the Syrian border in January 2014 surfaced this week indicating that Turkey’s intelligence service (MIT) may have actively supported jihadist groups in Syria and possibly transferred weapons to Jabhat al-Nusra.

Fehim Tastekin reports, “The Gendarmerie General Command, which authored the reports, alleged, 'The trucks were carrying weapons and supplies to the al-Qaeda terror organization.' But Turkish readers could not see the documents in the news bulletins and newspapers that shared them, because the government immediately obtained a court injunction banning all reporting about the affair.”

Criticism of Turkey's policies in Syria has been growing prior to the revelations of the leaked documents.

Mike Rogers, a Republican who is the former chairman of the House Permanent Select Committee on Intelligence, questioned Turkey’s commitment to the NATO alliance in an interview with Andrew Parasiliti:

“I think that we have to have a public discussion about Turkey’s role in NATO. They certainly want all the benefits of NATO but they want none of the responsibility. I am very, very concerned that they’re trying to have it both ways,” Rogers said.

Semih Idiz writes that Turkish Prime Minister Ahmet Davutoglu has vigorously defended his country’s policies, asking for intelligence help to stop terrorists and pointing out the difficulties of securing the border with Syria:

“Is it Turkey’s fault that is has a border with Syria?” Davutoglu retorted, going on to explain that 35 million tourists visit Turkey every year. “We cannot treat people as terrorists by merely looking at their names. We have to be given intelligence.”

Still, the reports suggest that Ankara is playing a dangerous game by supporting the removal of Assad at any cost with little thought to the consequences. This column warned against the risk of blowback in January of the last year, saying, “Turkey is, more than ever, threatened by al-Qaeda-linked terrorists who are operating in Syria.”

In September of last year, a UN Security Council session chaired by US President Barack Obama passed Resolution 2178, which threatened sanctions against countries that assist foreign fighters in Syria.

"No state" in Yemen

Maysaa Shuja al-Deen writes that the commonly held notion that Iran scored a victory with the takeover of Sanaa by the Houthi Shiite insurgent group in September requires a broader context; Yemen is a failed state.

“Iranians are very wrong to believe that the delicate situation in Yemen ended with the Houthis’ control of the capital. In Beirut, Iran has extensive influence held by Hezbollah, which is playing its political role as part of a specific and clear process divided among different parties. In Syria, the sectarian dimension of the regime has only just appeared. In the past, this dimension was marginal in a regime leaning more to nationalistic dictatorships, such as the Baath Party in Iraq. In Iraq itself, the situation is also different. A sectarian regime was established there and favored Shiites after the US invasion in 2003. However, in Yemen, things are completely different, since there is no state and the real power of the president and government is almost totally absent.”